The Israel Defense Forces (IDF) found and destroyed a 30-meter-deep tunnel in Eshkol, in the Negev desert of southern Israel.  The tunnel, which was found a few dozen meters from the border fence with Gaza, was discovered using Israel’s new tunnel detection technology.

The tunnel, which Hamas built to infiltrate Israel and execute terror attacks against southern Israeli communities, is the first to be found since Operation Protective Edge.

“The ugly truth is that Hamas continues to invest millions of dollars to build tunnels of terror and death.  The tunnel uncovered in Israel demonstrates once more Hamas’ warped priorities and continued commitment and investment in tools of violence,” IDF Spokesperson, Lt. Col. Peter Lerner said.  “This tunnel exposes Hamas’ abhorrent intentions to attack the men, women and children of southern Israel.”

The tunnel shaft was far enough away from the residential areas for engineers and elite fighters to destroy the shaft with a focused detonation device.  The IDF released footage of the operation, showing how they drilled down to film inside the shaft before destroying the accessible portion of the tunnel.

Israeli Prime Minister Benjamin Netanyahu described the tunnel-tracking technology as one of a kind.

“In recent days, the State of Israel has achieved a world breakthrough in its efforts to locate tunnels.  That doesn’t exist anywhere else.  We checked the entire world,” Netanyahu said on April 18.

Gadi Yarkoni, head of the Eshkol Regional Council, has called the tunnel’s neutralization a “watershed event for residents of the Gaza periphery, symbolizing a breakthrough in combating the looming threat.”

“The fear of the tunnels in the communities adjacent to the border fence is legitimate and leaves the locals feeling unprotected, as they were in the time before safe rooms that could withstand rocket attacks were built,” Yarkoni wrote.  (Israel HaYom)

“We have been demanding that the matter be made a top political and defense priority if the country wants to keep the area populated,” he stated, adding,  “The threat is not only to the residents of the Eshkol region and the entire Gaza periphery, but also a strategic threat against all of Israel.”

“The challenge is very big.  The tunnels are very deep,” a senior security official told The Jerusalem Post.   “We can detect them at depths of 30 to 40 meters. … It is a very complex process” that remains classified, he said.

The technology, however, features components that are “systematic, intelligence-based, technological, engineering and operational” and results from a collaboration between Israeli defense industries, IDF Engineering Corps units, and the Shin Bet (Israeli Security Agency). 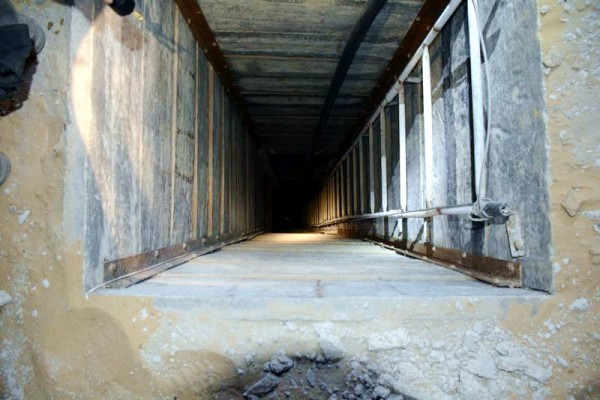 While the “entire world” doesn’t need to combat an invasion of underground terrorists, Israel’s government “is investing a fortune in thwarting the threat of tunnels.  This is an ongoing effort,” Netanyahu said, in which Israel will continue to invest “steadily and firmly.”

“Israel will respond forcefully to any attempt by Hamas to attack its soldiers and to attack its citizens.  I’m sure that Hamas understands this very well,” he said.

Meanwhile, the Qassam Brigades — Hamas’ military wing — tried to use the tunnel discovery to stir up more fear in the hearts of the Israeli people.

“The preparation for war continues in all areas, and what the enemy uncovered today is but a drop in a sea of moves the resistance has prepared in order to protect its people, free its prisoners and liberate its land,” the Qassam Brigades stated last Monday.

But “this is what the Sovereign Lord says” to Israel’s enemies:

“Because you have clapped your hands and stamped your feet, rejoicing with all the malice of your heart against the land of Israel, therefore I will stretch out my hand against you and give you as plunder to the nations.  I will wipe you out from among the nations and exterminate you from the countries.  I will destroy you, and you will know that I am the Lord.’”  (Ezekiel 5:6-7)