“You stretch out your right hand, and the earth swallows your enemies.  In your unfailing love you will lead the people you have redeemed.”  (Exodus 15:12–13)

Netanyahu said he wanted to avoid “misunderstandings” between Russia and Israel, while describing to Putin the cooperation of the Syrian army with Iran and Hezbollah in building a terror network against Israel from the north.

Iran and Syria have been arming Hezbollah, an Iranian proxy, “over the last number of years and even more-so over the last few months,” Netanyahu told Putin, showing him intelligence that Syria has tried to smuggle Russian artillery to Hezbollah.

Iran, as well, is working to “build a second terrorist front against us from the Golan Heights” using the Syrian army, Netanyahu said.  (TOI)

“Our policy is to prevent these weapons transfers, and to prevent the formation of a terror front and attacks against us from the territory of the Golan.  In these circumstances, I thought it was very important that I come here, both to clarify our policy and to make sure there are no misunderstandings between our forces,” Netanyahu said.  “Israel and Russia have a shared interest to ensure stability in the Middle East.” 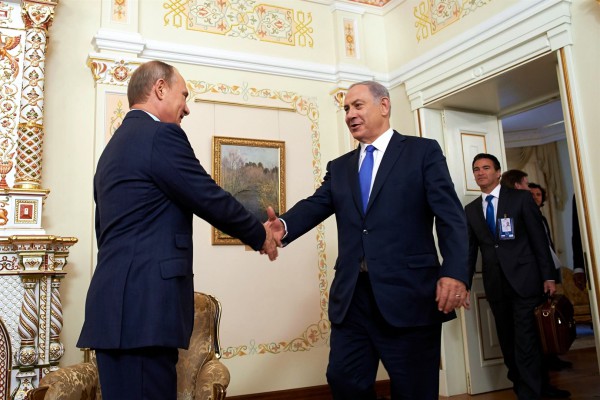 The meeting was reportedly cordial, with Putin promising that “all of Russia’s actions in the region will always be very responsible.”  He also condemned attacks against Israel.

“We are aware of the shelling against Israel and we condemn all such shelling.  I know that these shellings are carried out by internal elements,” Putin told Netanyahu.

“I understand your concern and I am very pleased that you have come here to discuss all issues in detail,” Putin said.  “We never forget that a great many expats from the Soviet Union live in the State of Israel, and that has a special impact on relations between the countries.”  (JP)

While Putin has backed Syria’s President Bashar al-Assad throughout Syria’s brutal war, which began in March 2011, United States Secretary of State John Kerry has told Russia that its “continued support for Assad risks escalating the conflict and undermining our shared goal of fighting extremism.”

Syria faces the threat of the Islamic State in addition to continued devastation from the war between Assad’s regime and the rebel factions, which has had a staggering cost of about 310,000 lives.  (CNN) 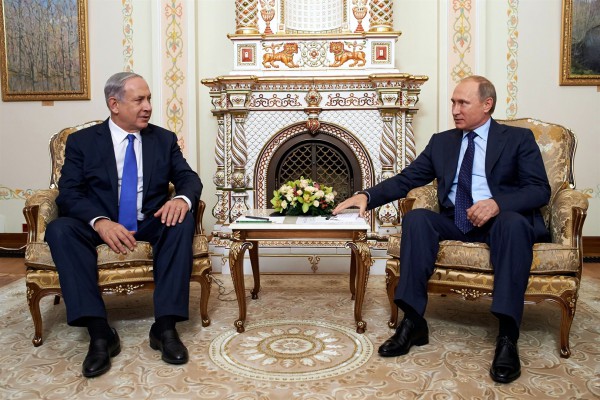 With its presence in Syria, Putin told Netanyahu that Russia’s “main goal is to defend the Syrian state.”

However, with two million Syrians displaced, Aleppo native and Illinois resident Attar told WorldPost this March, “ISIS consumes the media, but the Assad regime’s barrel bombs are treated as the norm.  It is not normal or acceptable for any government in the world to deploy an air force to indiscriminately bomb its own people.  But the world has decided to turn a blind eye to this crushing, daily brutality and has left the Syrian people to suffer under two terrors: the Assad regime and ISIS militias.”

The United States, France, Britain and others have shown concern at Russia’s “very significant” buildup in Syria.

French Defense Minister Jean-Yves Le Drian said that “everyone can see the very significant buildup of Russian forces both in the port of Tartus and above all, with the setting-up of a military airport to the south of Latakia and the presence of several fighter jets, combat helicopters and drone capacity there.”  He called on Moscow to justify its actions in Syria.  (Yahoo)

The United States also noted four Russian military helicopters touched down in Syria last Wednesday, with Secretary of State John Kerry stating that he is not taking Russia’s claims to be intervening against the Islamic State “at face value.”

“We look at the type of airplanes or the types of munitions and so forth, and it obviously raises much more serious questions about what is happening,” Kerry told CNN on September 16, three days after satellite images showed preparation for two additional military bases in Syria “for the arrival of a significant number of Russian ground troops.” 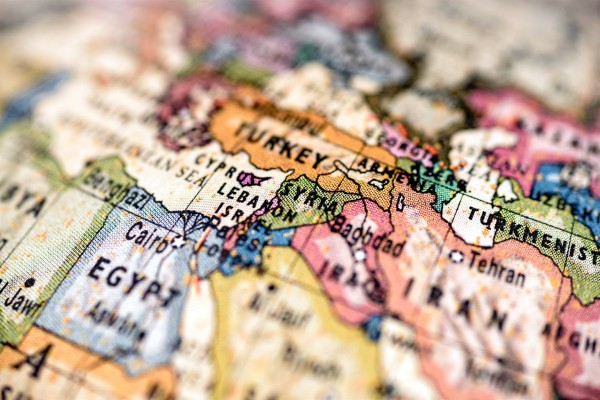 The joint mechanism discussed by the heads of state and confirmed Thursday by an anonymous senior Israeli official will bring the deputy chiefs of both Israel’s and Russia’s militaries together, starting next week, to talk over the countries’ movements.  (YNet)

Russia stated Thursday that it is soon to start naval drills in the eastern Mediterranean, while a senior Israeli official announced a joint military mechanism to avoid unintended conflict between Russia and Israel as Russia’s presence in Syria continues to grow.

According to Russia’s Defense Ministry, its naval drills in the Mediterranean — planned for September and October — have been scheduled since early 2013 and are not connected to the Syrian conflict.  They will involve “40 combat exercises, including rocket and artillery fire at sea and airborne targets,” states the Russian Ministry, which listed three warships among the practice vessels.  (YNet)

The agreed-upon mechanism will allow the deputy chiefs to organize aerial, naval and electromagnetic operations in Syria that should retain airspace for the Israeli Air Force to issue strikes in response to potshots at Israel by various Syrian factions.

Stray rockets and bullets from Syria into northern Israel have kept the Jewish state on alert as Syria’s 4.5-year civil war continues.  (AP)

According to a September 21 Al Arabiya report, Israel has agreed to provide Putin “high-quality intelligence” about movements in Syria if Russia will “rein in” Iran and Hezbollah and agree not to interfere when Israel defends itself against attacks.  (Algemeiner)

Of course, this move into Syria provokes images of the Gog and Magog war described in Ezekiel 38–39, which Bibles For Israel is closely monitoring, along with Iran’s growing coalition in the region.

“Son of man, prophesy and say to Gog: ‘This is what the Sovereign Lord says: In that day, when my people Israel are living in safety, will you not take notice of it? You will come from your place in the far north, you and many nations with you, all of them riding on horses, a great horde, a mighty army.

‘You will advance against my people Israel like a cloud that covers the land. In days to come, Gog, I will bring you against my land, so that the nations may know me when I am proved holy through you before their eyes.'”  (Ezekiel 38:14–16)