Jewish Group Raises $17,000 to Help Restore Church of the Multiplication 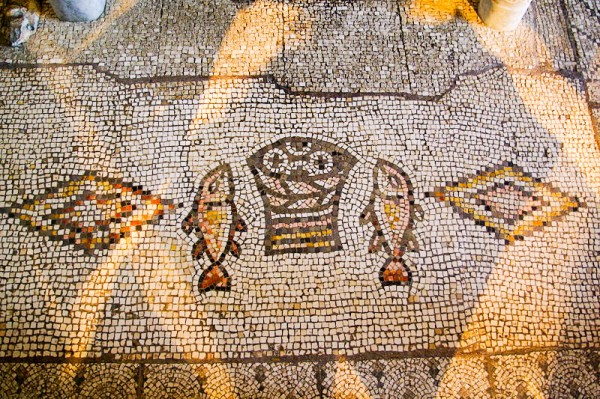 Tabgha, which is on the northwestern shore of the Sea of Galilee, is the traditional site of the multiplication of the loaves and fishes.  The above mosaic is found in the Church of the Multiplication in Tabgha.

“Taking the five loaves and the two fish and looking up to heaven, he gave thanks and broke them. Then he gave them to the disciples to distribute to the people.”  (Luke 9:16)

Two months after extremists burned Israel’s Church of the Multiplication, a group of Orthodox rabbis led by Rabbi Dr. Alon Goshen-Gottstein has raised more than $17,500 to restore the Tabgha-based church’s friendship center, where monks meet with international visitors of all faiths.

Goshen-Gottstein’s “Restoring Friendship” campaign condemned the “religiously based hatred” of the arsonists, who also marked the church entrance with anti-Christian graffiti:  “May the false gods be eliminated,” an excerpt from a Hebrew prayer.

“This is the first time that Jews burn a church with a religious text as support.  We cannot remain silent in the face of such a show of hatred in the name of religion,” Goshen-Gottstein’s campaign letter states.

Goshen-Gottstein elaborated to Times of Israel: “This is the first time that they did something based on a quote from the sources.  That’s a qualitative change, something completely different, and therefore people have to speak in the voice of religion and say ‘no’.” 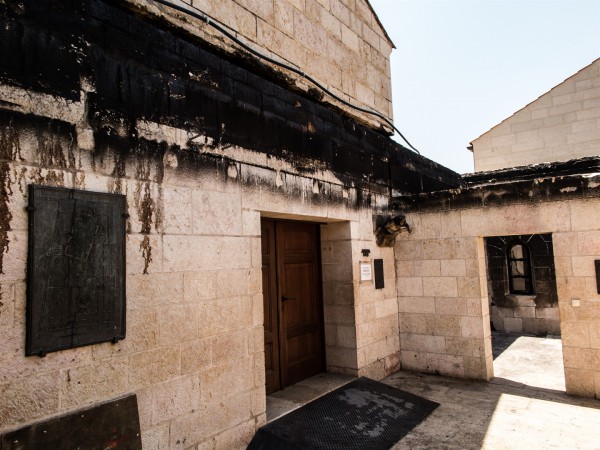 Arson destroyed part of the Church of Multiplication.

After the arson, the Israel Security Agency (Shin Bet) arrested five suspects from a group that has been linked to past attacks on Christian sites.  The group “holds to an extremist ideology that aspires to change the regime and bring about the redemption via various stages of action,” writes the Government Press Office.

Goshen-Gottstein, who is also the director of the Elijah Interfaith Institute, added that words of condemnation are not a sufficient response to the arson, which badly scarred the property and resulted in two people suffering from minor smoke inhalation.

“At a time when we are facing a tidal wave of delegitimation, religious extremism undermines our collective existence,” he explains.  (blogs.timesofisrael)

“Our Judaism builds;  it does not destroy,”  he wrote on the project blog.  “We must deliver a message of repair where others have delivered a message of hatred and destruction.”  (mimoona)

This Roman Catholic church near the Sea of Galilee, which sees 5,000 daily visitors, is linked to Messiah Yeshua’s (Jesus’) miracle of the five loaves and two fish.

Goshen-Gottstein’s campaign to restore the church’s Friendship Center for Interfaith Encounter has also seen a multiplication of support.  Goshen-Gottstein and the Elijah Interfaith Institute partnered with anti-hate-crime group Tag Meir and interfaith group Mosaica and has drawn the support of 16 top rabbis.

“As a Jew, I felt humiliated by the arson and I hope this will contribute not only to the church but, especially, to tolerance between all faiths,” he said. 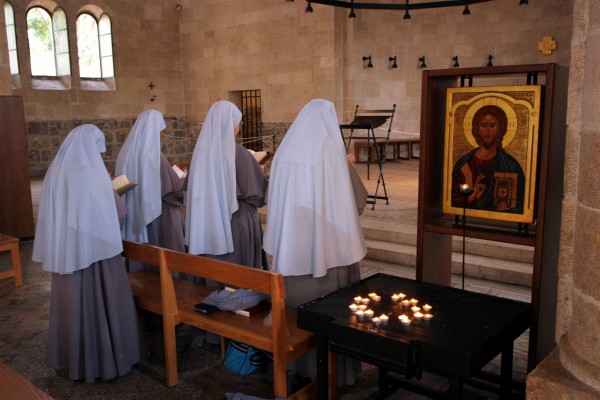 Nuns pray in the Church of the Multiplication of Loaves and Fishes in Tabgha.

In June, Israeli Prime Minister Benjamin Netanyahu also condemned the arson in a conversation with Father Gregory Collins of the Order of Saint Benedict in Israel the morning of the attack, and in an official statement.

“Israel’s freedom of religion is a cornerstone of our values and it is anchored in the law,” Netanyahu states, adding that the arson is “an attack on all of us.”

“We will mete out justice to those responsible for this atrocious act.  We have no room for hatred and intolerance in our society,” he said.

On June 21, Monsignor Giacinto-Boulos Marcuzzo, Latin patriarchal vicar of the Church of the Multiplication, told the Huffington Post that Israelis on the street were expressing support to the Catholic community.

“This time the impact was felt by all inhabitants, especially on the popular level. Walking along the streets of Haifa, or waiting for green light at road junctions, Muslims or Jews would tell us: ‘Father, we regret what happened in Tabgha; you have our full solidarity,’” Marcuzzo said.