“I am sending you out like sheep among wolves.  Therefore be as shrewd as snakes and as innocent as doves.”  (Matthew 10:16)

The United Nations Security Council held an emergency meeting on Friday to discuss the intensifying Palestinian violence in Israel, which includes the burning of Joseph’s Tomb on Thursday night. 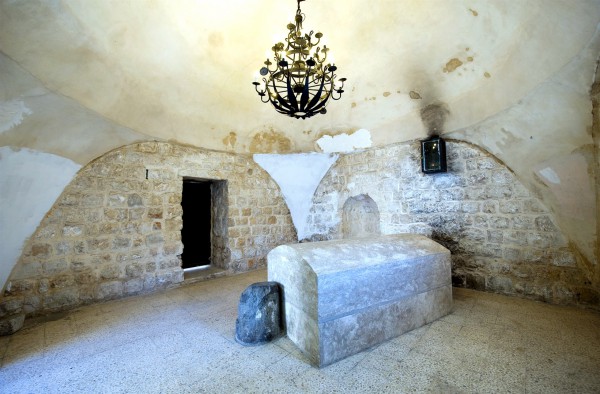 Joseph’s Tomb (Kever Yosef) is located at the eastern entrance to the valley that separates Mounts Gerizim and Ebal.  It is 325 yards northwest of Jacob’s Well, on the outskirts of the West Bank city of Nablus, the area in which the Biblical city of Shechem was located.

As pressing fears make it difficult for Israelis to enjoy normal activities, such as shopping to prepare for the Shabbat, or taking a bus to work, or bringing children to school, Israel’s new Ambassador to the United Nations Danny Danon emphasized the need for a “loud and clear” condemnation of Palestinian incitement.

Last Wednesday, in a message to UN Secretary-General Ban Ki-moon and the UN Security Council, Danon said about the current wave of “lone-wolf” Palestinian terror attacks, “Such acts of pitiless slaughter do not occur in a vacuum.  They are a direct result of Palestinian incitement, deliberately directed to inflame Palestinian children’s minds with hate.” 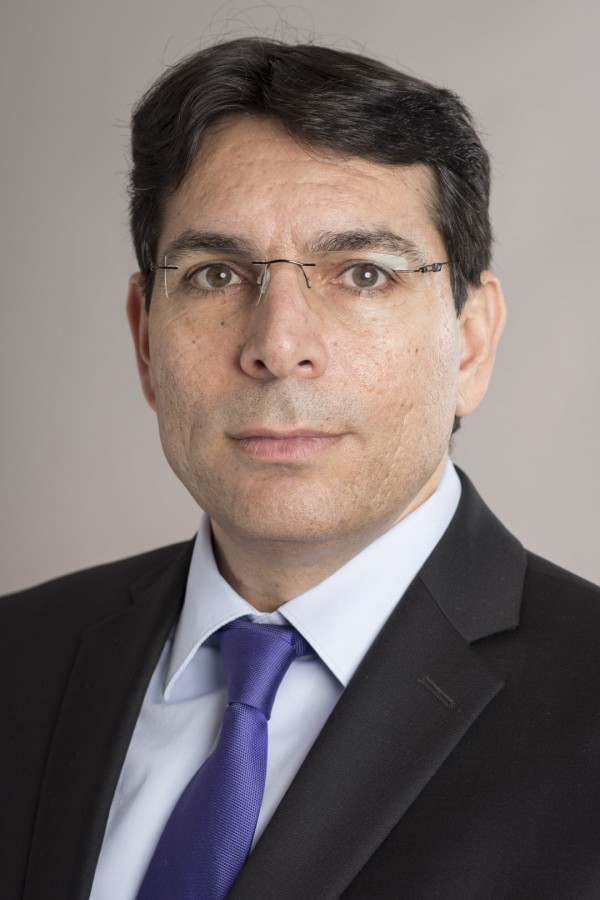 Danon told The Algemeiner at his New York office that he would combat the moral equivalency used by many in the UN and by other national governments, including the United States, when discussing the conflict in Israel.  (Algemeiner)

“When someone says that he calls on all sides to stop the violence, I will fight that,” Danon said.  “It’s not all sides.  It’s one side who is the aggressor — who’s sending kids to murder other kids.  And the other side is protecting itself.”

Danon told the organization on Friday that it should promote peaceful negotiations as a way to resolving differences between Palestinians and Israelis.

“If you are serious about promoting peace, if you are really committed to advancing co-existence in our region, make a clear statement against the incitement that fuels terror, support direct negotiations,” Danon said.

At a press conference before the meeting, the new UN ambassador said that if there is to be peace in the region, Palestinian children need to be prepared for that rather than brainwashed to commit murder of ordinary Israeli citizens.

“When a Palestinian child opens the television he doesn’t see Barney or Donald Duck, he sees murderers portrayed as heroes,” he said.  “When he opens a textbook to do his homework, he doesn’t learn about math and science, he is being taught to hate.”

Showing the journalists a drawing entitled “How to stab a Jew,” the ambassador said, “We talk a lot about incitement here in the UN.  You can see with this picture what incitement looks like.”

“Whoever avoids direct negotiations is looking for an escape hatch,” he added.  “Abbas’ favorite kind of escape is to spread slanderous lies about the situation on the Temple Mount, especially about the status quo.” 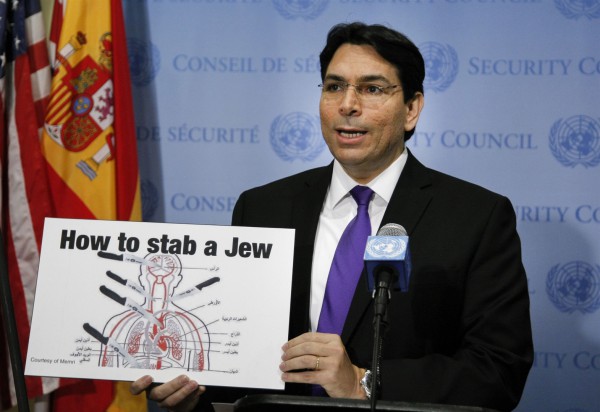 Danny Danon, new Permanent Representative of Israel to the United Nations, briefs the press on the Middle East situation, including the Palestinian question.  (UN photo by Loey Felipe)

He also told journalists that “an international presence on the Temple Mount would violate the status quo of the last several decades.”  (Haaretz)

While Danon did not attend the UN meeting Friday night, his deputy, David Roet, did attend.

“We face an enemy who is willing to die in order to kill,” Roet said.  “Israel is taking every necessary means to defend its citizens and is responding proportionately to these attacks.” 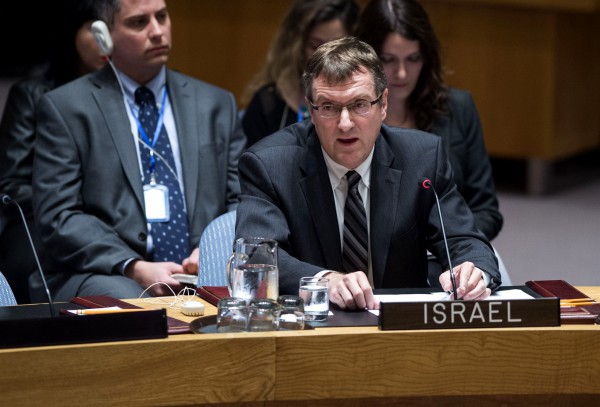 The Palestinian representative at the UN, Riyad Mansour, however, asked the Security Council to “intervene to end this aggression against the defenseless Palestinian people.”

“Israel, the occupying power, is responsible for bringing us to this dangerous situation, and we have to hold it responsible for its illegal violations of international law,” he said, blaming the violence on Israeli settlers’ “provocations” on the Temple Mount.  In reality, the provocations to which he refers are simply Jewish people visiting the Mount.

“We believe that this terror and aggression will not weaken our determination to fight against the occupation peacefully and achieve our sovereign state with east Jerusalem as its capital,” Mansour added.

Palestinians, however, do not seek peace and do not wish to protect freedom of religion at Israel’s holy sites, but to erase all evidence of the Jewish connection to the Holy Land. 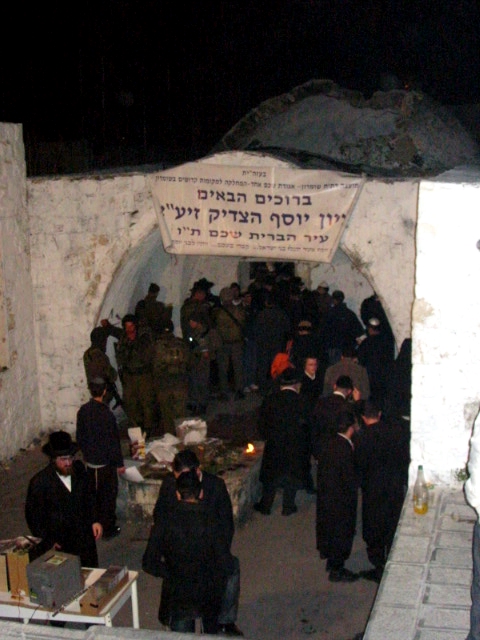 This was clearly illustrated overnight Thursday, just ahead of the day of rage called by Hamas.  Palestinian rioters set fire to Joseph’s Tomb compound, which is located near the Biblical city of Shechem.

“The burning and desecration of Joseph’s Tomb last night is a blatant violation and contradiction of the basic value of freedom of worship.  The IDF will take all measures to bring the perpetrators of this despicable act to justice, restore the site to its previous condition and ensure that the freedom of worship returns to Joseph’s Tomb,” IDF Spokesman Lt. Col. Peter Lerner said in a statement Friday morning.

“The fire illustrates what would happen to Jerusalem’s holy places if they were in the hands of the Palestinian Authority [PA],” Foreign Ministry Director-General Dore Gold said.  “Only Israel can protect the places that are holy to all religions in Jerusalem.”

“The attack is reminiscent of the action of Islamist extremists in Afghanistan and Libya,” Gold said.

Avigdor Liberman, who is the head of the Yisrael Beytenu party, said, “The arson of Joseph’s Tomb tonight proves that the management of the Palestinian Authority is no different from that of ISIS (Islamic State).  And after the Palestinian youths took machetes and knives to kill Jews now they’re also burning holy places and historical heritage sites, just like ISIS members do to heritage sites of the human civilization in Iraq and Syria.”

“The arson at Joseph’s Tomb by a Palestinian mob that was incited by the lies of (PA Chairman Mahmoud) Abbas and led by Fatah activists only raises the surprise over those who even today refuse to see the bloody writing on the burned walls which says that Abbas never was, is or will be a partner, and yet they still call and are ready to meet and speak with him.”

“This couldn’t have happened without PA involvement,” he emphasized.

“The tomb is not under Israeli sovereignty, and in spite of that, the Palestinians set it on fire.  They are trying to rewrite history by harming Jewish holy places that bear testament to our deep connection to the Land of Israel,” Deputy Foreign Minister Tzipi Hotovely said. 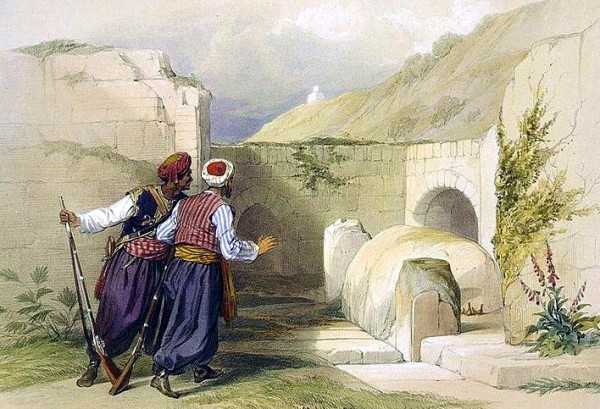 Tomb of Joseph at Shechem (1839), by David Roberts

While the tomb is currently under the control of the Palestinian Authority, it should be under Jewish control according to the 1994 Oslo Accords.

Jewish worship has been severely limited at the tomb ever since the start of the Second Intifada in October 2000, after an Israeli border policeman was killed there during clashes with Palestinians.

“The arson of one of the holiest sites to the Jewish nation is an additional low, and the result of Palestinian incitement,” Agriculture Minister Uri Ariel said Friday.

“Even as the Palestinians shamelessly lie about (Israel) harming the status quo on the Temple Mount, they themselves are burning and desecrating the holy sites of Israel, and this cannot be forgiven,” he added.