Netanyahu and Obama Strengthen Ties at the White House

“Unless the Lord builds the house, the builders labor in vain.  Unless the Lord watches over the city, the guards stand watch in vain.”  (Psalm 127:1)

On Monday, Israeli Prime Minister Benjamin Netanyahu met with United States President Barack Obama at the White House — the first meeting between the two in a very eventful year.

For two and a half hours, Netanyahu and Obama discussed (in the words of Obama), “some of the most pressing security issues that both our countries face,” including “how we can blunt the activities of ISIL, Hezbollah [and] other organizations in the region that carry out terrorist attacks.”

Despite the strain created by Netanyahu’s opposition to the Iran nuclear deal, the meeting went well with Netanyahu calling it “one of the best meetings I’ve had with him [Obama].” 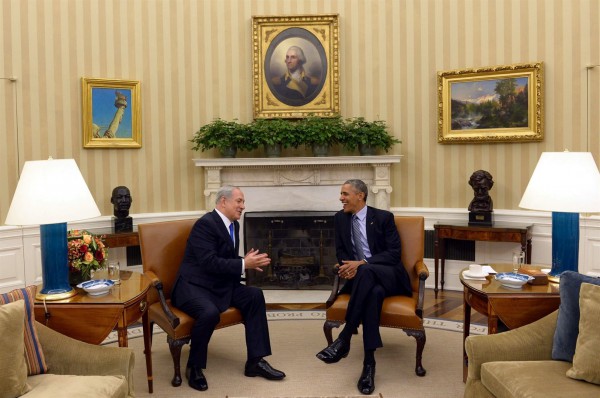 The leaders sought to weigh Iran’s implementation of the nuclear agreement with Iran’s destabilizing activities in the Middle East, address the chaos in Syria, and lower tensions between the Israelis and Palestinian Authority.

Those tensions rose sharply on the Jewish New Year after which Palestinian and Israeli Arabs have been committing multiple attacks against other Israelis and Jews.

“I don’t think that anyone should doubt Israel’s determination to defend itself against terror and destruction; but neither should anyone doubt Israel’s willingness to make peace with any of its neighbors that genuinely want to achieve peace with it,” Netanyahu said.

In reference to the Islamic State’s savagery and Iranian aggression and terror, Netanyahu stated, “The combination of turbulence has now displaced millions of people, has butchered hundreds of thousands, and we don’t know what will transpire.” 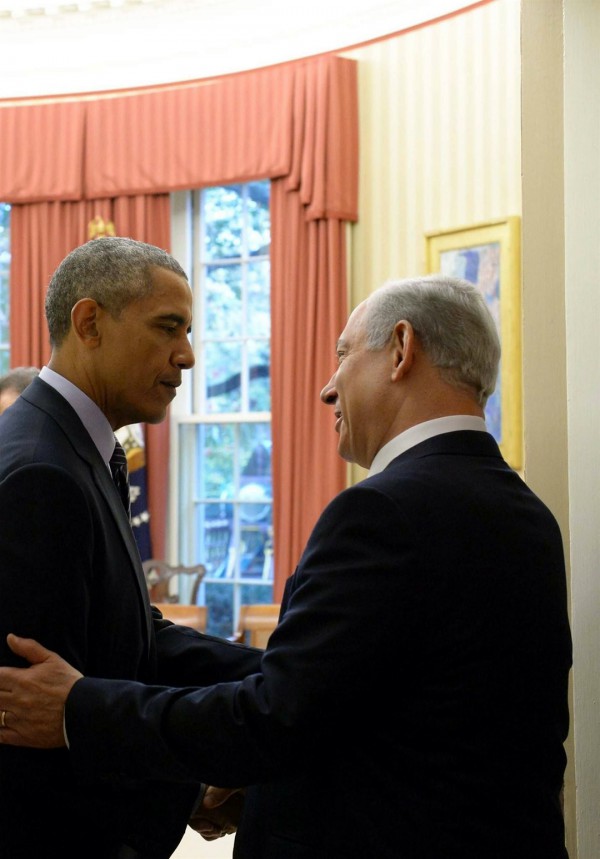 “I think this is a tremendously important opportunity for us to work together to see how we can defend ourselves against this aggression, this terror, how we can roll it back; it’s a daunting task,” Netanyahu added.

“Equally I want to make it clear that we have not given up our hope for peace; we’ll never give up our hope for peace,” he said.  “And I remain committed to a vision of peace of two states for two peoples, a demilitarized Palestinian state that recognizes the Jewish state.”

The president described Netanyahu’s visit as “an opportunity to discuss some of the concerns that both of us have about the violence in the Palestinian territories,” seemingly ascribing Palestinian status to Judea and Samaria.  Yet he did not ask of Netanyahu to freeze settlement building, the prime minister said the next day.

To the press, Obama said, “I want to be very clear that we condemn in the strongest terms Palestinian violence against innocent Israeli citizens, and I want to repeat once again it is my strong belief that Israel has not just the right but the obligation to protect itself.”

For the US, “the military assistance that we provide, we consider not only an important part of our obligation to the security of the State of Israel, but also an important part of US security infrastructure in the region, as we make sure that one of our closest allies can not only protect itself but can also work with us in deterring terrorism and other security threats,” Obama had said minutes before, naming Israel’s security as one of his top foreign-policy priorities.

The two leaders also discussed updating the Memorandum of Understanding signed in 1981, which outlines strategic cooperation policies and procedures between the US and Israel regarding the Soviet threat in the region.  The agreement is currently slated to expire in 2017.

“We’re with each other in more ways than one, and I want to thank you for this opportunity to strengthen our friendship [and] our alliance,” Netanyahu said to Obama.  “I think it’s rooted in shared values; it’s buttressed by shared interests; it’s driven forward by a sense of a shared destiny.”