“Zion stretches out her hands, but there is no one to comfort her.  The Lord has decreed for Jacob that his neighbors become his foes; Jerusalem has become an unclean thing among them.”  (Lamentations 1:17)

Just in time for the Jewish holy holidays, Muslim violence in Jerusalem and on the Temple Mount has once again brought condemnation to Israel.

Jerusalem received 800 extra police officers to monitor an expected Muslim “day of rage” on Friday after a week of escalated attacks around Israel, including a fatal rock attack against a Jerusalem motorist on the night of Rosh HaShanah (Jewish New Year).  (JPost)

Overnight Thursday, two Palestinian men also attacked an Israeli car near Nablus with a firebomb, with the female driver losing control and flipping her car, but escaping unharmed.

Nearby security forces shot one of the two suspects and placed the other under arrest; medics took the injured suspect to the hospital.  (TOI)

Last Sunday night, in a similar attack, an unnamed criminal threw rocks at passing cars until he hit a windshield that belonged to the car of 64-year-old Alexander Levlovich, who was driving home from a family Rosh HaShanah dinner.

Levlovich lost visibility and control of the car, crashed into an electricity pole and died; his two passengers were lightly injured.

Visiting the crash site on Wednesday, Israeli Prime Minister Benjamin Netanyahu called the act “murder,” stating, “This stone is one too many.  We are declaring war on those who throw stones and bottles, and rioters.”

Even so, stone-throwing and other violence continues. 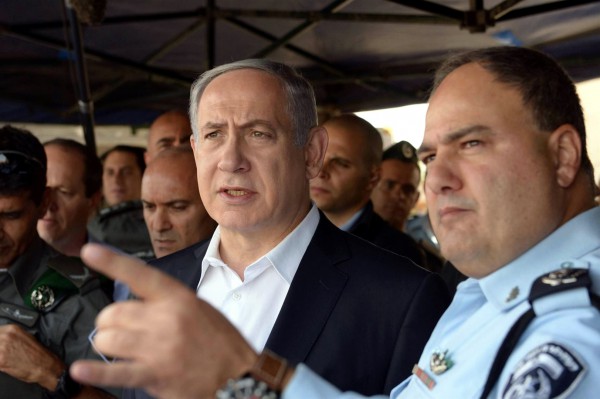 On Monday, a pair of youth hurled stones injuring an Israeli police officer, and along a street near the Old City, multiple Muslims attacked an Orthodox Jewish teenager.  (JPost)

Also Monday, rioters threw rocks and flares at police forces working security on the Temple Mount.  The Muslim anarchists tried to use the al-Aqsa Mosque as a barricade, but police corralled the rioters inside the mosque and locked the doors.

“We’re changing the policy to a war on stone-throwers, not just in Jerusalem and the roads leading to it, but also in the Galilee and the Negev,” Netanyahu announced.  “The existing situation is unacceptable and we intend to give the tools—to both soldiers and policemen—to take very severe action against the rock throwers and the firebomb throwers.”

According to Netanyahu, Israel will allow open-fire orders in certain cases and increase the minimum sentence to 4–5 years in prison for throwing rocks and 10 years for throwing firebombs, as well as a sharp increase in fines against the parents of guilty minors, amounting to NIS 100,000 ($26,000).  (Channel 2)

However, the Knesset (parliament) must approve such measures. 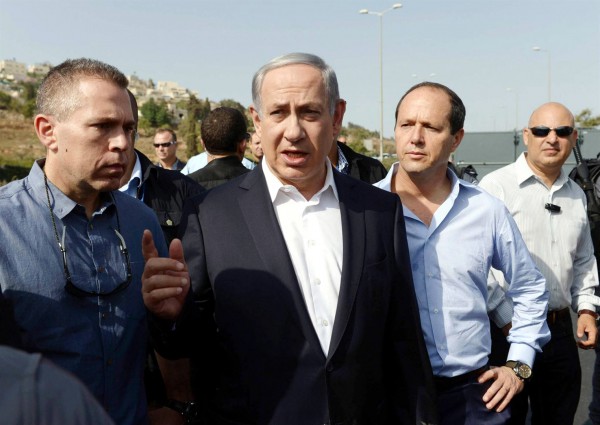 US State Department spokesman John Kirby strongly condemned “all acts of violence,” adding that, “it is absolutely critical that all sides exercise restraint, refrain from provocative actions and rhetoric and preserve unchanged the historic status quo on the Haram al-Sharif/Temple Mount.”

The “historic status quo” means that the Jordanian Waqf, which has administered the site since 1967, oversees the traditional ban on Jewish prayer.  However, visitation by Jews and Christians is officially allowed, even though rioters and paid harassment groups make such visits humiliating and dangerous.

“The status quo is upset constantly by agitators and rioters who barricade themselves on the Temple Mount and harass worshippers or, more precisely, the Jewish visitors,” Netanyahu said.  “This is also unacceptable to us.  We are dealing with this in cooperation and dialogue with Jordan, and not just with them.”

On Tuesday, as police escorted Jewish visitors through the Mount complex, another riot erupted with Muslim anarchists throwing firebombs, rocks, iron bars and firecrackers at the pilgrims.  The rioters sought to barricade themselves in the mosque as they have done many times before, but police followed them in, throwing tear gas and stun grenades.

Over the three days on the Mount, news reports cited 26 Palestinian protesters were arrested.  As well, 14 Israeli police and 36 Palestinians were injured.  (IJN)

“We are facing a changing world and extremist Islam is shaking old conventions. The ground around us is burning and we are experiencing historic shocks,” Netanyahu stated in a meeting Thursday.  (Facebook)

While skirmishes connected to the Temple Mount and other attacks have been occurring for months, even years, this week proved an escalation when, before Rosh HaShanah, police found not only piles of rocks to attack Jewish pilgrims but also a number of pipe bombs.

Public Security Minister Gilad Erdan said finding the pipe bombs “forces us to reconsider the arrangements for the Temple Mount.”

“It is unacceptable that Muslim rioters who barricaded themselves during the night on the Temple Mount can, at will, turn this holy site into a battlefield, including throwing stones, shooting firecrackers directly at security forces, and even bringing explosive devices into the area of the Mount,” he said. 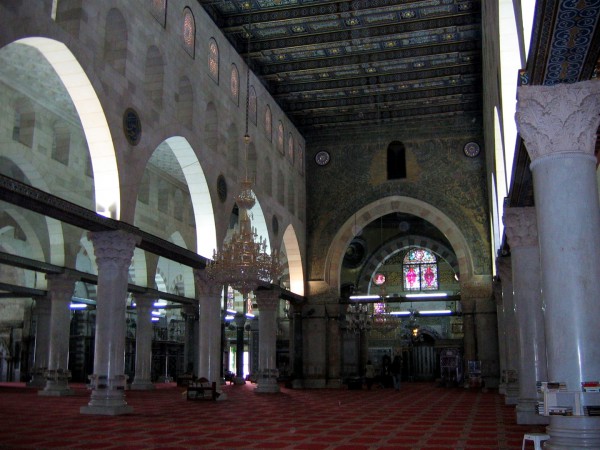 Israeli police were forced to secure the Temple Mount after Muslim rioters barricaded themselves inside the al Aqsa mosque with pipe bombs, rocks and fireworks.  (Photo by Eric Stolz)

Even with all of this incitement, the police reactions during the week brought condemnation from Jordan (which administers the site), Egypt, Saudi Arabia, Turkey, the Palestinian Authority and other regional leaders.

The Palestinian Authority Ministry of Information also accused Israel of incitement against Arabs living in Jerusalem, of terrorism and of declaring war “on the Palestinians and their holy sites.”  (Jerusalem Post)

Saudi Arabia’s King Salman bin Abd alAziz Al-Saud during the week phoned a number of world leaders, including United States President Barack Obama, asking them to stop “the Israeli attacks, including intervening with the U.N. Security Council to protect the Palestinian people.”  (Times of Israel)

According to the Saudi Press Agency, Salman’s appeal to Obama stated, “The Israeli attacks contribute to feeding extremism and violence in the world.”

“Any more provocations in Jerusalem will affect the relationship between Jordan and Israel, and Jordan will have no choice but to take action, unfortunately,” Salman said Monday. 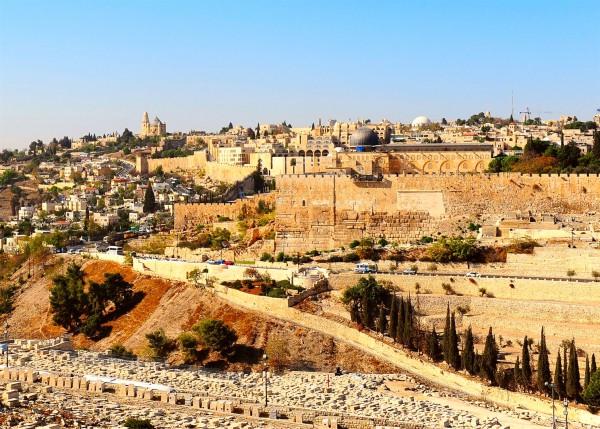 Netanyahu’s warnings of increased repercussions to criminals did not slow the violence.

On Thursday, a bus operated by Egged was targeted by stone-throwers in Jerusalem’s Ras el-Amoud neighborhood, causing the Arab driver to flee and contact the police.  The security entourage that arrived on scene found the bus also had been set on fire.

On the same day, another bus driver was injured near the Hitzma settlement in a rock attack that smashed his windshield.  A guard tower in Jerusalem’s Ofrit IDF base also was set on fire with Molotov cocktails.  (JPost; Ynet)

In the midst of the violence, a 20-person Likud Youth delegation toured the Temple Mount, despite a call from top government officials who said the visit would bring more harm than good.

“Because of the events that were on Rosh HaShanah, we wanted to strengthen our sovereignty at our holiest site,” said one Likud Youth leader, Dor Harlap, to The Jerusalem Post.  “We didn’t come to cause provocations or make a mess; … we came to show our presence.”

About 20 Muslim Waqf officials surrounded the youth group as female Muslims yelled at them.  The group continued to walk the Mount while praying in their hearts, Harlap said.

Due to Friday’s expected violence, Israeli security forces barred Muslims under the age of 40 from accessing the Mount.