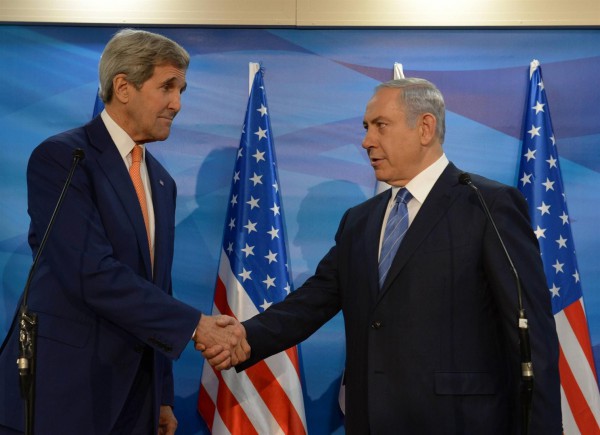 US Secretary of State John Kerry and Israel Prime Minister Benjamin Netanyahu greet one another in Jerusalem.

“As the mountains surround Jerusalem, so the LORD surrounds His people both now and forevermore.”  (Psalm 125:2)

On Wednesday, United States Secretary of State John Kerry released a statement saying that Israel and the Palestinian Authority (PA) have reached a “pivotal point.”  He had just returned from his first visit to Israel since the summer of 2014.

“As you know we’ve been very concerned about the violence and the potential for the situation to spin out of control,” Kerry said in a statement to reporters.  “Over these past months we have been encouraging all parties to take affirmative steps to reduce tensions and demonstrate a genuine commitment to a two-state solution.”

“I think we may be reaching a pivotal point now where both sides have important decisions to make for the future,” he continued, “and we obviously hope they make the choices that will advance the prospects for lasting peace.”

During a visit to Jerusalem and Ramallah on Tuesday, Kerry gave Israel words of support for their obligatory self-defense, and he gave PA Chair Mahmoud Abbas a message of sympathy sans accountability for the PA-backed spate of terrorism. 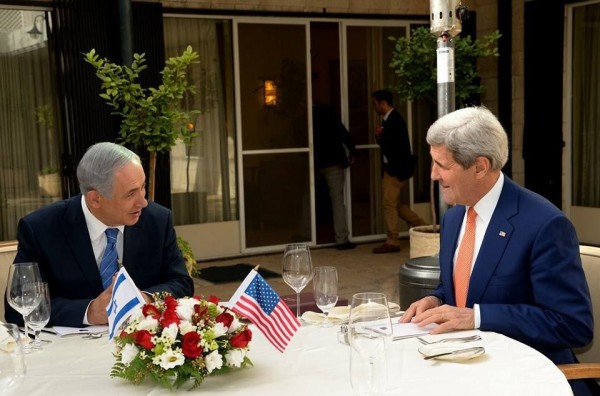 Prime Minister Netanyahu and US Secretary of State John Kerry having a meeting in Jerusalem.  (Photo by Haim Zach)

“Clearly, no people anywhere should live with daily violence, with attacks in the streets, with knives or scissors or cars.  And it is very clear to us that the terrorism, these acts of terrorism which have been taking place, deserve the condemnation that they are receiving.  And today I expressed my complete condemnation for any act of terror that takes innocent lives and disrupts the day-to-day life of a nation.

“Regrettably, several Americans have also been killed in the course of these past weeks, and just yesterday I talked to the family of Ezra Schwartz from Massachusetts, a young man who came here out of high school, ready to go to college, excited about his future.  And yesterday his family was sitting shiva, and I talked to them and heard their feelings, the feelings of any parent for the loss of a child.

“So I’m here today to talk with the Prime Minister about the ways that we can work together, all of us — the international community — to push back against terrorism, to push back against senseless violence and to find a way forward, to restore calm and to begin to provide the opportunities that most reasonable people in every part of the world are seeking for themselves and for their families.” 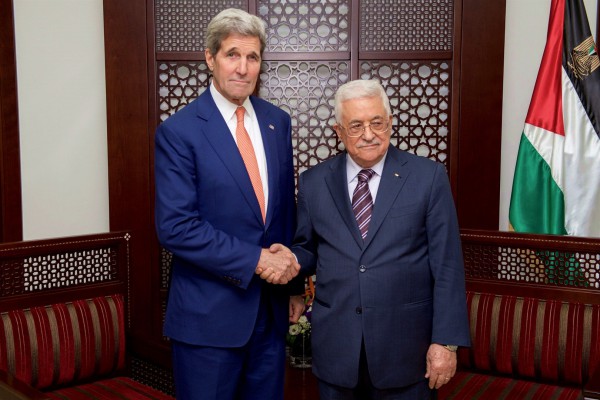 Later, Kerry met with Abbas in Ramallah, despite opposition from Palestinian groups including Hamas, Islamic Jihad and the Popular Front for the Liberation of Palestine, who said Kerry’s description of Palestinian attacks as “acts of terrorism” was “offensive to the blood of martyrs and a provocation against the feelings of our people.”

They also said Kerry’s main goal in visiting was to “thwart the intifada.”

Although the State Department did not post a transcript of the meeting, Kerry did confirm the Obama administration’s commitment to a two-state solution, saying, “I want to make it very, very clear tonight that I am here at the request of President Obama to see what we can do to try to help contribute to calm and to restore people’s confidence in the ability of a two-state solution to still be viable, to be achieved at some point.  We are committed to that, two states with two peoples living side by side in peace and security, and President Obama and the United States will continue to work as hard as possible to achieve that end.”

Meanwhile, a recent public opinion poll conducted by the Watan Center for Studies and Research found that 48% of the Palestinians interviewed believe that the real goal of the “intifada” is the destruction of Israel, and the creation of a single Palestinian state.

Only 11% of those interviewed believed the true goal of the current intifada is to free the land Jordan held before the 1967 Six Day War. 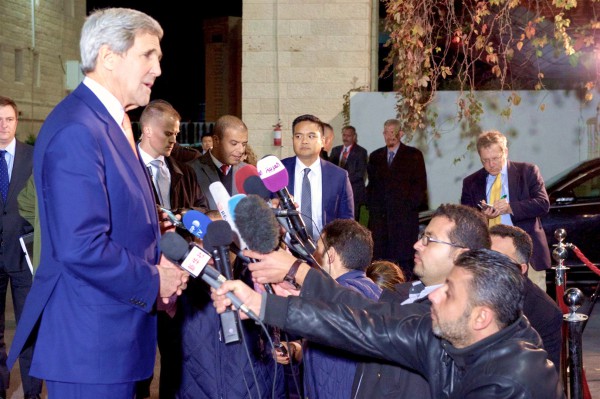 John Kerry speaks with the press in Ramallah.

Kerry issued a press release after his meeting with Abbas to say, “I know that the situation for Palestinians in the West Bank, in Jerusalem, in Gaza is, at this moment, very dire, that there are extraordinary concerns, obviously about the violence.”

Since the wave of terror hasn’t targeted Palestinians and Arabs, but Israelis and Jews, Kerry’s comments seem disconnected from the fact that it is the Israeli population that naturally has “extraordinary concerns about the violence.”

Netanyahu, who consistently states support for two states, told Kerry Tuesday that calm must be fully restored and Palestinian terrorism stopped before further steps can be taken to better the security and economic situation for residents of Judea-Samaria.

Kerry’s visit failed to achieve any progress in ending the terrorism, however, and Palestinians are apparently dismayed that Kerry did not obtain new concessions from Israel.