Palestinian Cartoons and Music Encourage the Murder of Jews 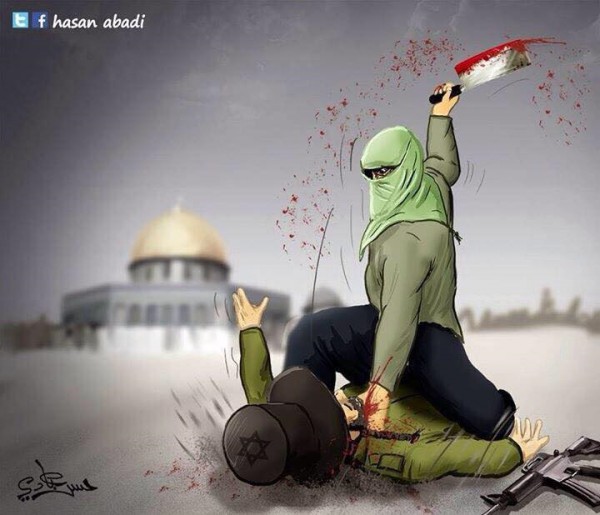 “God is our refuge and strength, an ever-present help in trouble.”  (Psalm 46:1)

The Palestinian Authority official newspaper, Al Hayat al Jadida, which is under control of so-called moderate Palestinian President Mahmud Abbas, glorifies violence by depicting in cartoons a message easily understood by even children: continue stoning and driving over Jewish  Israelis.

Of course, this message isn’t limited to the PA newspaper.  The use of anti-Semitic and anti-Israel cartoons in the Arab and Palestinian media is widespread and demonstrates no restraint. 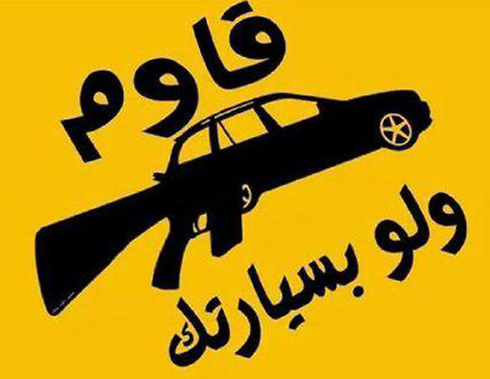 This Palestinian cartoon likens the car to a gun. The text reads, “Achieve the objective even with your car.”

The latest incitements to violence are in reaction to charges that the Jews are planning to destroy the al-Aqsa Temple Mount mosque and an outcry against the presence of Jews on the Temple Mount.

For example, last week’s grisly terrorist attack in a Jerusalem synagogue where Jews were reciting morning prayer was celebrated in the Hamas-affiliated social media with cartoons.  The cartoons depicted the attack as being a response to Jewish demands to worship on the Temple Mount and, thus, as a defense of a presumed threat to the al-Aqsa Mosque.

Hours after the massacre of Jewish men who were worshiping in their Jerusalem synagogue, Palestinian social media spread this vile cartoon glorifying the slaughter.

In the following typical cartoon, a father is seen before the Dome of the Rock on the Temple Mount sitting by an Israeli police barrier.

The father is handing his son a slingshot and instructing him to use it, saying, “Purification before prayer is performed with stones.” 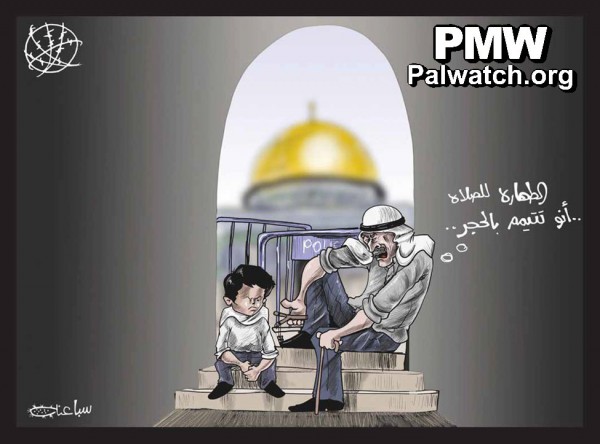 A Palestinian father on the Temple Mount tells his son to stone Jews, connecting it to devotion to God.

Another depicts a man standing atop the Dome shooting a slingshot while giving blood to the Dome through an infusion line.

While slinging stones may seem rather tame in comparison to the use of actual weapons or even Molotov Cocktails, they can be lethal.  In September of 2011 Asher Palmer and his infant son were killed when stones were thrown at their car.

Such cartoons, which appear in Arabic, are not in conflict with Abbas’ true goals and values; for example, in a cartoon published on November 6 on an official Fatah Facebook page, Abbas’s Fatah party used the word “da’es,” which means “run over,” to encourage street violence.  The word “da’es” is smaller to “da’esh,” or Islamic State.  In the cartoon, the Aqsa Mosque appears in the background and underneath are printed the words, “Hit the gas at 199 [km/h] for al Aqsa.”  (JPost)

Many cartoons, such as the one below, depict Jews fleeing from or murdered by terrorists in cars. 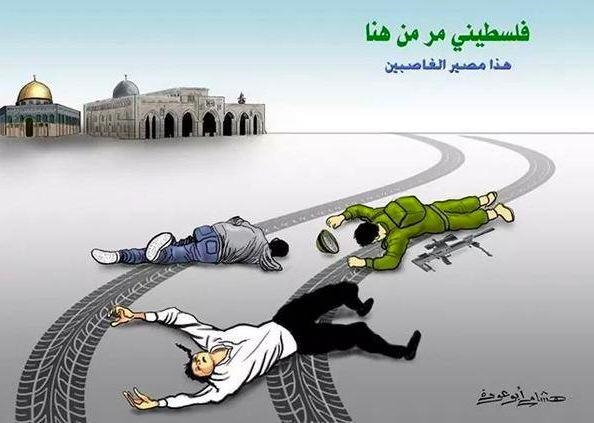 A Palestinian political cartoon encourages Palestinians to carry out attacks on Israelis by running them over with cars.

This is a clear incitement to terror. Sadly, it has in fact “succeeded.” On November 10, a Palestinian terrorist tried to run over Israeli Dalia Lemkus. Because he was unsuccessful at killing her with his car, he got out and stabbed her repeatedly.

Sadly, incitement to violence is nothing new for Palestinian President Abbas.

For years, Abbas has shown one face to the Western media and quite another to the Palestinian people and Muslim world.  While his statements in the Western press indicate support for a two-state solution, in Arabic he continues to encourage Palestinians to use any means including violence and terror to remove the Jewish “entity.”

Of course, Hamas is no stranger to such incitement, either.  Recently it produced an animated music video that warns, “Zionist run away, run away Zionist.  You are about to be killed by a car.”

“Zionist, you and not another
Look right, look left, be careful
A car emerges from all sides
Picks you up to your grave
An angry car is coming toward you
Run for your life
You chose [this] so bear responsibility
Run away because you are about to die”  (Arutz Sheva)

Another song exhorts, “Run over, run over the 2-month-old baby girl—that’s how we get back at them,” reported Israel’s Channel 2 News in July.

Just a few months later, a terrorist rammed his car into the stroller of 3-month-old Chaya Zissel Braun and a crowd of people at a train stop, killing her and a 22-year old woman from Ecuador.