“The LORD will protect him and preserve his life; He will bless him in the land and not surrender him to the desire of his foes.  The LORD will sustain him on his sickbed and restore him from his bed of illness.”  (Psalm 41:2–3)

The wave of terror continues in Israel as Palestinian incitement feeds more violence against Jewish Israelis.

A toddler remains in serious condition after his leg was nearly severed in a car ramming attack Monday in Jerusalem.  The family has requested that people around the world pray for Yotam Shmuel ben Yael’s complete healing as the hospital works to save the child’s foot.

Yotam was one of 14 injured when 21-year-old Abed Almohsin Hassone from Beit Hanina rammed his car into a bus stop in Jerusalem.

In response to the attack, Israeli Prime Minister Benjamin Netanyahu said, “I would like to send wishes of recovery to all of the wounded.  I would like to praise the actions, in recent months, of civilians and police, of soldiers and members of the security forces.  Their quick and resolute action, time after time, saves lives and prevents much heavier disasters.”

“We are facing a new kind of terror, a terror of lone perpetrators,” Netanyahu said.  “It challenges not only us, but also other countries in the world, and we are constantly taking action to fight this terror.  I have no doubt that in the end, we will defeat it.”

Palestinian incitement begins early.  A recent shipment discovered in the Haifa port where Israeli authorities seized about 4,000 plush dolls illustrates that reality.  The dolls, which were dressed in Palestinian garb and held rocks in an upraised fist, arrived from the United Arab Emirates (UAE). 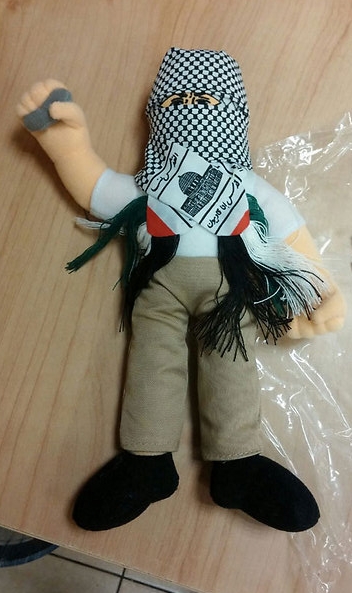 Haifa customs officials intercepted a shipment of 4,000 dolls wearing a keffiyah and holding a stone.  The shipment was on its way to the Palestinian Authority.  (Photo by Haifa customs)

The UAE container of rock-throwing dolls was destined for the Palestinian Authority (PA) and labeled as “containing clothing and rugs.”  But the dolls had “one clear intention: to poison the minds of innocent young children,” said Israel’s Deputy Foreign Minister Tzipi Hotovely in a statement.

The dolls were intended for an incitement campaign against Israel among three- to eight-year-old Palestinian children, an age group “very much influenced by their toys,” according to an advisor to the Israeli Knesset’s education committee, Shelley Elkayam.  (Daily Mail)

“Toys that show the throwing of stones at other people make this activity seem normal; they make an aggressive violent behavior normal,” added Elkayam.  (MailOnline)

The faces of each stuffed doll are masked with the black-and-white checkered scarves (keffiyehs), a sign of the Palestinian cause, while their necks are draped with banners saying, “Jerusalem we are coming” and “Jerusalem is ours.”

“The customs authority continues its daily work in preventing smuggling, with a focus on smuggling weapons and preventing the infiltration of inciting material, especially at this time,” said Kobi Yahav, the director of customs at Haifa.  (JSpace)

“The Palestinians continue to indoctrinate their children, continue to educate them in hatred and violence, using all possible means, including, as in this case, children’s dolls,” Hotovely added.  (JSpace)

Meanwhile, the seizure was misreported in the Palestinian press.

PA daily news al-Hayat al-Jadida reported that Israel had confiscated the children’s toys merely for wearing headscarves, with no mention that they held rocks in upraised fists. 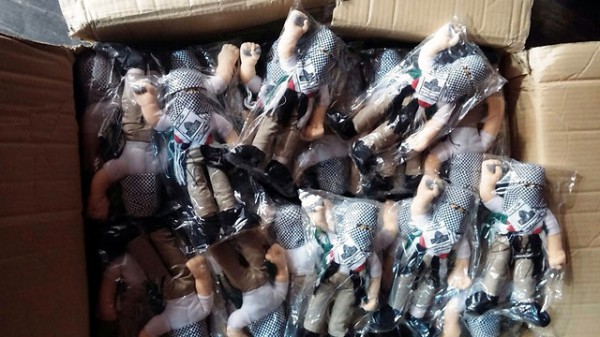 One of many boxes of dolls designed to incite Palestinian children to violence against Israel. (Photo by Haifa customs)

It is not only children’s toys that have become a target market for terrorism in the PA; in Gaza, perfume is being sold in a dagger-shaped bottle.

The dagger, which has become the symbol of Palestinian resistance, has become a commercial tool to build more business.

“The fragrance is dedicated to martyrs,” a Gazan vendor said.  It is intended to help remember the “value of revenge and continued fighting.”  (JPost) 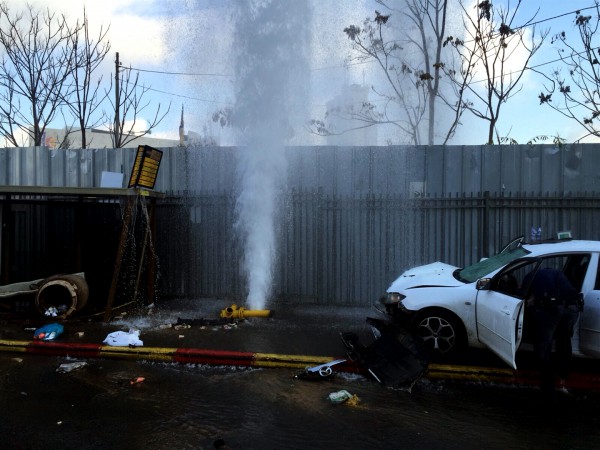 Destruction of property left in the wake of a car ramming by Abed Almohsin Hassone.  Police found an axe in the car, an indication that the terrorist intended to further injure his victims.

As of December 14, Israelis have been targeted by Palestinians in 91 stabbings, 34 shootings and 17 car rammings, according to the Israel Ministry of Foreign Affairs.  In all, 22 victims have been killed and 229 wounded.  Between September 13 and November 30, Israelis have also been the targets of 651 firebomb attacks.

In a 2001 rock-throwing attack, Palestinians crushed the infant Shoham’s skull, which resulted in his death six days later.  Biton was pronounced clinically dead after a March 2013 rock attack, before Muslim Arab paramedic Muawiya Qabha revived her; however, she never recovered from her injuries and died from them early this year.