“Pray for the peace of Jerusalem: ‘May those who love you be secure.  May there be peace within your walls and security within your citadels.’”  (Psalm 122:6–7)

On Friday in Paris, France convened a meeting with top diplomats from 26 nations to try to resolve the stall in Israeli-Palestinian peace talks by developing a strategy of economic and security incentives.  The Palestinians and the Israelis were intentionally excluded from this so-called International peace conference.

Since peace talks collapsed in April 2014, the international community fears that a two-state solution of both an independent Palestinian and Jewish state is becoming unworkable.  (WSJ)

“The possibility of two states, Israeli and Palestinian, living side-by-side, in peace and security, grows more distant by the day,” said French Foreign Minister Jean-Marc Ayrault after the meeting.

“Without a regional and international framework, the parties will not come to the table themselves,” said European Union Foreign Minister Federica Mogherini at a press conference at the June 3 summit.  “It is about creating the space and the possibility for the parties to re-engage seriously and revert the current trends.”  (Haaretz)

Mogherini added, “This is an opportunity to deal with two issues at once — with the Israeli-Palestinian conflict and the conflict between Israel and the Arab world.

The 29 participants of the Paris peace conference pose for the camera.

French President Francois Hollande, who opened the discussions, acknowledged that “only the sides themselves can take the brave step toward peace.  We can’t do it for them, but only assist them and provide them with guarantees.”  (Jerusalem Online)

Indeed, a joint communiqué of the proceedings stated that “a negotiated two-state solution is the only way to achieve an enduring peace, with two states, Israel and Palestine, living side by side in peace and security.  They [the participating nations] are alarmed that actions on the ground, in particular, continued acts of violence and ongoing settlement activity, are dangerously imperiling the prospects for a two-state solution.”

Bias against Israel settlements was compounded with statements casting Israel as the occupier. 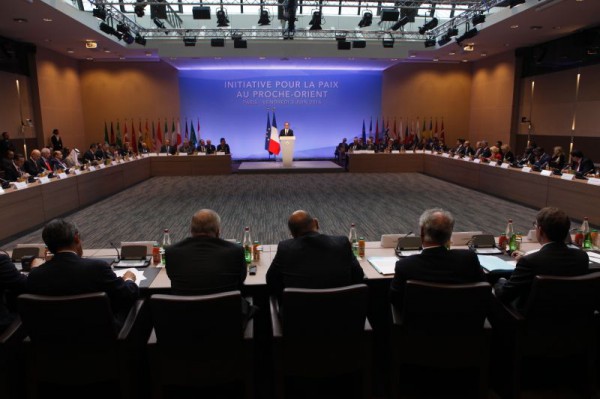 The statement also said that the participating nations desire “to rebuild trust and create the conditions for fully ending the Israeli occupation that began in 1967 and resolving all permanent status issues through direct negotiations based on resolutions 242 (1967) [and] 338 (1973), and also recalling relevant United Nations Security Council resolutions and highlighting the importance of the implementation of the Arab Peace Initiative.”

The summit participants have agreed to hold an international peace conference by the end of the year, where the package of financial incentives and security guarantees will be presented to the Israelis and Palestinians.

At a press conference last Wednesday, Netanyahu emphasized that peace comes only through direct negotiation.

“The path to peace does not pass through international committees that are trying to coerce an agreement, radicalize Palestinian demands and in doing so, distance peace,” he said.  (Israel Hayom)

“If the countries gathering this week in Paris really want to advance peace, they must join my call to [Palestinian Authority President Mahmoud Abbas] to enter into direct negotiations,” he said.  “The path to peace passes through direct negotiations between the two sides, without preconditions.”

“That is how it was in the past when we made peace with Egypt and with Jordan, and that is how it must be with the Palestinians,” he added.   “We will not stop looking for paths to peace.”