“Follow justice and justice alone, so that you may live and possess the land the Lord your God is giving you.”  (Deuteronomy 16:20)

Argentine Jews, which now number 200,000, have lost 100,000 in just one generation due to rapid assimilation: mixed marriages, rejection of the Jewish religion, and even rejection of the State of Israel.  Others have chosen to leave Argentina, emigrating to Israel and other nations.  (Jewish Agency)

Jewish leaders in Argentina are asking Israeli Prime Minister Benjamin Netanyahu for help with the assimilation phenomenon, calling it “quiet terrorism” not only in Argentina but also around the globe.

“This painful situation will lead to future generations, millions of Jews, who will be oblivious to their Jewish identity, and have no affiliation with the State of Israel,” Argentine Sephardic Rabbi Isaac Saka told Netanyahu.

“Millions of others might know they are Jewish, but they will lack any understanding of their heritage,” said Saka, who asked Netanyahu to catalyze a global summit on this “urgent, important and dramatic” issue and to discuss the “implications on the Jewish people’s future.” 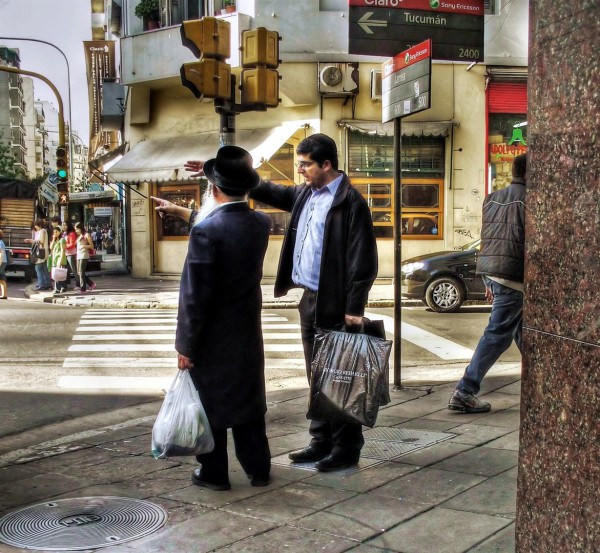 An Orthodox Jewish man asks for directions from a Jewish elder in Buenos Aires. (Photo by Jose Maria Perez Nunez)

Another form of terrorism in Argentina has not been so quiet. The recent Day of Remembrance for Truth and Justice in Argentina on March 24 honored the memory of Argentina’s Movimiento Judío por los Derechos Humanos (Jewish Movement for Human Rights, or MJDH), which worked to bring truth and justice to the nation after a vicious March 1976 military coup destabilized it.

In mid-1983, the MJDH “tied the defeat of anti-Semitism to the protection of human rights across all sectors of Argentine society,” writes Paul Katz of Columbia University.  “The MJDH’s first public activity [was] to participate in an August 1983 march against the military’s attempt to bestow amnesty upon itself for its many crimes.”  (Duke)

Also working to defeat terrorism in Argentina is its president, Mauricio Macri, who addressed the opening gala of the Plenary Assembly of the World Jewish Congress (WJC), which was held mid-March for the first time in Latin America.

Macri assured the audience that Argentina would make headway in solving the 1992 Israeli embassy bombing in Buenos Aires, which killed 29 people, and the suicide bombing that targeted the AMIA Jewish center in Buenos Aires in 1994, killing 85 people and wounding hundreds of others.  (Times of Israel) 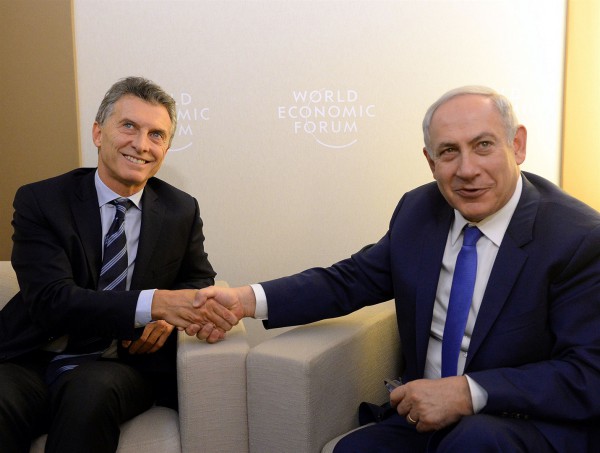 President Mauricio Macri meets with Prime Minister of Israel, Benjamin Netanyahu.  (Photo by Casa Rosada, the executive mansion and office of the President of Argentina)

WJC head Ronald S. Lauder spoke before last week’s Special Plenary Assembly, which was held on the anniversary of the 1992 bombing, saying, “These are not just attacks on Jews, but attacks on Argentina.”

“President Macri, you have promised that after all this time, Argentina will bring the perpetrators of these crimes to justice,” Lauder said.  “We believe you.  We trust you.  And the World Jewish Congress stands with you to help in any way that we can.”

Macri assured the Assembly that “Argentina is back in the world and stands ready to join in all battles for human rights, and against terrorism.”

Macri reminded the audience that his government, during its first week in power in December, had voided an agreement with Iran to jointly investigate the AMIA bombing.  It is suspected that Iran was involved in the attack.

Netanyahu issued the new president an invitation to visit Israel.  Macri has been to Israel previously, including as mayor of Buenos Aires in June 2014.

Regarding this visit, Macri told journalists, “Israeli suffering has to be understood. From afar, it is easy to give advice, but you have to be in Israel to really understand the situation.”