“And Dan, why did he linger by the ships?  Asher remained on the coast and stayed in his coves.”  (Judges 5:17)

A 3,400-year-old Canaanite fortress has been discovered in the northern-most coastal city in Israel, Nahariya, on land allocated for an apartment high-rise.  The architects and archaeologists are now working together to integrate the past with our future.

The result:  the Bronze Age citadel will be incorporated into the beachside apartment building’s design.

“Given the extraordinary nature and quality of the finds, the Israel Antiquities Authority (IAA) sought a solution that would allow the conservation of some of the remains for the benefit of the public, the IAA said in a statement.

While the Kochav Company, Ltd. had planned for an underground parking lot, an agreement with the IAA will instead ensure the citadel’s preservation as part of the structure. 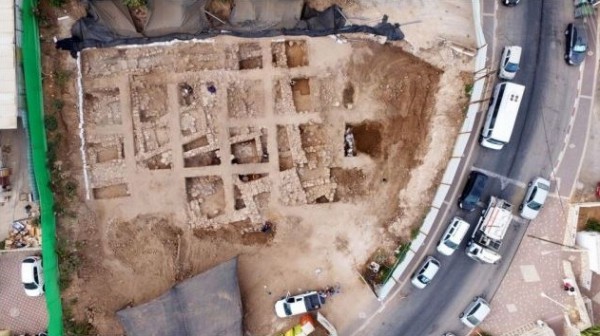 Architect Alex Shpol, regional-committee planner for the Ministry of the Interior, drew up new plans to incorporate the citadel and antiquities into the building for the benefit of the public.  (Ancient Origins)

Nimrod Getzov, Yair Amitzur and Dr. Ron Be’eri conducted the lengthy excavation, bringing in local students and youth groups to help uncover the walls and other remains of the fortress.

In the process, the teams discovered a stamped jar handle dated to the Middle Bronze Age, female figurines dated to the Late Bronze Age and a bronze arrowhead.  They also discovered pottery fragments dated to about 1300 BC that originated in Greece and Cyprus.  (Israel National News)

“Numerous artifacts were discovered in its rooms, including ceramic figurines in form of humans and animals, bronze weapons and imported pottery vessels that attest to the extensive commercial and cultural relations that existed at that time with Cyprus and the rest of the lands in the Mediterranean basin,” said a statement by Getzov, Amitzur and Be’eri.

“There was probably a dock alongside the citadel,” the excavators said on the fortress’ location.  “It seems that the citadel which we uncovered was used as an administrative center that served the mariners who sailed along the Mediterranean coast 3,400 years ago.”

The fortress had been burned down and rebuilt at least four times, the team said. 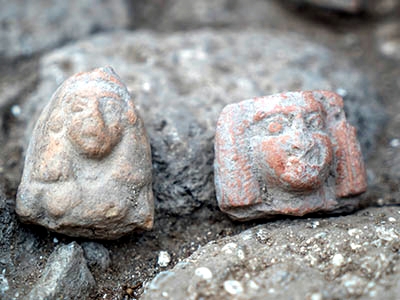 These Late Bronze Age female figurines were found amid the remains of the fortress.  (Israel Antiquities Authority photo by Eran Gilvarg)

The State of Israel shows such deep respect for its cultural heritage that in the process of launching construction projects throughout the country, archaeologists are employed to search for and salvage remnants of the past. Sometimes, building plans have to be put on hold.

For instance, construction was midway on a set of new housing units in Jerusalem before stalling at the discovery of an ancient graveyard.

After dozens of tombs were found during construction in the Gilo neighborhood of East Jerusalem, MK Aryeh Deri (Shas party leader and Minister of the Development of the Negev and Galilee) submitted a request to Israeli Prime Minister Benjamin Netanyahu to halt the building until a solution is found to preserve the graves according to Halakhah (Jewish law).

“We cannot agree to the possibility that the dead will be desecrated, heaven forbid, which is a serious sin,” Deri said.  “Today there are plenty of solutions for cases like these.”  (Israel HaYom)

“Then I heard a voice from heaven say, ‘Write this: Blessed are the dead who die in the Lord from now on.’ ‘Yes,’ says the Spirit, ‘they will rest from their labor, for their deeds will follow them.’”  (Revelation 14:13)