In European capitals it is becoming impossible for Jews to visit synagogues or other Jewish institutions without risking assault or death.

Anti-Semitic violence has skyrocketed with 40% increase worldwide, reports a study conducted by Tel Aviv University’s Kantor Center for the Study of Contemporary European Jewry, and prepared with the European Jewish Congress (EJC).  (JPost)

In 2014, Kantor registered “766 violent antisemitic acts perpetrated with or without weapons and by arson, vandalism or direct threats against Jewish persons or institutions such as synagogues, community centers, schools, cemeteries and monuments as well as private property,” the report states.  This number surged from 554 the previous year.

Specifically, the report lists 114 attacks on synagogues, 57 on Jewish community centers and schools, 118 on Jewish cemeteries and monuments, and 171 attacks of personal property. 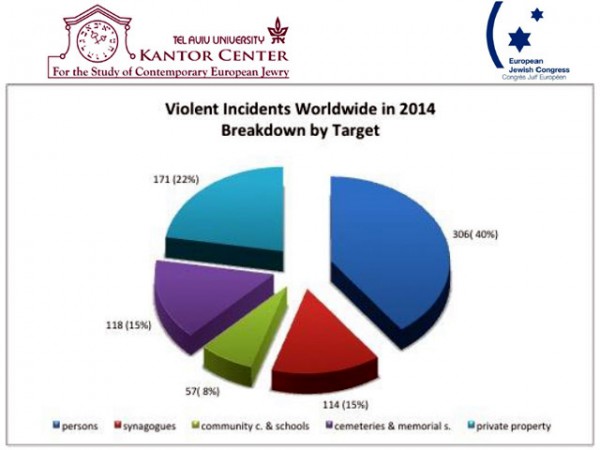 Armed incidents of violence include the shooting attacks against Brussels’ Jewish Museum, a Copenhagen Synagogue, and Paris’ Hyper Cacher supermarket.

“Many streets in our European cities have become hunting grounds for Jews, and some Jews are now forced to avoid community institutions and synagogues as a result,” EJC President Dr. Moshe Kantor said.

“Some are choosing to leave the continent, many are afraid to walk the streets, and even more are retreating behind high walls and barbed wire.  This has become the new reality of Jewish life in Europe,” Kantor said.

The Center reports the views described by European Jews as reflecting those of people “living in an intensifying anti-Jewish environment that has become not only insulting and threatening on a daily basis, but outright dangerous.”

According to the report, all taboos and restrictions against anti-Semitism have been removed.

Because of the rise in anti-Semitic violence, Israel is encouraging Europe’s Jews to make Aliyah and come home. 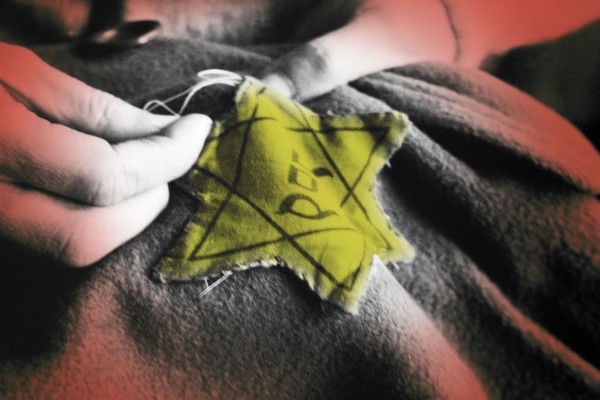 Old photograph of sewing on a Jewish Star at Auschwitz Concentration Camp, where up to three million people were murdered by the Nazi.  As taboos against anti-Semitism fall away, the possibility of another Holocaust rise.

The report describes hundreds of protests carried out against Israel and her supporters in western and central Europe during 2014 along with protesters chanting anti-Semitic slogans, looting Jewish shops, and attacking synagogues. Most of these events were linked to the Gaza conflict last summer.

Signs at protests equated Israel with the Nazis and blamed Israeli soldiers for every wrong imaginable.  Yet, we saw this blaming trend even prior to the Gaza conflict.

Although anti-Semitism was already on the rise in 2014, Operation Protective Edge in Gaza over the summer inspired a noted increase in anti-Semitism.

The report also describes a “general climate of hatred and violence” that is a result of the rise of the Islamic State (ISIS) in the Middle East.  (YNet)