Israel Stands With France Against IS Terrorism 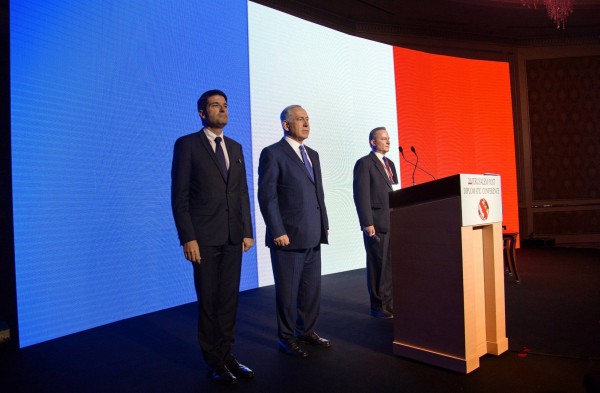 “Shall I acquit someone with dishonest scales, with a bag of false weights?”  (Micah 6:11)

Israel extended sympathy to Paris in the wake of attacks — the worst since WWII — and rallied behind Paris after the devastating multiple-terror attack last Friday where Islamic State-linked assailants killed 130 people.

Jerusalem was so sympathetic that it dressed its Old City in the colors of the French flag and brought its own national flag to half-staff.

“On behalf of the people and Government of Israel, I extend our deepest sympathies to the people of France and to the families of those who were brutally murdered in Paris last night.  We also extend our wishes for a speedy recovery to the wounded,” Netanyahu stated last Saturday.  “Israel stands shoulder-to-shoulder with France in this common battle against militant Islamic terrorism.”

“I’ve instructed Israel’s security and intelligence forces to assist their French counterparts and their counterparts from other European countries in any way possible,” Prime Minister Benjamin Netanyahu said.  “Terrorism must always be condemned.  It must always be fought.  Innocent people in Paris, like those in London, Madrid, Mumbai, Buenos Aires and Jerusalem, are the victims of militant Islamic terrorism, not its cause.” 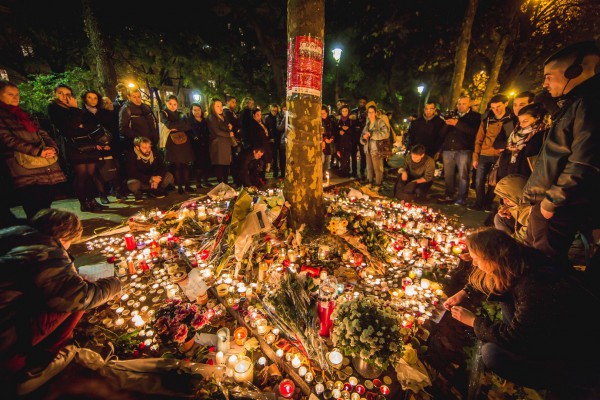 Parisians light candles and lay flowers near the Bataclan concert hall in memory of those who were slain in terrorist attacks on Friday, November 13, 2015.  (Photo by Eole Wind)

“The State of Israel stands shoulder to shoulder with France in the fight against terror,” Deputy Foreign Minister Tzipi Hotovely said Tuesday.  “The people of Israel in their entirety mourn with the people of France following the terror attack that transpired last Friday night.  The entire world is awakening to the reality of Islamic terrorism, which is motivated by an ideology that challenges the very foundations of the free world.”

Indeed, just a week after the attack in Paris, Islamic terrorists struck in Mali, raiding a hotel as people gathered for breakfast.  At least 22 people died, among whom was a 60-year-old Israeli identified as Samuel Benalal.

Of course, Israel itself continues to experience a wave of terror.  Between October 1, 2015 and November 19, 2015, terrorists have perpetrated 70 stabbings, 10 shootings, and 10 car rammings.

On Sunday, a Palestinian taxi driver tried to run down a group of Israeli pedestrians at Kfar Adumim junction (east of Jerusalem).  Upon failing to hit them, he got out of the car and attacked them with a knife.  One man was wounded, and the attacker was shot and killed.

On Saturday, in Kiryat Gat, four people were wounded in a stabbing attack.  One was a 13-year-old girl.  The stabber was captured several hours later.

Thursday was the bloodiest day with two people killed and one wounded in a stabbing attack during afternoon prayers in a Judaica store in Tel Aviv.  In Gush Etzion, three people were killed when a Palestinian terrorist opened fire with a submachine gun on cars in a traffic jam.  One fatality was 18-year-old Ezra Schwartz, an American participating in a nine-month volunteer program. 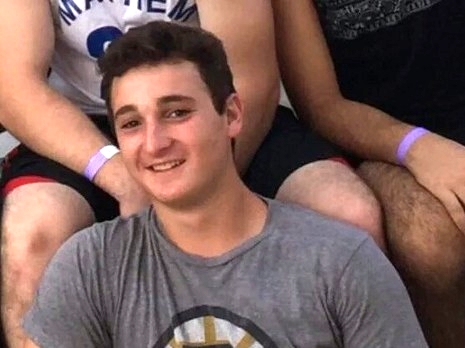 Hours before the Islamist attack in Paris, a Palestinian gunmen shot a car full of family members near Hebron, killing 40-year-old Ya’akov Litman and his 18-year-old son, Netanel.  Also in the car and lightly wounded were Litman’s wife, 16-year-old son and three daughters, 11, 9 and 5.

“In Israel, as in France, terrorism is terrorism and standing behind it is radical Islam and its desire to destroy its victims,” Netanyahu said on the Monday after the attacks.  “The time has come for countries to condemn terrorism against us to the same degree that they condemn terrorism everywhere else in the world.”

Meanwhile, Israel is not only being blamed for acts of terror against itself, it is being accused of Islamic-sourced terrorism, such as that which has been committed by the Islamic State—in Paris and elsewhere.

“Whoever fatuously attempts to create a link between radical Islamist attacks and the current problems between Israel and the Palestinians is fooling himself, his people and international public opinion,” said Israel’s foreign ministry following Wallström’s statement.

Many Palestinians celebrate acts of terror against Israelis, hailing them as heroes. While the Palestinian Authority has named streets, sports matches and stadiums after terrorists that have been killed as a result of their crimes, Chairman Mahmoud Abbas (of the Fatah party) claims “intolerable conditions” and blames Jewish settlers for “escalating violence.”

“We are not to blame, any more than the people of Paris are to blame,” Netanyahu said at the Jerusalem Post Diplomatic Conference on Wednesday, where he also said Palestinian rejection of Israel as a Jewish homeland “has become confused with militant Islam.”

Last Saturday, Abbas offered France a sympathy card: “We condemn the terrorist #ParisAttacks and we extend our sympathy and solidarity with the French people and government,” yet he has refused to condemn the Litmans’ murders that happened the same day.  (JP)

Meanwhile, the official Facebook page of Abbas’ party’s displays a cartoon showing Netanyahu helping a Muslim terrorist in Paris aim his gun.  An opinion article in the PA daily newspaper Al-Hayat Al-Jadida (The New Life) similarly claimed Israeli involvement in Paris as a result of European labeling of products created by Israelis and Jews.   (JTA)

“That is an absurdity that is comical if it were not so tragic,” Netanyahu said of Israel receiving blame for Islamic attacks on internationals.  Yet, to militant Islam, “we are not the cause, we are the obstacle,” he added.  (JPost)