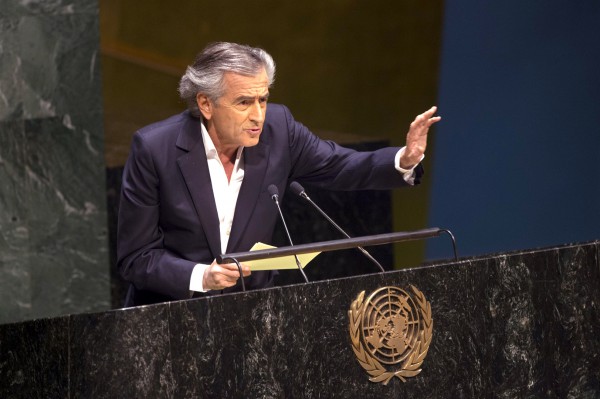 “By this I know that you delight in me: my enemy will not shout in triumph over me.  But you have upheld me because of my integrity, and set me in your presence forever.”   (Psalm 41:11–12)

On Thursday, in response to growing global anti-Semitism, the United Nations General Assembly (UNGA) held its first conference regarding the rising global tide of anti-Semitism.

“Today we are taking a historic step by holding the first-ever meeting in the General Assembly on tackling this long-standing and growing problem.  The United States is proud to have joined 36 other nations in calling for this meeting last October,” United States Permanent Representative to the United Nations, Ambassador Samantha Power said, emphasizing that two thirds of hate crimes in the US target Jews. 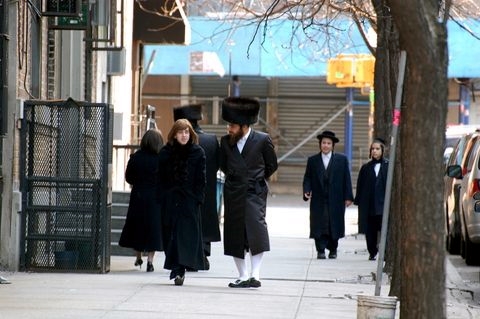 In a statement to the UNGA, United States President Barack Obama called the meeting an “important moment both in confronting this global challenge, and in our ongoing work to promote the universal rights and fundamental freedoms memorialized in the Universal Declaration of Human Rights.”

“Anti-Semitic attacks like the recent terrorist attack on a kosher supermarket in Paris pose a threat that extends beyond the Jewish community,” the White House statement said.  “They also threaten the values we hold dear—pluralism, diversity, and the freedoms of religion and expression.

For all these reasons, combating anti-Semitism is an essential responsibility for all of us.”

Included among the speakers was French philosopher Bernard-Henri Levy who gave the keynote address.

In it, traced the history of anti-Semitism back to its roots, including the blood libels against the Jews, and the claim of responsibility for the killing of the Messiah (Yeshua–Jesus).  He also spoke of the present attacks on Israel in the form of boycotts and how such vindictiveness can affect an entire society.  (JPost)

“In Paris, just a few days ago, we heard once again the infamous cry ‘Death to the Jews’ and cartoonists were killed because of cartooning, police for policing and Jews just for shopping and being Jews,” Levy said.

“A world without Jews indeed would not be a world,”  he emphasized.  “A world in which the Jews once again would become scapegoats for all people’s fears and frustrations would be a world in which free people could not breathe easy, and where the enslaved would be even more enslaved.” 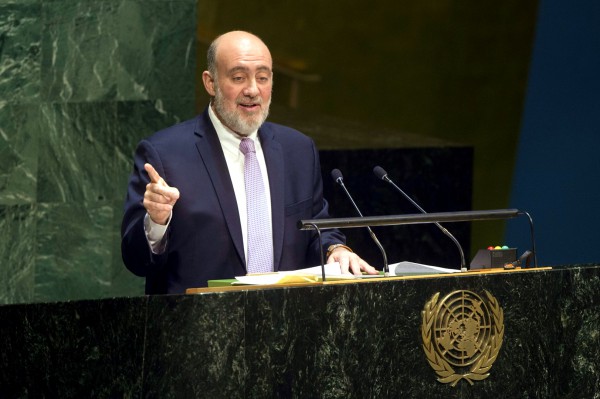 Ron Prosor, Permanent Representative of Israel to the United Nations, addresses the General Assembly meeting on concerns of a rise in anti-Semitic violence worldwide.

Relating to the Holocaust, Israel’s ambassador to the UN, Ron Prosor pointed out that the world had pledged “never again.”

“But here we are again,” he told the assembly.  “Seventy years after the Holocaust ended, European Jews are once again living in fear.”

“This summer, disguised as humanitarian concern, delegates have used this podium to commit anti-Semitism, accusing Israel of behaving like Nazis,” Prosor said.  “It doesn’t matter how much you’re angered or frustrated by our conflict.  There is no excuse for statements like that.”

In a video message, UN Secretary General Ban Ki-moon warned that anti-Semitism is an ancient hatred and that the conflict in the Middle East should not be used as a pretext for violence.

“Grievances about Israeli actions must never be used as an excuse to attack Jews.  In the same vein, criticism of Israeli actions should not be summarily dismissed as anti-Semitism.  This only suppresses dialogue and hinders the search for peace,” he said. 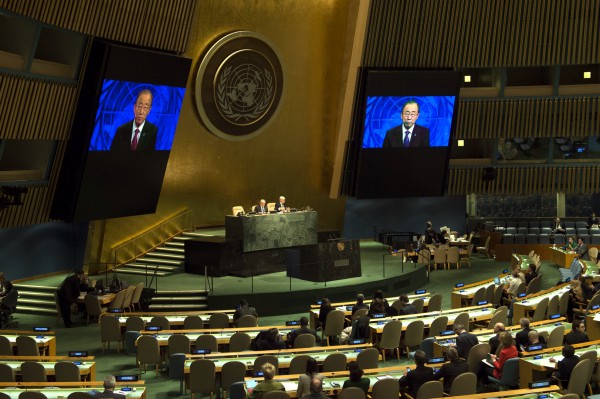 The meeting was attended by about half the 193 member states, making any form of resolution impossible.

However, in a joint statement following the event by 40 states (mostly Western), all of the member states were urged to “declare their categorical rejection of anti-Semitism,” to strengthen laws combating discrimination, and to prosecute those responsible for anti-Semitic crimes.  (Yahoo)

“The determination to eradicate the conditions that gave rise to the Holocaust was a guiding principle among the founders of this organization over six decades ago,” said the statement.  “Let us rededicate ourselves to that principle and endeavor to eliminate anti-Semitism in all forms.”

While no formal resolutions were adopted, the timing and substance of this first-ever UN event held great significance for those who vow to “never forget.” 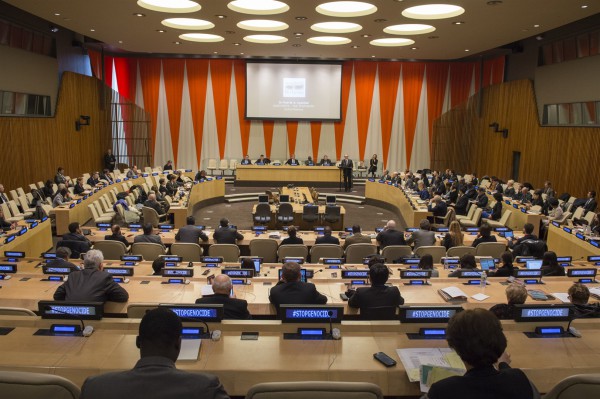 A wide view of the special event on the occasion of the seventieth anniversary of the liberation of the German Nazi extermination camp in Auschwitz-Birkenau, entitled, “Why Have We Failed at Preventing Genocides and How to Change That?”  The event was organized by the Permanent Mission of Poland to the United Nations.  (UN Photo / Eskinder Debebe)

That same week, on Wednesday, just a day before the UN meeting, the Polish mission to the UN marked the 70th anniversary of the liberation of the Nazi death camp Auschwitz with another meeting.  Attending were four out the five permanent members of the UN Security Council with only China missing.  (JPost)

At this meeting, Prosor began his remarks by referencing the recent attack on the Paris kosher supermarket and noting a similar “indifference for Jewish life” that existed 70 years ago.  (JPost)

He criticized UN members for not taking a hard line against anti-Semitism saying, “Europe is facing a new epidemic of anti-Semitism.”

“Nations have been reluctant to speak truthfully.

“From their ivory towers, they can’t see that extremists are using human rights to abuse human beings and using the media to abuse journalists,” Prosor said.

“Say it like it is,” he continued.  “Radical Islamists are the single greatest threat to global peace and security.  We all have a responsibility to fight for the values we all believe in.  We are not doing enough to stop extremists.  The dangers of indifference and consequences of inaction are just too high.”