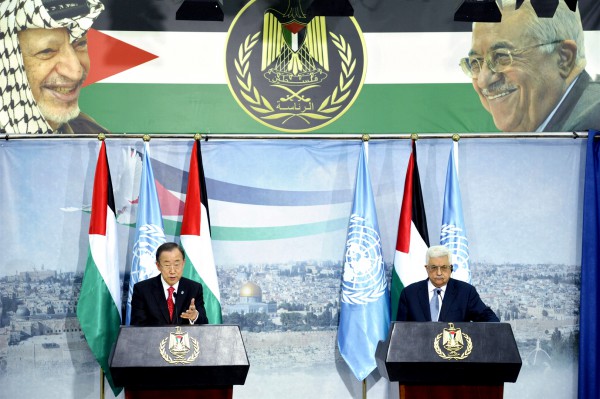 Secretary-General Ban Ki-moon (left) speaks at a joint press briefing with Mahmoud Abbas (right), President of the Palestinian Authority, in Ramallah in the West Bank on November 21, 2012, just over a week before the UN upgraded Palestine to non-member observer state status.

A scathing report published by the Arab Organization for Human Rights (AOHR) on Friday accused the Palestinian Authority (PA) of “inhumane practices and human rights violations” against Palestinian civilians.

The report listed torture, degrading treatment, harassment, and repeated or extended detention among the human rights violations.  The AOHR holds PA President Mahmoud Abbas responsible for all of these abuses.

“With regards to the effect of detention on the lives of the detainees, 60% of those in the study explained that they now suffer from chronic diseases due to torture and the poor conditions in which they were held in detention.

On another level, 60% confirmed that repeated or extensive detention reduced them to a state of acute poverty,” the report stated.  (JPost)

The human rights group, which is based in London, has called on the United Nations, the Arab League and the Organization of Islamic Cooperation to “put pressure on Mahmoud Abbas to stop political detention as it harms the interests of all Palestinians.”

Sadly, such oppressive behavior is not uncommon in the Middle East.  The PA, Hamas, and many Arab countries in the Middle East do not allow their citizens to enjoy a free, democratic society.  The State of Israel is the only democracy in the Middle East where the rights of civilians are safeguarded and such atrocities cannot take place.