“Also our enemies said, ‘Before they know it or see us, we will be right there among them and will kill them and put an end to the work.’”  (Nehemiah 4:11)

After losing his right leg in the blast of a suicide bomber at Zaventem Airport in Brussels on March 22, Jewish Belgian Walter Benjamin announced his intention to make aliyah after he has recovered enough from his wounds. Benjamin was on the way to the Holy Land to spend Purim with his daughter when the bombers struck the airport.

The blast, which the Islamic State (ISIS) has taken responsibility for, killed the person next to Benjamin and maimed him, while his suitcase took the brunt of the blast, he told Channel 2.  (Jerusalem Post)

“I thought I was going to die,” he said.

After living through the bombing, being in the homeland of the Jewish people, Israel — where Benjamin’s daughter lives and will soon enlist in the Israel Defense Forces — has become very important for him. 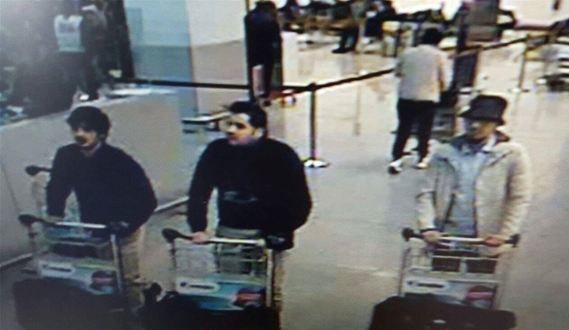 Still from CCTV footage showing the bombers Najim Laachraoui (left), Ibrahim El Bakraoui (center), and an unidentified man (right).  The bombers left and centre each have a gloved left hand, perhaps to hide the trigger.

The Brussels tragedy killed 32 people and injured about 340, including travelers embarking to Israel.

Two of the wounded were Hasidic Israeli brothers-in-law in Brussels for a family funeral.  The pair, one listed as moderately to seriously injured and the other as moderate, were flown to Israel Thursday night and hospitalized at the Hadassah Hospital in Jerusalem.

They will receive treatment in the intensive-care unit and the orthopedic wards, reports Israel National News.

Meanwhile, Benjamin said in his interview with Channel 2 that Belgium will not respond to the attacks in appropriate measure.

“Honestly, I don’t think anything will change.  There still is no security and the authorities don’t have a clue.  At least now after the attack you can understand how Israelis feel when there’s a terror attack,” he said.

But it seems that all Belgians do not understand.

A Muslim woman at a makeshift memorial in Brussels, decorated with numerous candles and international flags, set down a Palestinian Authority flag, then picked up an Israeli flag, ripped it to pieces and hid the remains beneath other flags.  (JP)

The incident was repeated by Muslims or Arabic-speakers two more times, all three occasions captured on video.  (JPost)

Last Sunday, however, locals paying their respects at a memorial were displeased when a white-haired man wearing a North African Muslim head covering shouted “Palestine” and called Israel a “terrorist state.”

The man stepped on other nations’ flags to reach the Israeli flag near the middle of the memorial, while local Flemish- and French-speakers booed and shouted “Shameful!”  When the man seized the Israeli flag, another man stepped in to rescue the flag from his grip.  The police soon arrived and escorted away the offender.

In another incident at a memorial, a French-speaker confronted two Arab men who placed a Palestinian flag over an Israeli flag at the memorial.  The French-speaker told them, “This is an apolitical place; don’t do this.”

Meanwhile, a call center operator at the Belgian Federal Emergency Hotline insisted that there is no such country as Israel.

She was responding to a volunteer for the Jewish Coordination Committee who called to arrange permits for wounded Jews to be transported to Israel for treatment.  (IDFSpokesperson)

The hotline responder tried to “correct” the volunteer twice, insisting that Israel was Palestine.  The transcript records: “They need to go to Palestine. … it was Palestine before, of course. … It’s Palestine,” said the operator.

When asked if he recognized Israel, the operator responded, “I only know that the Jews want to live there, that Palestine accepted them, and that there is a war between Israel and Palestine, of course.  And the occupation.  That’s what’s always on the news.”

The volunteer then asked, “Are you able to assist me with my request?”  The operator responded: “Yes, of course.  They are returning to Palestine and they asked if they can receive a permit.  Of course.  Here it is.”