“There he found a man named Aeneas, who was paralyzed and had been bedridden for eight years.  ‘Aeneas,’ Peter said to him, ‘Messiah Yeshua heals you.  Get up and roll up your mat.’  Immediately Aeneas got up.”  (Acts 9:33–34)

Israel is continuing to fulfill God’s prophetic promises that it would be a blessing to the world.  An Israeli marvel of technology and science is poised to change the lives of millions around the world who are confined to wheelchairs.

While not a supernatural miracle of healing, the ReWalk Personal Exoskeleton System does feel like a miracle for the many men and women paralyzed with lower limb disabilities who can now stand up and walk because of it.

The device was developed by Dr. Amit Goffer, an Israeli inventor who became quadriplegic after an ATV accident in 1997. 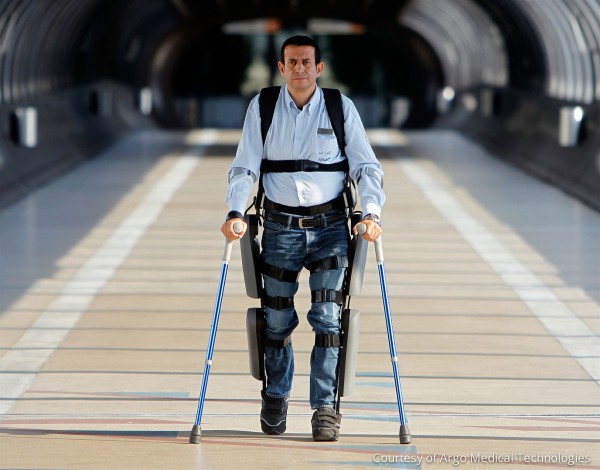 The ReWalk robotic exoskeleton is giving mobility to men and women paralyzed by lower limb disabilities.

ReWalk’s 44-lb contraption includes a wrist-mounted controller; a backpack with computer and lithium batteries; a fitted metal brace to secure some of the upper body and the legs; and motors triggered by forward leaning that direct the hips, knees and ankles.  (Medical Device and Diagnostic Industry Online)

The United States Food and Drug Administration approved the device for personal use on June 26, bringing this wearable, robotic exoskeleton to U.S. markets.

“This revolutionary product will have an immediate, life-changing impact on individuals with spinal cord injuries,” said Argo Medical Technologies CEO Larry Jasinski.  “This is truly the beginning of ‘ReWalking’ as a daily reality in the U.S.”  (Tech Cocktail)

ReWalk has already had an impact on U.S. military purple-heart recipients who returned home from war with heroic legacies—and the lifelong trial of lower-body paralysis.  These paraplegics, however, are not bound to a chair any longer.

Retired U.S. Army Sergeant Theresa Hannigan claimed the first ReWalk used in the States beyond the confines of U.S. hospitals or clinics, with the Department of Veterans Affairs committing to cover the $69,500 cost of the device.  (Engadget)

“There are so many things that I have missed by sitting in the wheelchair,” said Hannigan in a CBS News interview, who was knocked off her feet by an autoimmune disease.  “The biggest thing… would be giving me back my independence.”

Marine Corps Captain Derek Herrera, who was injured with a Taliban bullet two years ago in Afghanistan, will be one of the first Americans to own a ReWalk.

He said he saw in ReWalk “hope for the future.”

“Mentally and emotionally it’s been inspiring and incredible,” said Herrera who also has seen the financial support of the MARSOC Foundation, which specifically aids members of the Marine Corps Special Operations Command.  (Boston Globe)

“It will be incredible for me to regain independence, to use the system to walk and stand on my own,” he said.

The benefits of the ReWalk device go beyond standing and walking.  It also helps patients in the fight against heart disease, diabetes, and obesity, which result from a sedentary lifestyle, and will help prevent ulcers that come with continual sitting in a wheelchair.

“Strengthen your feeble arms and weak knees.  ‘Make level paths for your feet,’ so that the lame may not be disabled, but rather healed.”  (Hebrews 12:12–13)