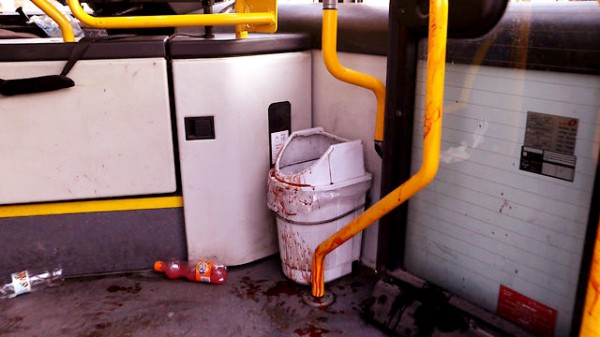 On the morning of January 21, a Palestinian man injured 12 Israelis in a terror attack on a Tel Aviv bus.  His assault follows a wave of violence against Israeli citizens in recent months.  (Photo credit: Yaron Brener)

“As for the cowardly, the faithless, the detestable, as for murderers, the sexually immoral, sorcerers, idolaters, and all liars, their portion will be in the lake that burns with fire and sulfur, which is the second death.”   (Revelation 21:8)

Israelis suffered yet another “lone wolf” terrorist attack on Wednesday when a 23-year-old Palestinian man stabbed 12 riders in a Tel Aviv bus.

Hamza Matrouk entered Israel from the Tulkarem refugee camp in Judea and Samaria (also known as the West Bank) and was captured after being shot in the leg by an off-duty prison guard.

“We were on an escort mission to [a nearby] courthouse and identified a large gathering of people crying out for help on Ma’ariv Bridge,” Benny Botroshveli of the Israel Prison Services’ Nachson Unit said.

“Me and my team of three others identified the terrorist and chased after him,” he said.  “The terrorist collapsed after we shot at his legs.  We then shackled him and awaited the arrival of police officers.”

Matrouk told Shin Bet (Israel’s internal security service) interrogators that his attack was in response to the recent Gaza war and unrest on the Temple Mount, which is a holy site for both Jews and Muslims.  He explained that he was motivated by radical Islamic television programs on how to reach Paradise.  (Times of Israel)

While the Palestinian ran amok on the bus, 62-year-old bus driver, Herzl Biton, who although critically wounded by a series of stab wounds to the abdomen, managed to hold the attacker off long enough for many of his passengers to leave the bus.

He also slammed on the breaks as Matrouk was on his way to the back of the crowded bus upsetting him and allowing others to escape.  He said he swerved the bus to attract the attention of others outside, but the attacker was not dissuaded.

“I had no choice but to bring him back over to me.  I slammed on the brakes and he flew towards me like a bird.  I then jumped out of the chair, grabbed his left hand and started to spray him with pepper spray,” explained Biton in an interview on Israeli TV last Saturday.  (Times of Israel)

Hearing of his father’s heroics, Biton’s son Yaniv commented, “It is something that identifies him, he always gives of himself for others and first of all takes care of them.”

Biton was in critical condition following the stabbing.  He underwent life-saving surgery at Ichilov Hospital in Tel Aviv, where he is currently recuperating.  (Times of Israel) 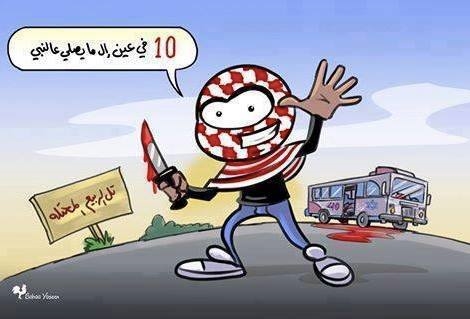 A Palestinian image showing a terrorist hailing the stabbing of a number of civilians. The sign reads, “The Occupied City of Tel Aviv.”

Liel Suissa, an 8th grader from Bat Yam, was on his way to his new high school when the attack occurred.

Describing the attack on Briton, he said the driver saved many of the passengers by opening the doors and holding the attacker.  With some quick thinking, Suissa used his elbow to break out the window in order to escape the bus.

“I was sitting on the bus and I heard people shouting.  The terrorist had suddenly gone to the driver and stabbed him.  He was shouting things, but I couldn’t hear clearly.  I saw him stab the driver, and I ran to the back with the others to get away from him.  He approached us, I broke the window and got out.”

Husam Badran, a Hamas official, praised the attack on Facebook calling it an “extraordinary” act of “resistance.”  (Times of Israel)

The attack was carried out just three weeks after the posting of an instructional stabbing video on social media.

Several colorful, inflammatory cartoons appeared in the Palestinian and Arab press only hours after the attack.  Many media called for more attacks as well and published images of bloodied knives appearing as the Palestinian flag.

The #JeSuisCouteau (I am a knife) hashtag trended  on Twitter in support of violence against Jews.  This drive is a direct assault on the #JeSuisCharlie (I am Charlie) campaign by millions of Parisians who marched against the Islamic hatred that murdered 12 at Paris’ Charlie Hebdo magazine on January 7.

The Palestinian Ma’an News Agency reported that the Popular Resistance Committees, an umbrella group of smaller armed factions, excused the attack calling it a “natural reaction to all Israeli crimes against Palestinians, their lands and religious sites.” 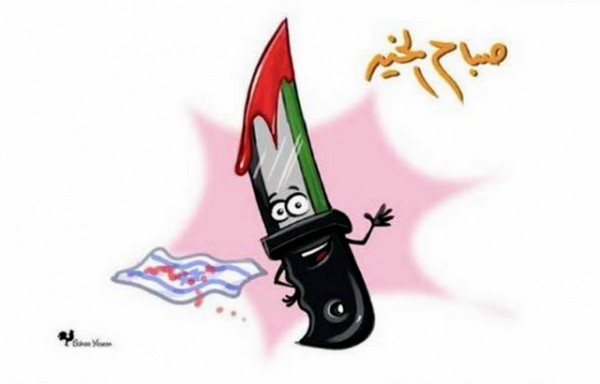 Palestinian political cartoon praising the actions of a lone wolf terrorist on a Tel Aviv bus.  This drawing depicting an Israeli flag covered in blood and a knife adorned with the colors of the Palestinian flag was circulated and shared on Facebook.  The image is titled “Good Morning.”

Explanation: The indoctrination of Palestinaian Martyrs being rewarded with 72 Virgins in Paradise

The most prominent reward that Palestinian Martyrs are repeatedly promised are the 72 Virgins in Paradise.  A Palestinian religious leader explained that this is authentic Islam, whose purpose is to “fill Muslims with desire for Paradise”:

“He [Muhammad] said (in a Hadith, Islamic tradition): ‘[There is] a palace of pearls in Paradise and in it seventy courts of ruby…  And in each court [there are] seventy houses of green emerald stone.  In every house, seventy beds.  On every bed, seventy mattresses of every color and on every mattress a woman.’  (Hadith)

The writing of the Prophet [Muhammad in this Hadith]… is intended to fill Muslims with desire for Paradise… to be worthy of it, because only three dwell there: Prophets, Righteous and Shahids (Martyrs for Allah).”  This was reported in Al-Hayat Al-Jadida, January 2, 2004.

Al-Hayat al-Jadida which in English means: “The New Life”, is an official daily newspaper of the Palestinian National Authority.

The Martyrdom message spans all parts of society, including the teachings of religious leaders, TV news reports, official schoolbooks, radio, and today it’s most fashionable in Palestinian music videos.

The Palestinian media regularly describes the death and funerals of terrorists as their “wedding.”

This indoctrination has impacted Palestinian society so deeply that mothers celebrate their sons’ death as “weddings” and many have been quoted saying that their sons’ motivation to fight against Israel was to be killed in order to reach Paradise and be married to the 72 Virgins.

Watch this Palestinian music video which is an example of the Palestinian Authority’s method of indoctrination to their population.  It is the longest running music video on Palestinian TV, which shows a male Martyr being greeted in Islam’s Paradise by women all dressed in white.  As a Palestinan Islamic leader wrote, its purpose is to “fill Muslims with desire for Paradise.”