“Their Redeemer is strong, the LORD of hosts is His name; He will vigorously plead their case so that He may bring rest to the earth, but turmoil to the inhabitants of Babylon.”  (Jeremiah 50:34)

The first report from the United Nations Board of Inquiry (BOI) regarding Operation Protective Edge and last summer’s fighting in the Gaza Strip found that Hamas terrorists exploited UN facilities in the Gaza Strip and used children as human shields.

“Moreover, Israel is prepared to extend its assistance to UNRWA [United Nations Relief and Works Agency], with the aim of preventing the recurrence of circumstances under which UN facilities are used to carry out terrorist activity, in blatant violation of international law, and in a manner that gravely endangers civilians, including UN staff.” 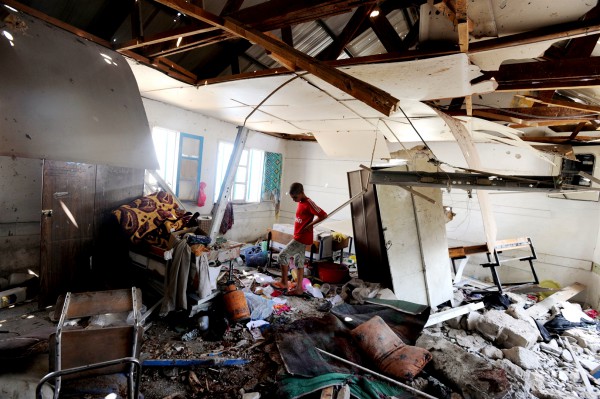 A Palestinian student inspects the damage at a UN school at the Jabalia refugee camp in the northern Gaza Strip. Although it was still unknown who was responsible, the UN immediately blamed Israel for the damage.  It is thought that Hamas was firing on Israel from the vicinity of the school at the time it was hit.

UN Secretary General Ban Ki-moon admitted that at least three UN schools, which were supposedly not used as shelters at the time, were used for warfare:  “The fact that they [UN schools] were used by militants to store their weaponry and, in two cases, probably to fire from is unacceptable,” wrote Ban in the executive summary.

The UN report also states that security, which the UN hired to protect its facilities, was lax.

To help protect its facilities during the war, the UNRWA hired several hundred locals as additional security personnel on three-month temp contracts without adequate training in security and no standard operating procedures for how to report security breaches.  Therefore, it is possible, the report admits, that weapons may have been hidden and then removed without being noticed.  (BOI Report, sections 83–90)

Israel’s Operation Protective Edge was launched against Gaza after a prolonged period of Hamas bombing Israel and because of the threat of Hamas terrorist tunnels leading into Israel. This house in Israel suffered a direct hit from a Gaza rocket.  (IDF photo)

Despite this finding by the report, international headlines predictably focused on Israel killing Palestinian students.

The UN report reviewed seven Israel Defense Forces (IDF) attacks on UN facilities in which three resulted in 44 Palestine deaths and the others led to 277 injured.

Ban Ki-moon had harsh words regarding the deaths at the hands of Israel, but made room for the IDF’s own investigations to determine illegalities.  There were no charges of war crimes in this report, which was primarily a fact-finding inquiry.

In response to the UN report, Ministry of Foreign Affairs (MFA) spokesman Emmanuel Nahshon said, “Israel makes every effort to avoid harm to sensitive sites.”  Nahshon also pointed to five criminal investigations that have been opened by the IDF that include the incidences involving the UN-run schools.

“All of the incidents attributed by the report to Israel have already been subject to thorough examinations and criminal investigations have been launched where relevant,” Nahshon explained.  (MFA)

The UN report describes a case of a girls’ school being hit by 81mm mortar rounds fired by the Israeli military, and of another girls’ school struck by an anti-tank projectile, while a third was hit by a missile.

One incident in particular at the third school, Beit Hanoun, is under investigation. Twelve to 14 people were killed and 93 injured.  The IDF announced its own investigation in September of 2014. 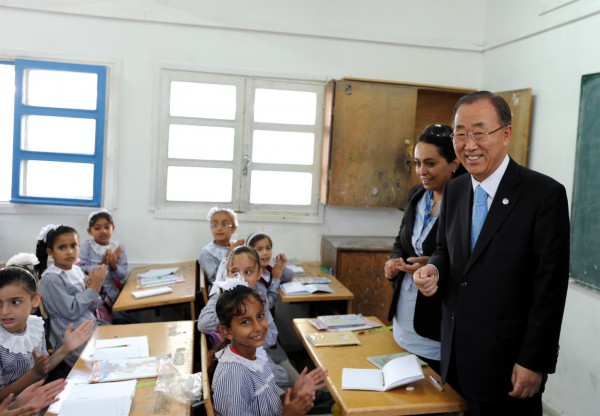 The report documents that several calls were made by the IDF to the Gaza field office and a UNRWA (United Nations Relief and Works Agency) security officer, informing them of the impending strike near this school due to heavy rocket firing in the area, and requested evacuation of the premises.  (BOI Report, sections 27, 29)

Palestinian locals denied militant activity in the area, but they may have been intimidated into lying about the matter.  (JPost)

At a fourth girls’ school, Jabalia, the report states that “no prior warning had been given by the government of Israel of the firing of 155mm high explosive projectiles on, or in the surrounding area of the school.”  (BOI Report, section 40)

If charges were to be brought against the IDF soldiers by Israel’s own investigators, IDF prosecutors would have to prove beyond a reasonable doubt that the school under attack was not a military target or that the attack failed the proportionality test with respect to the risk to civilian lives.  Failure to show such evidence might result in the UN pressing for intervention by the International Criminal Court.  (JPost)

The inquiry was headed by retired general Patrick Cammaert, a former senior officer in the Dutch military who later served as the commander of UN forces in the Congo and as Ban’s military adviser.  Also included were: Maria Vicien-Milburn of Argentina, who serves as legal adviser to UNESCO; Lee O’Brien of the United States, a diplomat who is a senior official in the diplomatic department of the UN Secretariat in New York; Pierre Lemelin, a Canadian professor and expert in international law; and K.C. Reddy of India, a former UN security officer.  (Haaretz)