“Every woman is to ask her neighbor and any woman living in her house for articles of silver and gold and for clothing, which you will put on your sons and daughters.  And so you will plunder the Egyptians.”  (Exodus 3:22)

Just in time for Passover, the Israel Antiquities Authority (IAA) announced that evidence of the influence of Egypt in the form of Egyptian artifacts had been uncovered in an underground cave in southern Israel.

“It is true the Israelites left Egypt but the evidence from the excavation in the cave shows the Egyptians did not leave the Israelites and their descendants,” IAA archaeologist Amir Ganor said.  “This has been attested to in archaeological excavations where we uncovered evidence from many years after the ‘Exodus’ which reflects the influence of Egyptian culture on the Judahite residents of the country.”

Ganor directed the excavation of the cave, which is in the vicinity of Kibbutz Lahav in southern Israel.  Inspectors from the Unit for the Prevention of Antiquities Robbery discovered it when conducting an excavation in Israel’s Tel Halif region. 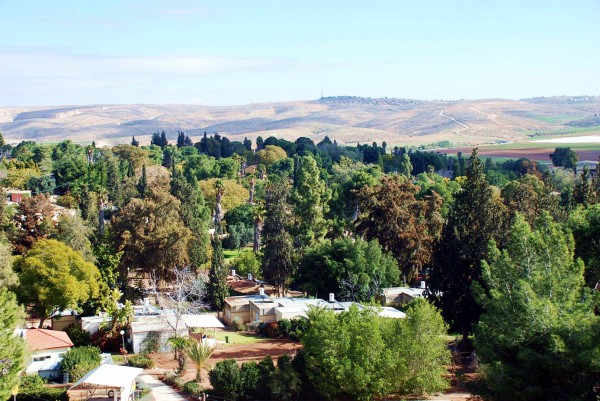 The cave had already been broken into, and pottery vessels from the Late Bronze Age (circa 1,500 BC) and the Iron Age (1,000 BC) had been looted.

In order to save the remaining Judean and Egyptian artifacts, a salvage operation was carried out in which over 300 pottery vessels of different types were uncovered.  Some were still intact.

Included in the find were fragments of jewelry, some of bronze, and others made of shells and faience (a type of quartz ceramic used to create Egyptian jewelry). They also found other vessels, some fashioned from yellowish alabaster, along with seals, seal impressions and cosmetic vessels.  (YNet)

While some objects are characteristic of Judean culture, others such as winged beetles and scarabs, were typical of the Bronze Age Egyptian culture.  Ganor said that some of the seals were fashioned out of semi-precious stones coming from Egypt and the Sinai Peninsula. 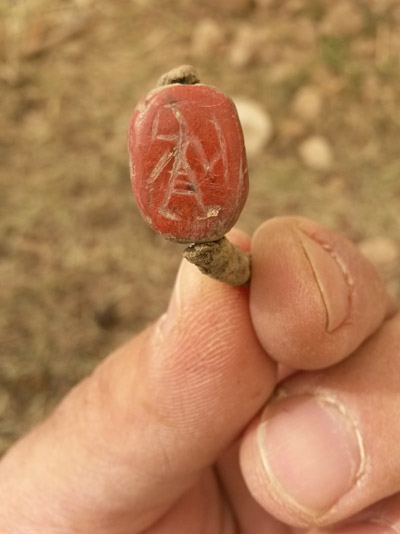 Ring inlaid with a seal depicting an Egyptian warrior holding a shield and sword.  (Photo by Israel Antiquities Authority, Unit for the Prevention of Antiquities Robbery)

These Egyptian artifacts indicate that Egyptian culture influenced the Judean people centuries after the Hebrew tribes had left Egypt.

Dr. Daphna Ben-Tor, curator of Egyptian archaeology at the Israel Museum said, “Most of the scarab seals found in the excavation date to the fifteenth – fourteenth centuries BCE,” adding, “During this period, Canaan was ruled by Egypt.”  (Arutz 7)

She said the seals contain the names of kings that ruled during that period, one example being Thutmose who reigned from about 1504–1450 BC.

Ganor explained that some of the objects were originally created in Egypt and likely brought to Israel by Jewish merchants.  Others were created in Israel in an effort to imitate techniques and styles that were Egyptian, using local materials.

“During the Late Bronze Age, Egypt was an extremely powerful empire and imposed its authority throughout our region.  Egyptian authority was not only manifested in political and military control, but was also a strong cultural influence that contributed to shaping society.  Along with an administration of Egyptian officials in Israel, a group of local elite evolved in the country, who adopted many of the Egyptian customs and their artistry,” Ganor said.  (Arutz 7)

IAA officials say they don’t yet know how the cave was used or why these objects were placed there.  (NBC)