“David went out to meet them and said to them, ‘If you have come to me in peace to help me, I am ready for you to join me.  But if you have come to betray me to my enemies when my hands are free from violence.'”  (1 Chronicles 12:17)

For the first time, Palestinian Authority Chairman Mahmoud Abbas has admitted that he rejected an offer by then-Israeli Prime Minister Ehud Olmert for a Palestinian state.

Reporter Raviv Drucker said to Abbas in an interview for Israel’s Channel 10: “In the map that Olmert presented you, Israel would annex 6.3 percent [of Judea-Samaria] and compensate the Palestinians with 5.8 percent [from pre-1967 Israel].  What did you propose in return?”

Abbas replied to Drucker: “I did not agree.  I rejected it out of hand.”

“Why, really, did you not accept Olmert’s offer?” Drucker asked a couple minutes later.

“He showed me a map.  He didn’t give me a map,” Abbas said.  “He told me, ‘This is the map’ and took it away.  I respected his point of view, but how can I sign on something that I didn’t receive?” 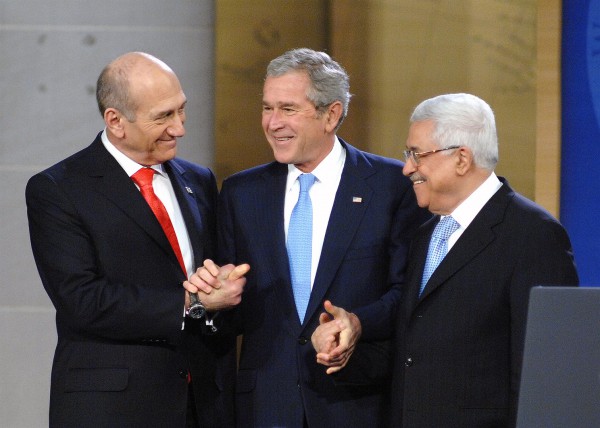 Olmert had brought only one copy of the map to the September 16, 2008 meeting with Abbas, and Abbas reportedly told Olmert that he would need to talk with his senior advisers before returning “the next day” to complete the talks.  He never returned.

Nevertheless, Olmert’s offer to Abbas included complete relinquishment of Jerusalem’s Old City as well as the near-withdrawal from Judea-Samaria.

In 2013, according to Times of Israel Middle East analyst Avi Issacharoff, “Israel would retain: The Ariel bloc, the Jerusalem-Maaleh Adumim bloc (including E1), and Gush Etzion” — the latter a target by Palestinian terrorists on Thursday who killed three.  Israel offered the Palestinians “the area of Afula-Tirat Zvi, in the Lachish area, the area close to Har Adar, and in the Judean desert and the Gaza envelope.”

Israel would also remove its presence from the Jordan Valley and absorb 5,000 Palestinian refugees across a period of five years.  The territory they would receive would be only 0.7% less than the 1949 Armistice Lines.  The Palestinians made no attempt to negotiate for better terms.

In an interview with Olmert that aired on Channel 10 Tuesday, the former prime minister said of his meeting with Abbas:  “I told him, ‘Remember my words, it will be 50 years before there will be another Israeli prime minister that will offer you what I am offering you now.  Don’t miss this opportunity.'”  (TOI)

In an interview with Al Jazeera in 2009, the chief Palestinian negotiator and an endorser of anti-Israel terrorism, Saeb Erekat, revealed Abbas’s true motives for rejecting the offer.

He said that Abbas “answered [Olmert] with defiance, saying:  “I am not in a marketplace or a bazaar.  I came to demarcate the borders of Palestine — the June 4, 1967, borders — without detracting a single inch, and without detracting a single stone from Jerusalem, or from the holy Christian and Muslim places.  This is why the Palestinian negotiators did not sign.”  (Al Jazeera)