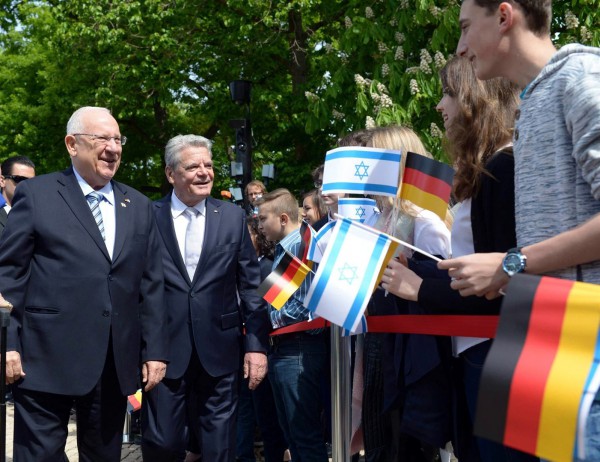 “Forget the former things; do not dwell on the past.  See, I am doing a new thing!  Now it springs up; do you not perceive it?  I am making a way in the wilderness and streams in the wasteland.”  (Isaiah 43:18–19)

Israel’s President Reuven Rivlin traveled to Germany for a three-day state visit this week to mark the jubilee of diplomatic ties between Germany and Israel.

On Monday, Rivlin was welcomed by German President Joachim Gauck at Bellevue Palace in Berlin.

During a state dinner, Gauck acknowledged the Holocaust and the recent rise in anti-Semitic violence, telling Rivlin that Germans were shocked and ashamed.

“The strong and deep friendship we celebrate this year, between Israel and Germany, was made possible by Germany taking responsibility for the crimes of the past,” he told Rivlin.

“Regardless of from where the evil of anti-Semitism arises—from the far Right or far Left, from veteran citizens or immigrants—it will not be tolerated in our country.  We will not allow fanaticism to poison our political climate, or engulf us in fear,” he said. 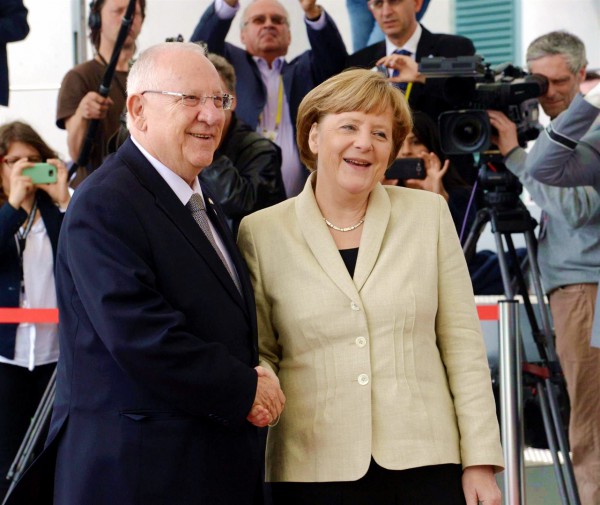 Israeli President Reuven Rivlin meets with German Chancellor Angela Merkel during a three-day visit to Germany, marking the jubilee of diplomacy between Israel and Germany.

“In the last fifty years, we have built a relationship rooted in friendship, mutual understanding, and the ability to look to the future while learning from the lessons of the past,” Rivlin told Merkel.  “It is a great honor for me to be the president of Israel with the opportunity to mark alongside you this remarkable jubilee.”

Rivlin called her a true friend of Israel and thanked Merkel for her continuing support over the years.

Merkel noted that in view of the terrible baggage of the Nazi era, Germany’s ties with Israel are truly a miracle.

Speaking with Rivlin to a group of 20 young leaders (10 Israeli and 10 German) she said, “After the Holocaust, it is a miracle that you are here together and, indeed, the relationship between Germany and Israel is itself a miracle.”  (Arutz 7)

“I am amazed by the courage of Israel’s politicians who continue to look straight into the future, without forgetting the past,” she said. 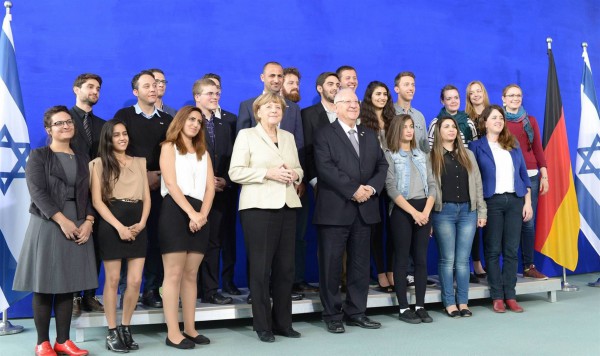 Rivlin and Merkel pose with a group of 20 German and Israeli young people.  (GPO photo by Amos Ben Gershom)

Relations between the two countries have not always been so simple.  When reparation talks were being held and $845 million was transferred to Israel in 1952, tens of thousands of angry demonstrators filled the public square in Tel Aviv in protest to establishing any ties to the former Nazi state or accepting their attempted “purchase” of forgiveness.

And when diplomatic relations began in 1965, a rather sour-faced Prime Minister Golda Meir watched as Israel’s President Zalman Shazar accepted the credentials of Germany’s first ambassador to the Jewish state, Dr. Rolf Pauls.

Crowds of protesters stood outside the president’s residence objecting.  The president’s office was also flooded with letters protesting the establishment of diplomatic ties with Germany.

In one letter, artist Moshe Bernstein, who lost his entire family in the Holocaust, asked the president how he could “face this ambassador, look in his eyes, [and] hear the sound of the German anthem … to the music of which children, men and women were led to the gas chambers.”

Shazar responded, “I have never thought we must serve the country and the people only in things in which there is pleasure.  We must also serve with acts that crush the heart like a vise.”  (HaAretz) 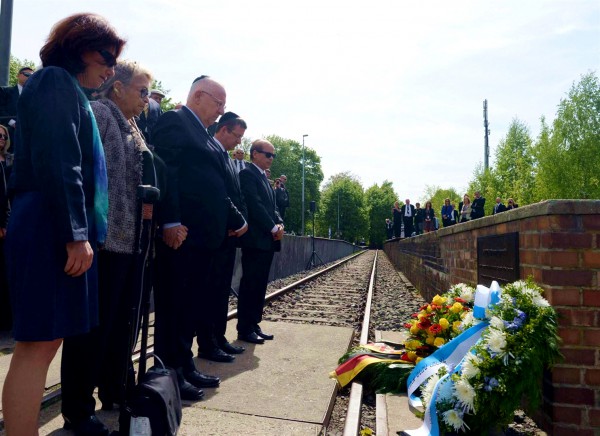 President Rivlin laid a wreath and lit a candle at Platform 17, where a memorial ceremony was held for Berlin Jews murdered in the Holocaust.  Berlin’s Jews were deported to the Auschwitz concentration camp in Poland from this platform.

Similar concerns are voiced on both sides.  The Chancellor responded to a question from one of the young leaders as to why Germany is selling arms to Israel:  “We sell weapons to Israel, which is often under attack, because we believe that Israel must have the ability to defend itself,” she said.

The Chancellor was defending her country’s most recent sale of Sa’ar 6 naval vessels to Israel, which will be used for patrolling Israel’s offshore gas fields. (HaAretz)

Merkel, however, told the youth that Germany still has an obligation to Israel—to support her existence and defense—precisely because six million lives were lost under Germany’s watch.  (JPost)

Rivlin told the young leaders it would become their responsibility to “provide both peoples with the ability to look to the future, not by ignoring the past, by learning from it.”

The new Israeli president has emphasized on many occasions that the “miracle” of Israel’s relationship with Germany today is based on shared values of freedom and democracy and not on any kind of compensation for the Holocaust.