Israel Marks 70th Anniversary of the Nazi Defeat In WWII 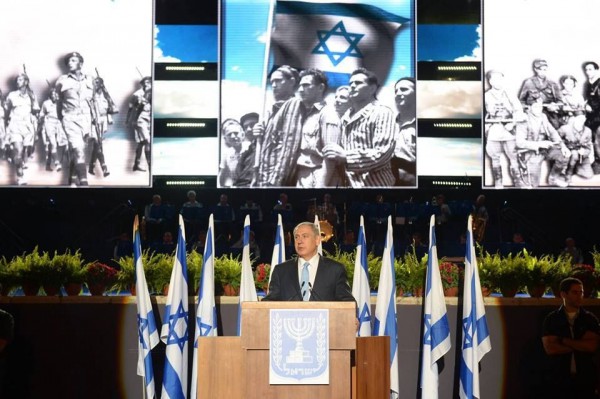 Israeli Prime Minister Benjamin Netanyahu at a ceremony marking the 70th anniversary of the victory over the Nazis. (GPO photo by Haim Zach)

“I will walk about in freedom, for I have sought out your precepts.  I will speak of your statutes before kings and will not be put to shame.”  (Psalm 119:45–46)

On Thursday, Israel marked the 70th anniversary of the Nazi defeat in WWII.

Rivlin told the audience of 6,000 that eight percent of the Jewish population, 1.5 million people, served in the War, and a third of that number fell in battle.  (Ynet) 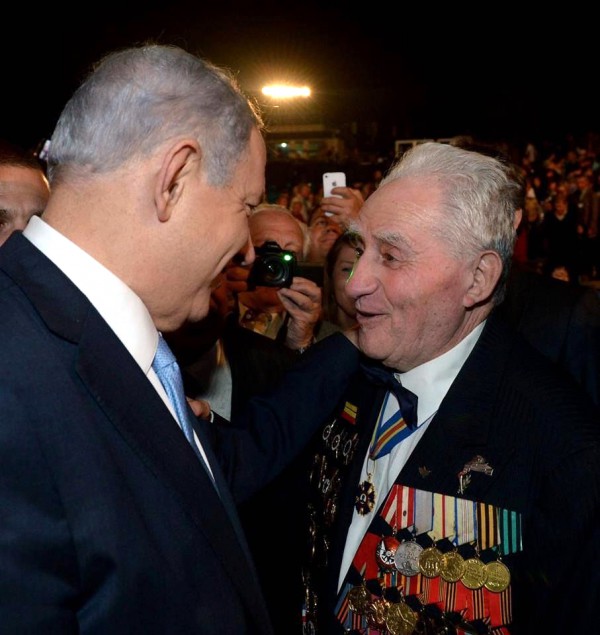 Prime Minister Benjamin Netanyahu speaks with a WWII veteran at the 70th anniversary of the end of WWII.

“In every branch of the military, of each army which fought against the Nazis, were found decorated and dedicated Jewish heroes.  No political affiliation, and no Jewish community was absent from the war,” Rivlin said.

Rivlin said the veterans had left an important legacy.

Netanyahu also emphasized the importance of the 70th anniversary of the Nazi defeat saying that the lessons of WWII are still relevant.

“The lesson that was learned during the years of the Holocaust is also valid these days; we paid an unbearable price because we did not have a state.  Now we do have a state, and soldiers with weapons, whose duty is to protect us from our enemies.  We know that the first lesson is that we must be capable and able to protect ourselves by ourselves against any threats, this is the lesson of 70 years since the victory over the Nazis,” Netanyahu said. 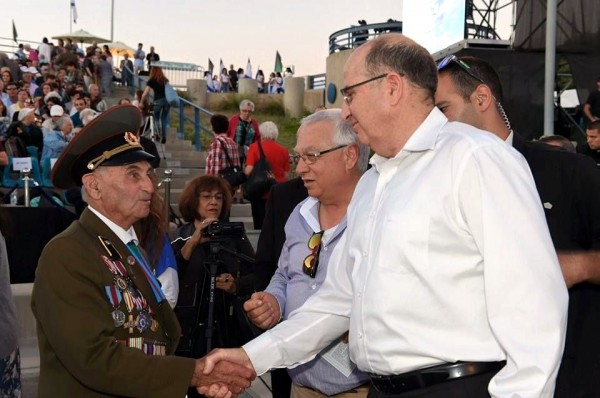 Israeli Defense Minister Moshe Ya’alon shakes the hand of Red Army veteran Efraim-Fiodor Papernyi, who is wearing his Red Army uniform and medals for bravery during the Second World War.

Among the many celebrations marking the end of WWII, the German Parliament celebrated May 8 as “a day that stands for a new beginning, and the double liberation from war and Nazism.”  (NewsTribune)

Indeed, it is spiritually significant that Nazi Germany surrendered and the end of WWII occurred on May 8, since the number 8 in Scripture often signifies new beginnings.

The United Nations also marked the anniversary of the Nazi defeat with a Peace and Unity tree planting last week.

“This particular tree, the weeping cherry, is a symbol of mourning for the fallen.  The white flowers of the weeping cherry are also meaningful, pointing to purity and rebirth,” said UN General Assembly President Sam Kutesa at the ceremony. 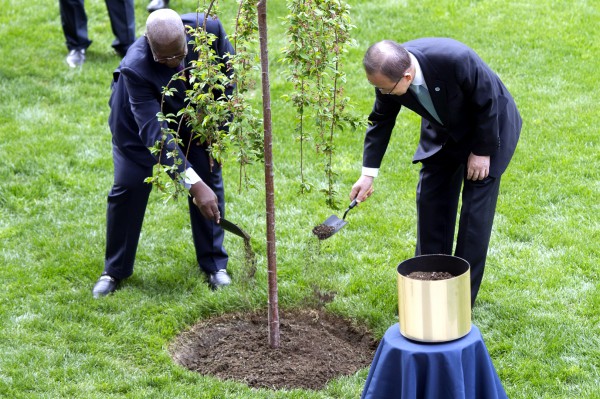 Sam Kutesa (left), President of the sixty-ninth session of the General Assembly, and Secretary-General Ban Ki-moon plant the tree of peace and unity.  (UN photo by Mark Garten)

“Equality is worth fighting for.  Democracy is worth fighting for.  Seventy years ago, a generation of men and women sacrificed in war so that we would inherit freedom, equality and democracy.  We cannot allow those sacrifices to be in vain,” Prosor said.  “With courage and conviction we must now fight for the ideals for which they lived and died.”  (Israel Ministry of Foreign Affairs)

Prosor also noted that history shows that “Jewish lives can never be entrusted to another people or another nation.  We must always be able to defend ourselves by ourselves.  The State of Israel is the fulfillment of that promise.” 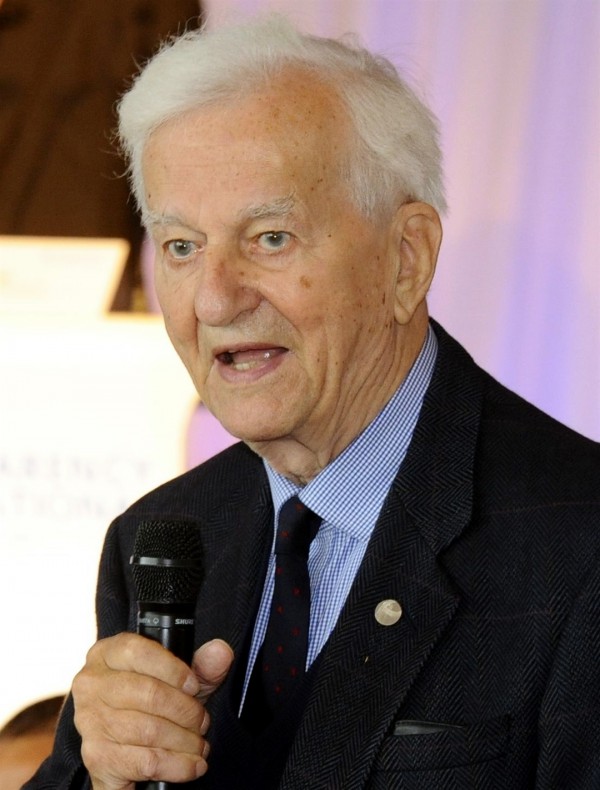 Thirty years ago, West German President Richard von Weizsaecker brought Germany’s citizens a step further toward reformed thinking when he called the war’s end the “day of liberation.”  After von Weizsaecker’s death in January, Chancellor Angela Merkel hailed this description as “a necessary, clear statement that was significant for our German self-image.”  (NewsTribune)

In case the world may worry that Germans will one day give in to the neo-Nazi movements of today, historian Paul Nolte believes that just as the Civil War remains relevant to the social framework of the US, so too will the Nazi era remain embedded in Germany’s soul “long into the foreseeable future, even when it lies 200 years in the past.”

Nevertheless, today anti-Semitism and persecution are on the upswing.

“Seventy-five years ago men, women, and children were rounded up and murdered because of what they believed, where they came from, how they looked, and whom they loved,” Ron Prosor reminded the United Nations last week.  “The same crimes are taking place in the Middle East.  Activists and political opponents are being silenced, homosexuals are being hanged, and Christians are being beheaded.”

“Make no mistake, evil is alive and well—and not just in the Middle East.  In the heart of civilized Europe, angry mobs can be heard chanting ‘Gas the Jews’; firebombs have been thrown at synagogues, young men are afraid to walk down the street wearing a kippah, and a kosher grocery store is targeted for attack,” he warned.