“There is no one on earth like him; he is blameless and upright, a man who fears God and shuns evil.  And he still maintains his integrity, though you incited me against him to ruin him without any reason.”  (Job 2:3)

On Friday night, some Israeli satellite viewers found that Hamas had hacked Israel’s Channel 2 reality show “Big Brother,” replacing about three and a half minutes of programming with a message of hatred.

Hamas threatened the Israeli public in both Hebrew and Arabic, saying, “Learn from history.  Flee for your lives and get out of our country.”

The clip incorporated sounds of explosions with fast-moving images and footage of past victims and terror attacks taking place.  The pictures show mourners wailing and a coffin draped in an Israeli flag, as well as a rocket siren firing and Israelis running for safety.

The alternate broadcast falsely accused Israelis of murdering “women and schoolgirls in cold blood,” likely referring to terrorists who die while trying to kill Jewish Israelis, an image included in the hack. 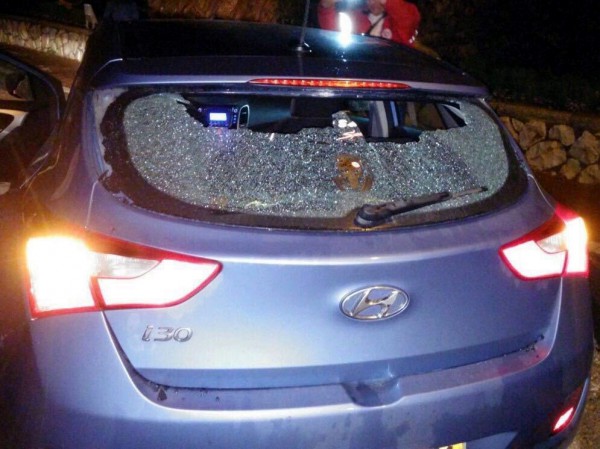 A vehicle damaged in a Palestinian shooting attack.

As photographs of real carnage from terrorist attacks show in quick succession, text on the video states, “Stay in your homes.  The story is not finished.  The continuation will come.”  According to Channel 2, the hack successfully targeted private dishes but did not infiltrate Israel’s primary satellite and cable providers.  (Times of Israel)

Israeli Prime Minister Benjamin Netanyahu had pleaded with the French president to take action against terror incitement against Israelis and Jews, perpetuated by the network.  While Eutelsat complied with the president’s resulting recommendations or directives, Netanyahu noted at the outset of his weekly Cabinet meeting on Sunday that “the channel was indeed removed but resumed broadcasting on another satellite.”

“We are fighting against media outlets that encourage the murder of Israelis and Jews,” Netanyahu said.  “This is not a question of freedom of the press, but rather stopping incitement to murder.”  (Israel HaYom)

Hamas quickly overcame the obstacle by linking up their propaganda channel to Nilesat, an Egyptian satellite.  (JPost)

Netanyahu stated that Israelis are working to prevent such broadcasts “in other places and in other channels.”

Meanwhile, on Friday, Ramallah-based Falastin al-Yom, an Islamic Jihad-affiliated television station urging Palestinians to carry out terrorist attacks on Jewish Israelis, was raided by the Israel Defense Forces (IDF) and the Shin Bet (Secret Service) and taken off the air.

An IDF official said that taking the channel off the air “illustrated the considerable efforts the military invests in disrupting and thwarting Palestinian incitement, which fuels terrorism across Judea and Samaria and in Israel.”