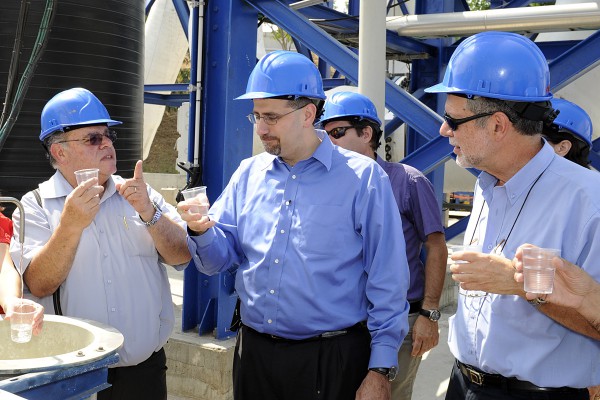 US Ambassador Daniel Shapiro samples the treated water while visiting the Hadera Desalination Plant, the newest and most modern desalination facility in Israel, and the leading desalination plant in the world.

“As you have been an object of cursing among the nations, O Judah and Israel, so will I save you, and you will be a blessing.  Do not be afraid, but let your hands be strong.”  (Zechariah 8:13)

San Diego is set to benefit from Israel’s innovative technologies that provide fresh water through desalination (removal of salt).

IDE Technologies, based in Kadima, Israel, provides Israel with much of its salt-to-fresh water supply.  It now plans to help relieve the San Diego region’s water shortages with a $1 billion desalination plant on the coast of southern California.

IDE Technologies said it has reached a 30-year operation and maintenance agreement with Poseidon Resources, which is partnering with the San Diego Water Authority to build the Carlsbad Desalination Project.

“The Carlsbad project that we’re about to embark upon will accelerate both the visibility of desalination in North America and the ability of potential clients, both public and private, to understand how creative project delivery, creative finance and innovative process design allow these types of projects to happen,” said Mark Lambert, CEO of IDE Americas.  (JPost)

The project, the largest seawater desalination plant in the Western Hemisphere, will deliver over 50 million gallons of potable water a day to San Diego by 2016.

IDE’s reverse osmosis technology will aid the region in obtaining seven percent of its fresh water supply from desalinated seawater by 2020.  (Haaretz)

According to IDE, the company already provides over two million cubic meters of fresh water per day around the globe.