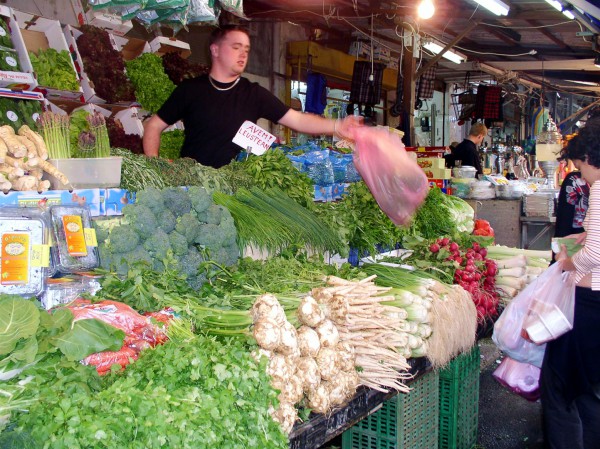 A vegetable stand in Israel.  (Photo by savtadotty)

“He [the Lord] causes the grass to grow for the cattle, and vegetation for the labor of man, so that he may bring forth food from the earth.”  (Psalm 104:14)

The Hebrew University’s Yissum technology transfer company has found a new way to extend the shelf life of vegetables such as lettuce, cabbage, celery, spinach and parsley.  (JPost)

The discovery, which was presented at the 19th Agritech Israel exhibition held in Tel Aviv this week, is especially important in an industry where as much as 50% of leafy vegetables can be lost before reaching the market due to natural wilting and deterioration (senescence).

The innovative technique was created by Dr. Rivka Elbaum of Hebrew University’s faculty of Agricultural, Food and Environmental Quality Sciences in Rehovot.  (JPost)

The method involves a food additive that is believed to have a beneficial effect on human health.  Leafy vegetables are dipped into a solution that delays the deterioration of the vegetables.

“The novel method invented by Dr. Elbaum is a simple, low-cost solution for delaying senescence in leafy greens, thereby increasing their shelf life.  The method, which has been tested on lettuce, could considerably increase the profitability of leafy greens, which comprise a large fraction of the fresh vegetable market,” Yissum CEO Yaacov Michlin said.  (JPost) 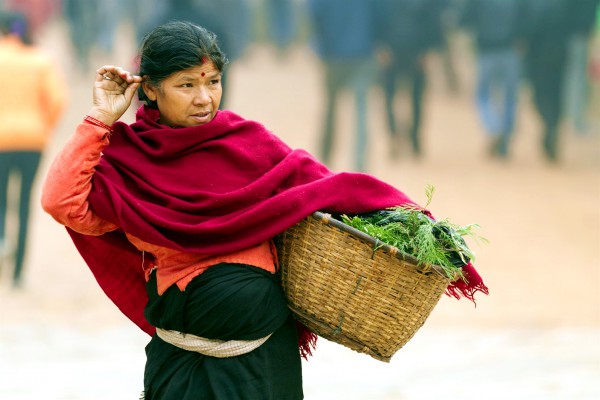 A novel Israeli invention will help greens to stay fresh longer.  In the above photo, a Nepalese woman carries a basket of food.

The problem of quickly wilting vegetables is worldwide, especially among farmers who have no access to refrigeration.  In countries such as India and Africa, farmers are forced to sell their produce locally where they receive much lower prices.  Consequently, they have barely enough to live on.  (Times of Israel)

This new method solves that problem since leafy vegetables will stay fresh for weeks without refrigeration.  This can help to break the cycle of poverty for rural farmers in the developing world by increasing profitability of leafy green production, a large part of the agricultural market.

This solution compliments others, such as Israeli company Pimi Agro’s all natural, hydrogen peroxide based formulation that claims to extend shelf life of fruits and vegetables up to 10 weeks.

Those products that have transferred to market until now currently generate $2 billion in annual sales.  The company has nearly 9,000 patents, licensed 786 technologies, and spun off 96 other companies.  (Benzinga)

Some of the companies with which Yissum works include Monsanto, Vilmorin, Syngenta, Novartis, Microsoft, Johnson & Johnson, Merck, Intel, Teva and many others.  (Businesswire)