“David was thirty years old when he began to reign, and he reigned forty years. In Hebron he reigned over Judah seven years and six months; and in Jerusalem he reigned thirty and three years over all Israel and Judah.”  (2 Samuel 5:4–5)

Archaeology continues to support the accuracy of the Bible.

At the Metropolitan Museum of Art in New York, a key piece of evidence supporting the existence of King David is on display in the “Assyria to Iberia at the Dawn of the Classical Age” exhibit running through January 4.

The exhibit includes a 13 by 16 inch stone found in Israel with an inscription that represents “the earliest extra-biblical reference to the House of David,” according to Eran Arie, the curator of the Iron Age and Persian Period at The Israel Museum, Jerusalem.

While parts of the ancient Hebrew inscription are missing, one critical word is clearly intact—BYTDVD, which in Hebrew reads Beit David or House of David.

“There is no doubt that the inscription is one of the most important artifacts ever found in relation to the Bible,” Arie wrote in the exhibit catalog.  This is especially true since it’s dated to only 150 years after David’s reign.

A recent article by the Biblical Archaeology Society also lauded the reference as “extraordinary:”

“The inscription hails from Tel Dan in northern Israel and commemorates the conquests of Hazael, king of Aram-Damascus, enemy of the ancient kingdoms of Israel and Judah.  Hazael claims to have killed both Jehoram, king of Israel, and Ahaziahu, king of “the House of David” —or Judah.  That the nation of Judah is referred to as the “House of David” is significant because it is the only archaeological evidence of a historical David—a belief that had been hotly debated prior to this discovery—thus substantiating part of the Biblical narrative.” 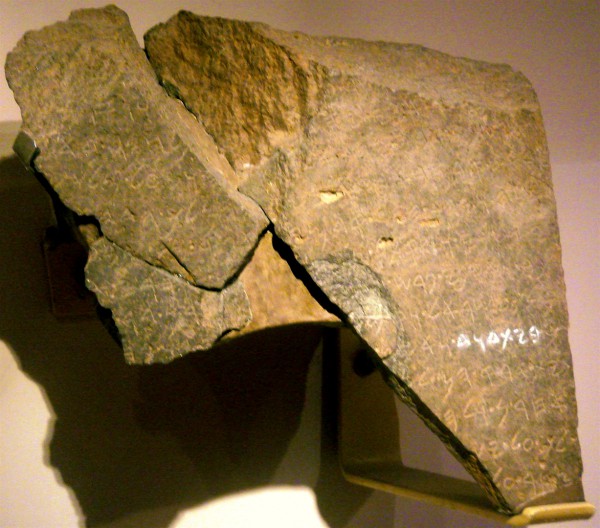 The inscription on the Tel Dan Stele is written in Aramaic using the ancient Phoenician alphabet . It dates to between the 9th century BC and the 8th century BC , when the ancient city gate was erected in Tel Dan, north of the Hula Valley.

Other finds in Israel also seem to substantiate David’s kingdom.

Ancient 10th century BC clay bullae, or seals, have been found east of Gaza that indicate the presence of a government in an area thought to be entirely rural at that time.  The evidence suggests that David and Solomon were more like kings than the simple chieftains described by some archaeologists.

Writing in the December issue of Near East Archaeology, archaeologist James W. Hardin of Mississippi University describes six clay fragments that at one time were used to seal important documents or expensive goods.

“They’re little bitty mud balls but they’re really important because of what they suggest about what’s going on,” explained Hardin.  Such seals were used by ancient officials to show that a package wrapped with string had not been opened. 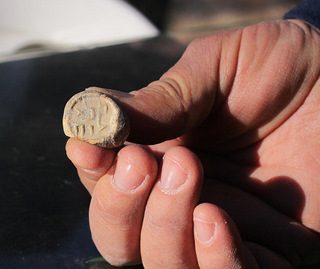 Tel Aviv University archaeologist Israel Finkelstein explains that this find is evidence of the existence of a city-state other than that of Gath, which was known to exist at that time on the southern coastal plain.

Gath was the city from which Goliath of King David fame originated.

Finkelstein is one of those who prefer to describe David’s kingdom as being of a far lesser scope.

Carbon dating for the period of the discovery is problematic, although clay pot fragments from the sediment in which the bullae were found are being analyzed using magnetic analysis.

The fragments were located at what is called Khirbet Summeily (KHEER-bit soo-MAY-lee), “a little site in middle of nowhere, outside of Philistia and outside Judah,” Hardin said.  It is located about 14 miles east of Gaza.  (Times of Israel) 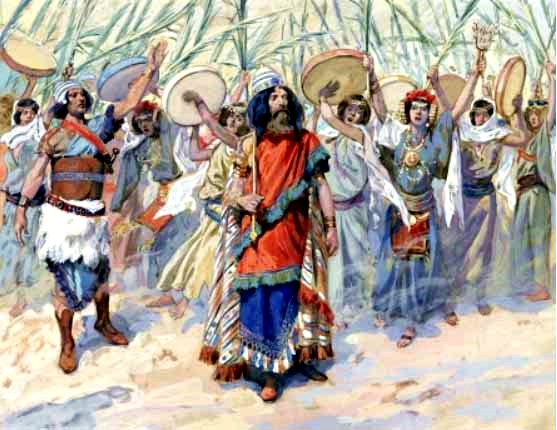 Festivities in Honor of David, by James Tissot

As Jeff Blakely of the University of Wisconsin-Madison (the excavation’s co-director) explains it, “Generations of scholarship have suggested [that the people of Khirbet Summeily were] farming, but over the past few years, we have slowly realized that humans rarely farmed this region.  It was a pasture.  Shepherds tended sheep and goats under the protection of their government.  Finding the bullae this past summer strongly supports our idea that Khirbet Summeily was a governmental installation.”  (BIN)

Additional evidence of the authenticity of Biblical accounts has recently appeared in archaeological journals, including the description of eight significant sites in Turkey and northern Syria, which revealed the existence of a large Philistine kingdom.

Gershon Galil,  Professor of Ancient History and Biblical Studies of the University of Haifa links this find to the kingdom of “Toi, king of Hamath” referenced in II Samuel 8:10.  There, it says that this king “heard that David had defeated the entire army of Hadadezer, he sent his son Joram to King David, to greet him and to congratulate him on defeating Hadadezer in battle – for Hadadezer had been at war with Toi.”

As Prof. Galil explains it, “We know for sure now that Toi of Hamath existed, and that he was indeed a historical figure.  The biblical text in the Book of Samuel is, therefore, well supported by the historical reality of the 10th century BC.”

This stands as additional evidence of the existence of King David and of the fact that he was far more than a small-time, hill-top chieftain.  (Israel Today)