The unique name of Eshba’al son of Beda, which was found on pottery shards in the Elah Valley where David fought Goliath, is the latest proof attesting to the accuracy of the Bible as an historical account.

The shards, which were found at the site of the Biblical city Sha’araim (today, Khirbet Qeiyafa) near Beit Shemesh are part of a ceramic jar that was found in 2012.  The jar dates back at least 3,000 years to the period of the Kingdom of Judah.

The inscription on the shards, which is written in Canaanite letters, reads, “The estate of Eshba’al son of Beda.” 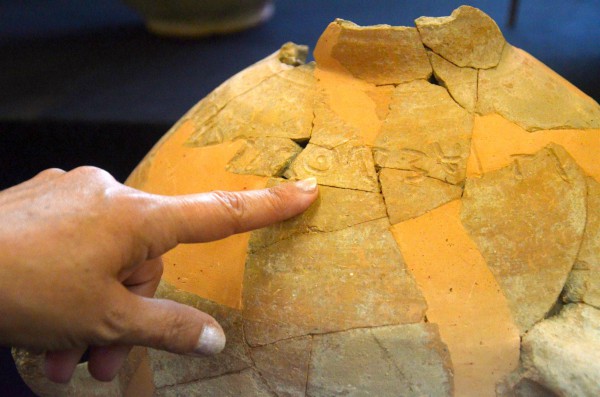 This clay jar from the time of King David has been reconstructed from pottery shards.  It bears the name Eshba’al Ben Beda.

The name Eshba’al is only linked with the time period during the reign of King David, who ruled in the first half of the tenth century BC at the creation of the Kingdom of Judah.  The name was not used during the later First Temple period.

Second Samuel chapter 4 records that Saul’s son Eshba’al was murdered by assassins and his head was brought to David in Hebron.

“There is the famous Eshba’al, son of King Saul.  He ruled for two years and then his head was cut off and brought to David in Hebron.  But this is not our guy; we have another Eshba’al,” said the excavation head Professor Yosef Garfinkel of Jerusalem’s Hebrew University.  (JP)

The pottery identifies a man named Eshba’al who is the son of Beda.

“The name Beda is unique.  We don’t know what it is, but Eshba’al is very well-known name.  It appears in the Bible a few times, but all the time it’s mentioned it’s from the time of King David,” Garfinkel said.  (CBN)

As Saar Ganor of the Israeli Antiquities Authority (IAA), who also worked on the dig explains it, “The correlation between the Biblical tradition and the archaeological finds indicates this was a common name only during that period.” 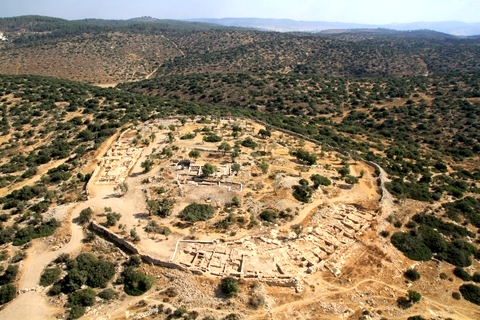 Khirbet Qeiyafa is identified with the Biblical city of Shaʽaraim.  (IAA photo by Skyview Company)

The researchers note that the appearance of the name on this jar suggests that this son of Beda was the owner of a large agricultural estate, and the produce from the estate was placed in jars bearing his name.  This reveals that an established economic class system was well in place at the time of the formation of the Kingdom of Judah.  (Times of Israel)

It also indicates that writing was developed at the time period, and used, at least by the educated.  This means that history could be passed down in written form.

Five years ago, no such inscriptions from the era of King David had been found. Finds like this, however, silence skeptics who say there is no proof that King David existed.  The inscription is one of four recently discovered from that time period, two from Khirbet Qeiyafa, one from Jerusalem, and one from Beit Shemesh.

Israeli Prime Minister Benjamin Netanyahu met with the team that made the discovery last week telling them, “This is an amazing find and a very important discovery.  It attests to what happened here, in this country, in the time of King David.”  (Arutz 7) 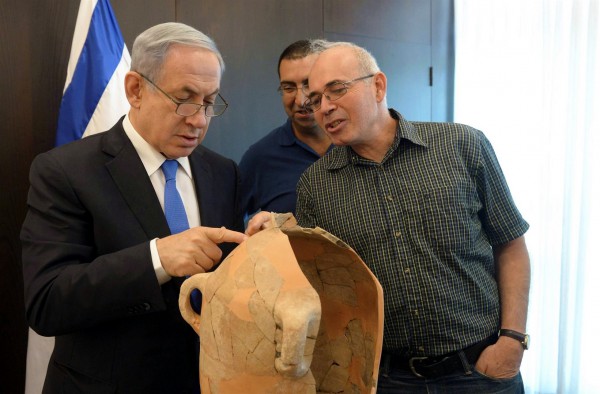 Prime Minister Benjamin Netanyahu meets with the archaeological team responsible for the discovery of a rare inscription, on a clay jar, from the time of King David.