“They even sacrificed their sons and their daughters to demons.  Yes, they shed innocent blood, the blood of their own sons and daughters, whom they sacrificed to Kena‘an’s false gods, polluting the land with blood.”  (Psalm 106:37–38)

Despite a crackdown in Israel on incitement, anti-Semitic hate-speech on the Temple Mount in Jerusalem continues to call for violence against Jews.

During the lead-up to Ramadan, a month often typified by violence against the Jewish People, Islamic cleric Ali Abu Ahmad delivered on the Temple Mount a fired-up religious teaching calling for the annihilation of Jews and the establishment of a caliphate — a government of Islamic rule.

“Palestine, the pearl of the Muslim lands, will be regained only with the return of the Caliphate, in the near future, Allah willing,” Ahmad said.  (MEMRI translation) 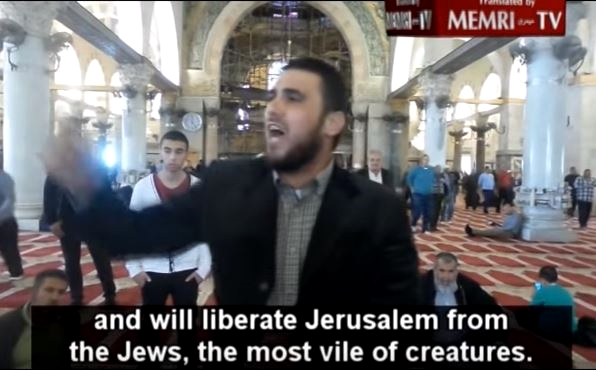 Ali Abu Ahmad’s May hate speech is not his first. In November 2014, he called on Allah to annihilate America and its coalition, asking as well for a Caliphate that “will liberate Jerusalem from the Jews, the most vile of creatures.”  (YouTube capture)

Ahmad’s sermon came despite Israel’s crackdown, such as the March conviction in a Jerusalem court of a Muslim preacher who used the Temple Mount as his platform for incitement to violence and racism.

Omar Abu Sa’ara was convicted for his message, which he addressed to the Jews: “It’s time to slaughter you.  It’s time to fight you.  It’s time to kill you.  And we will be able to do so with God’s help — we, and the Muslims, and the true believers, and the Islamic caliphate soldiers who will come to this country to free it from your filth. This day is approaching.”

After processing Abu Sa’ara’s indictment, the Jerusalem court that weighed his crimes stated, “Now, at the end of the verdict, we will set aside the law books and look for a moment at the reality of our lives.  Jews and Arabs live together in the State of Israel.  This is a fact that is not in dispute and which, it seems, won’t change in the near future.”

The overseeing judge, Shmuel Herbst, also gave a final statement, “I look at the defendant and see a person.  It would be very unfortunate if he looks at me and sees a monkey or pig that should be destroyed without mercy.”  (Arutz Sheva)

Two weeks prior, the Jerusalem District Court also ordered 11 months in jail for Islamic preacher Khaled al-Mughrabi, who had issued similar hate-filled calls for the murder of Jews.