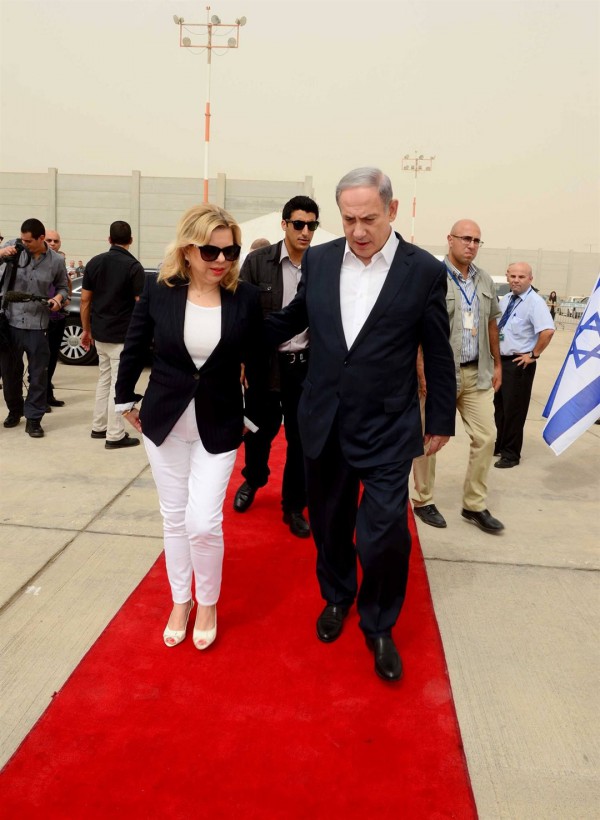 Prime Minister Benjamin Netanyahu and his wife Sara leave Israel amidst a sandstorm for an official visit to London.  (GPO Photo by Avi Ohayon)

“An unplowed field produces food for the poor, but injustice sweeps it away.”  (Proverbs 13:23)

Brandishing automatic weapons, bulletproof vests, helmets, masks and sunglasses, they carefully protected Netanyahu from a terror attack as he met with Cameron to discuss a shared cooperative approach to the defeat of militant Islam.  (Daily Mail)

The weapons carried by the police were believed to be German-made Heckler and Koch G36 assault rifles capable of firing 750 rounds a minute.  Driving blacked-out Land Rovers, they joined an even larger fleet of vehicles involved in security for the controversial world leader.

With the ongoing threat of militant Islam and especially the threat from the Islamic State known as ISIS impacting both nations, Netanyahu told a press conference before meeting with the British Prime Minister at Downing Street, “The Middle East is disintegrating under the twin forces of militant Islam:  The militant Sunnis led by ISIS and the militant Shiites led by Iran.”

Netanyahu added, “I believe that we can cooperate in practical ways to roll back the tide of militant Islam both in the Middle East and in Africa altogether.”

Referring to the present Iran agreement with the US and other European powers, the Israeli Prime Minister said, “All responsible countries must cooperate in order to stop Iran’s terrorism and aggression which, to my regret, will only increase as a result of the agreement.”  (Daily Mail)

Netanyahu identified three things on his agenda with Cameron: security, peace and technology, including joining forces with Britain over cyber-security.

He also said that he was ready to “immediately” resume negotiations with the Palestinians, “with no conditions whatsoever.”

The previous day saw clashes between pro-Palestinian and pro-Israeli protesters outside the Downing Street office.

The Israeli Prime Minister visited Britain as over 108,000 people added their signature to a petition calling for Netanyahu’s arrest for war crimes, sufficient to bring the issue up for debate in the British parliament. 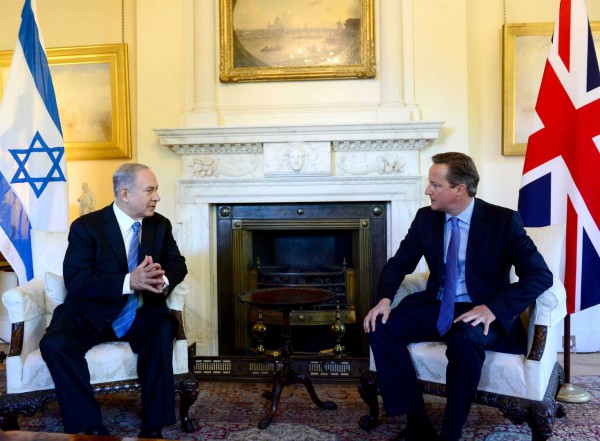 Meanwhile on Thursday, in an ongoing effort “to become a real political player in the Middle East peace process,” the EU parliament voted 525 to 70 to require the labeling of Jewish products produced in the territories, including Judea and Samaria, East Jerusalem and the Golan Heights.

With yet another attempt to force a diplomatic solution without the Palestinians having to return to the negotiating table, Israel’s Foreign Ministry said that the move to label Israeli products was discriminatory and had “a sharp smell of boycott.”

The resolution stipulates that there be no agreements with Israeli companies or institutions that have business with the settlements.  (YNet)

“When we told them this was a boycott they blew up and really lost their minds,” a senior Foreign Ministry official in Jerusalem told Haaretz.  “We told them that labeling products from the settlements is like a door that once opened cannot be closed.  We made clear to them that we did not see this as a technical step, but as a political step against Israel in every sense.” 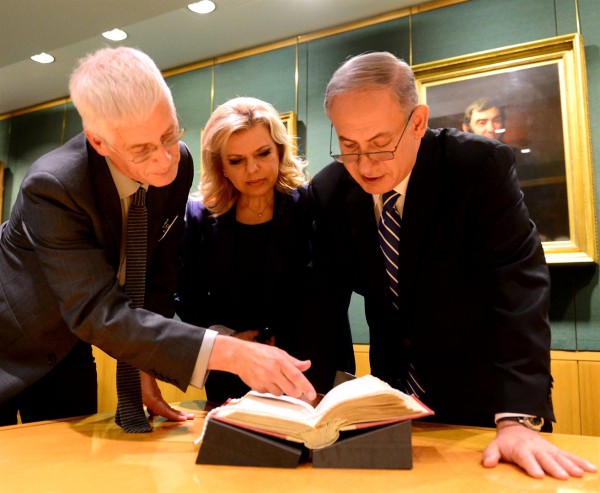 As part of his official visit to the UK, Prime Minister Benyamin Netanyahu and his wife Sara visited the British Library in London on Thursday night, where they were briefed about the original 1917 Balfour Declaration and a volume of Theodor Herzl’s writings that the Prime Minister’s father had edited in 1937.  The Netanyahus also viewed a Passover Haggadah, Tanakh, an edition of the Talmud (Tractate Bava Kama), and other volumes.  (Arutz Sheva)

The resolution also has articles stipulating actions against EU companies that do not conform to its dictates.

Article 12 calls for the EU to take “concrete measures towards settlers, including the adoption of a non-contact policy and visa ban, excluding settlement products from the EU internal market and freezing EU-Israeli relations.”

Prime Minister Netanyahu likened the resolution to actions of the Nazi era.

“We remember history and we remember what happened when the products of Jews were labeled in Europe,” he said.  “It’s a distortion of justice and of logic, not to mention that it does not advance peace.”

Of the 28 EU foreign ministers, those from Germany, Poland, Hungary, Bulgaria, Greece, Cyprus, Romania and others did not sign the resolution.  (YNet)