“On that day, when all the nations of the earth are gathered against her, I will make Jerusalem an immovable rock for all the nations.”  (Zechariah 12:3)

United States President Barack Obama said this week that blocking the Iran nuclear deal would force a US attack on Iran and consequently, rockets to fall on Tel Aviv.

He emphasized that Israel stands alone in her position on the Iran Deal.

“Because this is such a strong deal, every nation in the world that has commented publicly, with the exception of the Israeli government, has expressed support,” Obama said at a speech at American University in Washington, D.C., on Wednesday.

“The United Nations Security Council has unanimously supported it.  The majority of arms-control and nonproliferation experts support it.  Over 100 former ambassadors who served under Republican and Democratic presidents support it,” he added.  (TOI)

No mention was made of Middle East nations who have their own security concerns over the deal. 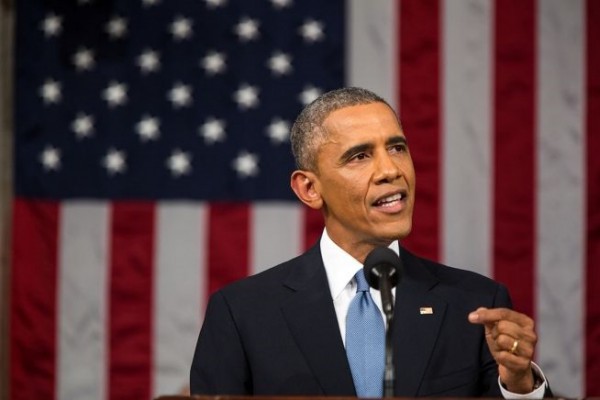 Netanyahu told them that the Iran Deal is not a partisan concern.

During Netanyahu’s webcast to 10,000 viewers, sponsored by the Jewish Federations and the Conference of Presidents of Major American Jewish Organizations, the prime minister rebuffed the notion that his own stance on Iran constituted a “personal attack” against Obama.

“This isn’t about me.  And it’s not about President Obama.  It’s about the deal.  I’m asking you to rise above partisan politics as we in Israel have risen above it,” Netanyahu said. 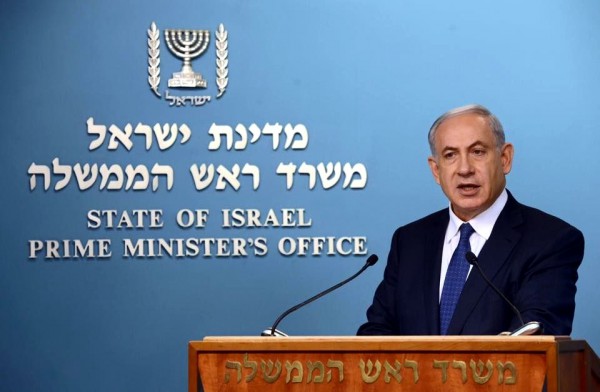 In a low blow, however, Obama struck out at opponents of the Joint Comprehensive Agreement likening Iranian hardliners who yell “death to America” to those who oppose the deal, such as Congressional Republicans:

“It’s those hardliners chanting ‘Death to America‘ who have been most opposed to the deal.  They’re making common cause with the Republican caucus.” 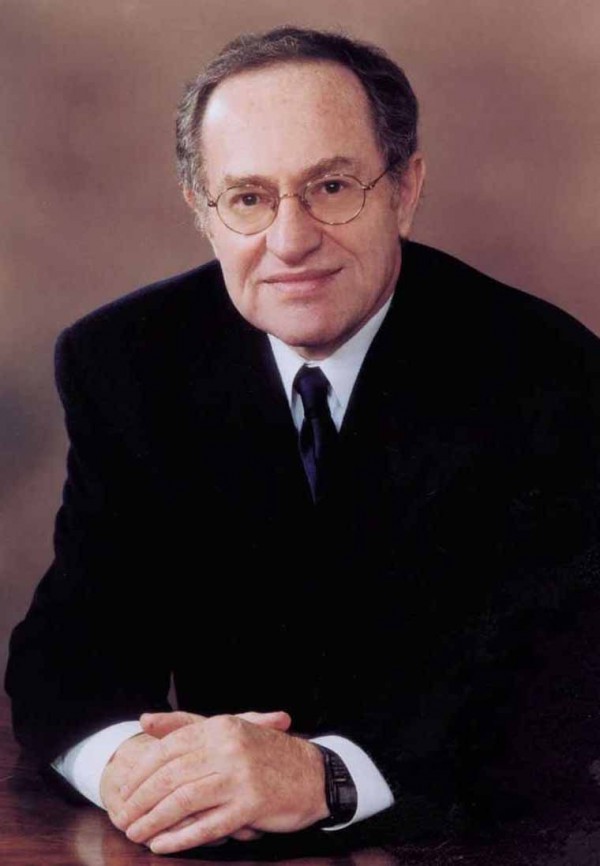 Professor of law at Harvard Law School Alan Dershowitz, who acknowledges he twice voted for Obama, writes that the president, “in his desperation to save his Iran deal, has taken to attacking its opponents in personal ways.”

“More Democratic members of Congress, more liberal supporters of the President, more nuclear experts and more foreign policy gurus are expressing deep concern about, and sometimes strong opposition to, the deal that is currently before Congress,” Dershowitz writes.  (Gatestone Institute)

On Tuesday, Obama brought 20 American Jewish leaders to the White House to debunk arguments against the deal and to warn that rejection of it would force the US to strike Iran’s nuclear facilities, with the consequences falling upon Israel.

“The result of such a strike won’t be [an American] war with Iran. … I can assure that Israel will bear the brunt of the asymmetrical response that Iran will have to a military strike on its nuclear facilities.”

“They will fight this asymmetrically.  That means more support for terrorism, more Hezbollah rockets falling on Tel Aviv,” Rosenbaum quoted as Obama saying.

Netanyahu cautioned the opposite, however, warning that “this deal will bring war.”

“Iran can keep the deal or Iran can cheat on the deal” and still develop a bomb, Netanyahu said, pointing out that Iran also has been building intercontinental ballistic missiles—to strike the US, not Israel.  (TOI) 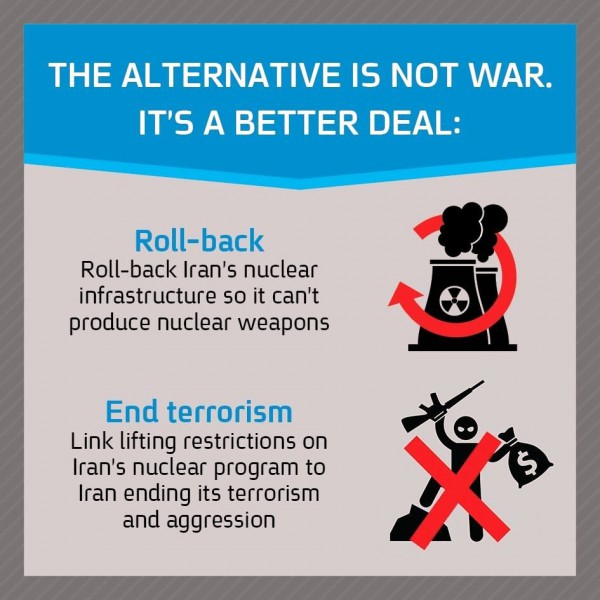 The alternative is not war.  It’s a better deal.  (Israel GPO graphic)

Tehran has been uncooperative, blocking UN inspectors from talking with scientists and military personnel about allegations of a secret nuclear-weapons program in Iran.  (WSJ)

In fact, recent satellite photos also show heavy machinery, such as bulldozers, working at the Parchin site—a suspected nuclear-military zone left out of the Joint Agreement but linked to separate talks between Iran and the International Atomic Energy Agency (IAEA).

The machinery shows what Democratic Senator Chris Coons describes as “vigorous efforts by Iran to sanitize Parchin” prior to planned inspections by the IAEA.

“Their actions seem to be against the grain of the agreement,” Senate Intelligence Committee Chairman Richard Burr told Bloomberg View on Tuesday, naming the cleanup of Parchin “a huge concern.”

“They [the inspectors] are certainly not going to see the site that existed.  Whether that’s a site that can be determined what it did, only the technical experts can do that,” Burr said. 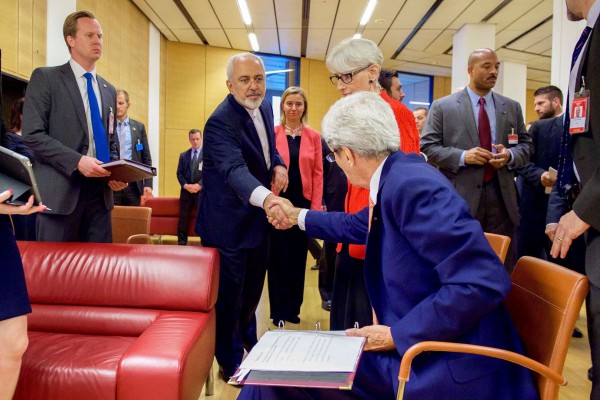 Free access to this site would likely reveal that Iran has been developing nuclear capabilities for military use.  Any cover-up just helps to prove Iran’s intentions not to comply with open access requirements on the larger nuclear deal.  It’s a trust issue.

Although scientists say that trace elements of enriched uranium in the soil cannot be completely removed by the October 15 inspection deadline, there is concern that IAEA might allow Iran to provide its own soil samples.

“The President would be well advised to stop attacking his critics and to start answering their hard questions with specific and credible answers,” Dershowitz encouraged.

“Does the deal reflect a reversal in policy from President Obama’s pre-reelection promise that ‘My policy is not containment; my policy is to prevent them from getting a nuclear weapon’?” Dershowitz asks.

“How exactly will the inspections regime work?” and “What will President Obama do if Iran is caught cheating on this deal during his administration?” are among Dershowitz’ other questions.  (Gatestone Institute)

“I will keep a watchful eye over Judah, but I will blind all the horses of the nations.  Then the clans of Judah will say in their hearts, ‘The people of Jerusalem are strong, because the Lord Almighty is their God.'”  (Zechariah 12:4–5)