While the Muslim Waqf—the Islamic authority that controls access to the Temple Mount—continues to bar both Christians and Jews from worshiping on the Mount and limiting the entrance of Jewish groups, Israeli authorities have loosened most travel restrictions for Muslims during the Muslim month of Ramadan for the annual fast.

In order to ease the movement of worshipers, for the first time in years, the military is allowing buses to travel from Judea and Samaria to Israel during Ramadan.

The Coordinator of Government Activities in the Territories Maj. Gen. Yoav Mordechai said that this year Arab men over 40 will be allowed to enter the Temple Mount without an Israeli permit.

The authorities are even allowing hundreds of Gazan residents access to the Temple Mount and the Al-Aqsa Mosque for worship on Fridays, the Islamic Sabbath.

All women from Judea and Samaria are allowed to enter the Mount, along with 800 residents of Gaza, for Friday prayers.

Palestinians will be allowed to enter Israel freely to visit families up to an initial quota of 100,000, which is believed to be the maximum capacity for checkpoints.

Another 500 Arabs in Judea-Samaria are being allowed to visit Gaza while 300 Palestinians living abroad are being given permission to visit their families in Gaza.  As well, 500 Arab residents of Judea and Samaria will leave Ben Gurion airport for travel abroad.  (Jewish Voice) 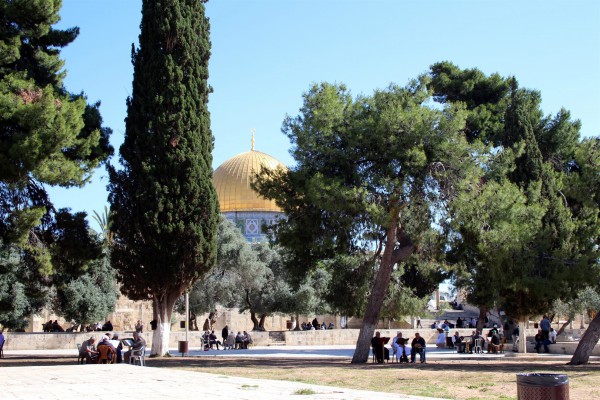 Palestinians relax and study on the Temple Mount

Although the numbers of Palestinians being allowed into Israel from Judea and Samaria for prayer and to vacation had been increasing in recent years, last year’s kidnapping and murder of three Yeshiva (rabbinic academy) students during the month of Ramadan caused a scaling back of permits.

Typically, Palestinian buses in the past have been stopped at Israeli checkpoints and not allowed to enter Israel proper.  Those Palestinians with valid permits have had to transfer to Israeli buses.  The new ruling allows the Palestine buses to continue into Israel.

Ironically, the easing of access to the Temple Mount during Ramadan is taking place against a backdrop of continued and ongoing discrimination against Jews who are not allowed to pray there.

Thanks to an agreement made by then Defense Minister Moshe Dayan with the Jordanian authorities, the Israeli government gave the Jordanian-run Islamic Waqf control of the Temple Mount soon after Israel reclaimed it in 1967.

As a result, religious Jewish groups in particular have been singled out with restrictions placed on them as to the number of individuals allowed to enter and as to the hours in the day when Jews are allowed entrance.  (Arutz 7)

Those who are suspected of praying (even when this is not the case) are ejected from the Temple Mount and even arrested.  Jews are even banned from drinking from Muslim water fountains.  All of this in the face of Jerusalem court rulings that overturn such prayer bans and support freedom of religion on the Mount (including Jewish prayer).

The following video shows Palestinians refusing to allow Jews on the Temple Mount to drink.

The situation is so dire that an email campaign to Israeli parliamentarians protesting “anti-Jewish discrimination on the Temple Mount” has begun.

An example of one email to the Minister of Justice follows:

In recent days the Israel police have been forbidding Jews from bringing water onto the Temple Mount or drinking water from the public drinking fountains on the Temple Mount.  This policy is illegal and inhumane.  The right to pray and to drink water are basic human rights which must never be denied any human being because of their religion or race or gender.  This anti-Jewish discrimination on the Temple Mount must stop immediately.  I call on you to urgently address this issue.

Such restrictions on the part of the Islamic Waqf has not thwarted the hopes for equitable access on the Temple Mount for all peoples or the plans of religious Jews for the rebuilding of the Jewish Temple on the Mount.

Rabbi Yehuda Glick leads the Temple Mount Heritage Foundation in Jerusalem which is working toward assuring access for all religions to the Temple Mount and strengthening ties between the Mount and the Jewish People.  These efforts resulted in an assassination attempt on his life by a Palestine terrorist in October 2014. 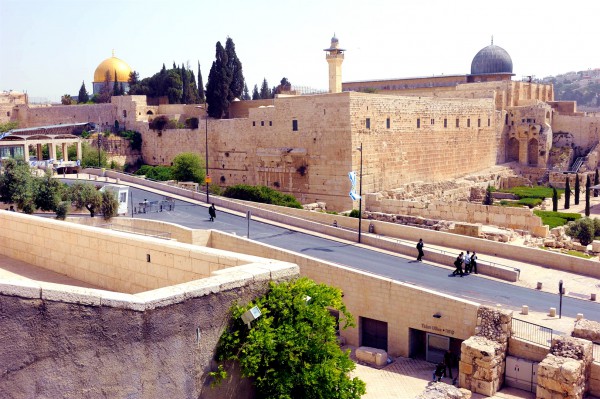 A view of the Temple Mount in Jerusalem

Glick, who is also the former director of the Temple Mount Institute, told the Internet portal Breaking Israel News that, in the process of researching the twelve stones of the priestly breastplate, Glick’s partner, Yehoshua Friedman, discovered billions of dollars of gold under Mount Eilat.

As Glick notes, the Creation story in Genesis tells us that “the gold of that land is good” (Genesis 2:12).  And “because of the extensive Biblical proof we presented about the exact location where the gold was to be found, we won the license to begin digging,” Glick said.

Once Glick and Friedman sign agreements with investors, they are ready to act on their exclusive license from the Israeli government to mine this gold, which will be used to pay for the reconstruction of the Temple.  (BIN)

“Whether we use the gold itself for creating vessels and decoration or by selling the findings and using the money to buy the materials and manpower needed to rebuild the Temple, we look forward to that great day!” said Glick.