“He who conceals hatred has lying lips, And he who spreads slander is a fool.”  (Proverbs 10:18)

A Palestinian sheikh is using his pulpit on the Temple Mount in Jerusalem to incite hatred of the Jewish People by using the ancient blood libel.

Sheikh Khaled Al-Mughrabi, who is on payroll of the Waqf (Islamic religious authority in charge of the Temple Mount) and teaches twice a week from the pulpit of the Temple Mount Al-Aqsa Mosque, recently told his congregants that the Nazis burned European Jews during the Holocaust because they were kidnapping Christian children to use their blood to make the Passover matzah (a Medieval creed known as blood libel).  (Times of Israel)

In addition, he said that the Jews worship Satan, were responsible for the World Trade Center attacks, and that they control Free Masonry, whose members sacrifice their wives and children in secret ceremonies.

“They have smaller gods, from one to nine,‎ and they have gods who are stronger than Allah, from 11 to 34,” Al-Mughrabi said.  “Devil or Satan is ‎number 11 for them.  If you look at history, my brothers, you’ll see that the number 11 is ‎holy for the Jews, and 666 is also a holy number, three times six signifies the Devil.‎” 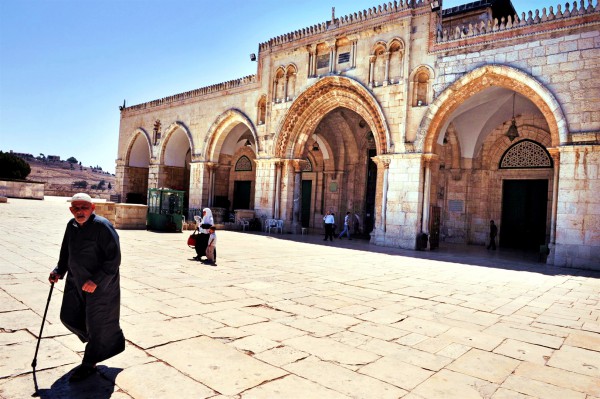 The al-Aqsa Mosque on the Temple Mount is likely situated where the Royal Stoa was located in Yeshua’s (Jesus) time.

In response to this incitement, the Simon Wiesenthal Center sent a letter to Jordan’s King Abdullah, who has control over the Temple Mount Waqf, as well as Palestinian Authority President Mahmoud Abbas, encouraging them to take immediate action against Al-Mughrabi for using the infamous blood libel creed to justify the Nazi Holocaust.

The letter emphasized the Temple Mount as a place holy to all three monotheistic religions: Judaism, Christianity and Islam.

“It should be an area that promotes peace, tolerance, and mutual understanding.  However, the Al-Aqsa Mosque has now been used to repeat horrific lies and legitimize genocide.  Left unchallenged, the Sheikh’s ‘sermon’ will only spawn more hatred and violence,” the letter stated.

The Palestinian Authority preacher brushed aside charges of anti-Semitism.  “It doesn’t matter what they [Simon Wiesenthal] said.  What I said is that the story happened in Europe and many countries in Europe and I still say that,” the sheikh told the Jerusalem Post.

Similar libels are broadcast over PA television.  In a recent program, the host said, “Israel is a cancerous tumor … [Jews] are usurers … They control the media, the money, the press, the resources, the plans.”  (JPost)

For thousands of years, such vicious slander over the centuries has resulted in persecutions.  Much of this is due to a misunderstanding of what it means for the Jews to be the Chosen People.  Still others have chosen to believe a religion that tries to replace God’s covenantal plan of redemption for all mankind with an opposite plan that seeks to “form a confederacy against [God].”  (Psalm 83:5)