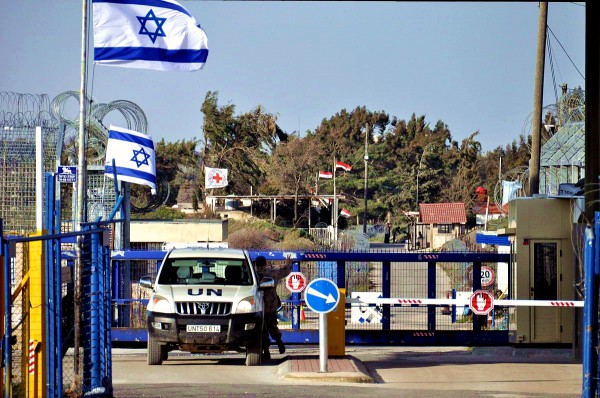 The UN controlled border crossing point between Syria and Israel at the Golan Heights.

“Blessed are you, Israel!  Who is like you, a people saved by the Lord?  He is your shield and helper and your glorious sword.  Your enemies will cower before you, and you will tread on their heights.”  (Deuteronomy 33:29)

The United Nations has ordered its peacekeepers to abandon positions in Syria and flee to Israel in the face of terrorists.

This decision comes after the Al-Nusra Front, a UN-designated terrorist group, in August seized the Quneitra crossing into Syria from Israel and kidnapped more than 40 Fijian troops serving in the United Nations Disengagement Observer Force, which they later released.

“These and other forces can now be seen on the streets of Tiberias,” a Bibles For Israel writer said.  “I recently parked my car next to a UNDOF SUV filled with the released Fijian observers.” 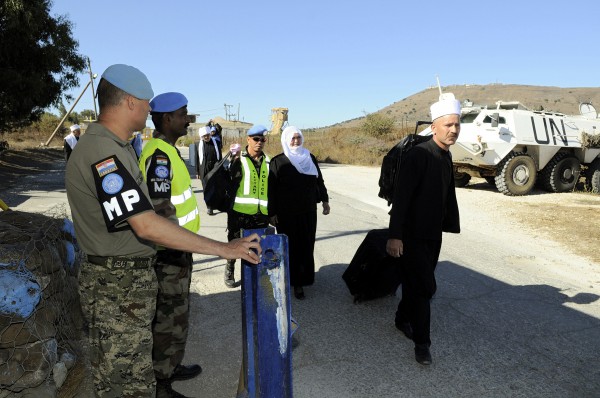 The same rebel group also clashed with 75 Filipino members of the force, who fled to a nearby outpost.

Rebel forces are still in control of the Quneitra crossing and most of the 510 square km (196 square miles) of the Syrian side of the 1974 ceasefire line, forcing both Syrian government forces and civilians from the area.

“Armed groups have made advances in the area of UNDOF positions, posing a direct threat to the safety and security of the UN peacekeepers along the Bravo line [the Syrian border of the 1974 buffer zone between Israel and Syria] and in Camp Faouar [the UNDOF headquarters located in Syria],” UN spokesman Stephane Dujarric said. 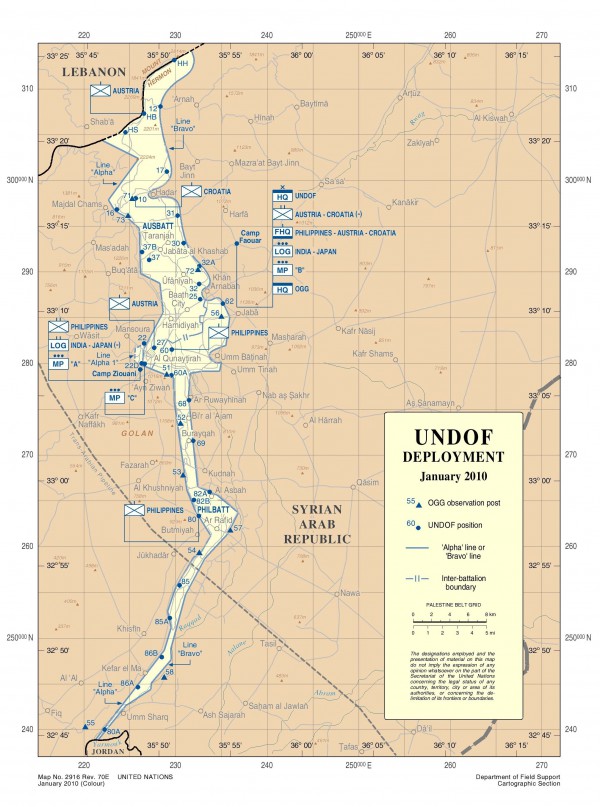 Syria holds 510 square kilometers (about 200 square miles) of the Golan Heights on the Syrian side of the ceasefire line, with UNDOF occupying a buffer zone that reaches from Lebanon in the north to Jordan in the south.

In May 1974, United Nations Security Council Resolution 350 established UNDOF as a supervising force over the ceasefire between Israel and Syria, after a surprise joint attack on October 6, 1973 by Egypt on Israeli forces on the Suez Canal and in the Sinai as well as by Syria on Israeli forces in the Golan Heights.

Today, Israel and Syria are still formally at war, and withdrawal from the Golan, which serves as a strategic military buffer zone, has been seen as a key to any peace agreement with Syria.

Until now, UNDOF has performed its functions with the full cooperation of both sides, with its mandate being renewed every six months.

As Syria continues to disintegrate, the UN mandate seems irrelevant.

“They are there to oversee an agreement between two countries—Israel and Syria—and in practice there is no Syria anymore,” said Stephane Cohen, a former Israeli military liaison officer with UNDOF.  (AP)

UNDOF fleeing the Golan after the abductions and seizure of the strategic Quneitra border crossing from UNDOF underscores to Israelis the importance of keeping the Golan as a buffer zone. 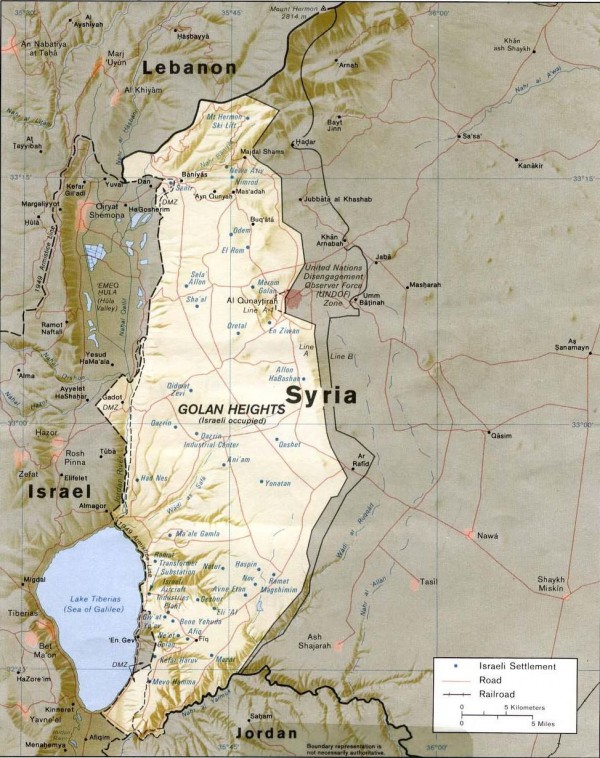 According to the CIA, Israel holds 1,300 square kilometres (500 sq. miles) on the Golan Heights.

Recently, Commentary Magazine Assistant Editor Seth Mandel noted that, in essence, the UNDOF peacekeeping forces have left Syria, and therefore have ceased to keep the peace.

Mandel said that in their new positions on the Israeli side of the border, they will become irrelevant.

Israeli soldiers are now protecting the UN forces that are supposed to act as a buffer between the Syrian forces and Israel.

This failure of UN forces raises questions regarding the wisdom of US Secretary of State John Kerry’s suggested plan for Israel to place international peacekeeping forces at the border of the West Bank (Judea-Samaria) and Jordan as part of a two-state peace plan.

If UN peacekeeping forces are going to flee in the face of terrorism, it seems clear that until terrorism is defeated and the region is at peace, Israel can only rely on itself to prevent terrorist groups from harming Israeli civilians and overtaking the West Bank.