At the UN World Health Organization’s (WHO) 68th World Health Assembly on May 21, 2015, the United Nations has struck once more at the Jewish state, this time singling out Israel among all the world’s nations as a violator of health rights.

The WHO’s vote to condemn Israel for alleged violations of the health rights of Syrians in the Golan Heights passed by 104 to 4.

Supporting documents included fraudulent entries from Syria—this, despite Israel’s generous medical treatment of more than 1,500 Syrians as of February, not to mention recent medical trips to aid the Nepalese.  Both humanitarian efforts should be highlighted as beacons of light in a dark world.  (BBC)

Before the vote was taken, however, the Syrian delegation participating in the health-rights vote added a document to the WHO’s records that accuses Israel of operating field hospitals to treat Syrian rebels “so that they resume their subversive terrorist activities directed against the country’s peaceful citizens and its infrastructure.” 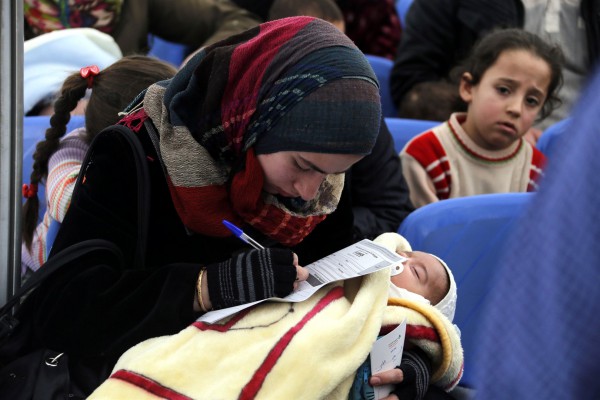 A Syrian refugee fills out an application at the UNHRC registration center in Tripoli, Lebanon.  (World Bank Photo by Mohamed Azakir)

The Syrian document, annexed to the official WHO report, also deceitfully claims, “The Israeli occupation authorities continue to experiment on Syrian and Arab prisoners with medicines and drugs and to inject them with pathogenic viruses.”

This accusation comes days after The New York Times reported that “there is mounting evidence that [Syrian leader Bashar al-Assad’s] government is flouting international law to drop jerry-built chlorine bombs on insurgent-held areas.”

“We know the sound of a helicopter that goes to a low height and drops a barrel [of chlorine].  Nobody has aircraft except the regime,” said Hatem Abu Marwan, 29, a White Helmets rescue worker.

While Israel technically has been in a state of war with Syria for decades, Israeli medical personnel have shown unprecedented care to Syrians wounded in the nation’s four-year civil war.  Israel’s Military Medical Corp has treated Syrians even under fire who are seeking help at a field hospital created for wounded Syrians, or transfers them to nearby hospitals in Israel.

The need is great as the medical infrastructure of Syria collapses.

To meet a similar humanitarian need, Israel set up field hospitals to treat wounded from Gaza during last summer’s war. 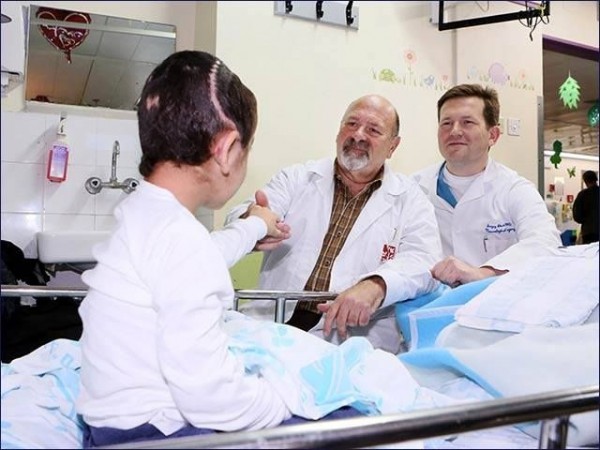 “We cannot ignore that the Syrian conflict is happening behind our door.  We cannot close our eyes, ears and hearts to what is happening there.  It’s a catastrophe,” said Dr. Amram Hadary, director of the Ziv Medical Center trauma unit, in Safed, Israel.  “It’s our duty as a regional hospital, where we are located along the Lebanese border on one side and the Syrian border on the other side.”  (ISRAEL21c)

The Syrian wounded treated in Israel includes a 9-year-old Syrian boy who was injured when a Syrian warplane sent by al-Assad struck his village.  The bomb blew apart his legs and killed his two cousins.  (Los Angeles Times)

Haifa’s Rambam Hospital has treated about 20 percent of the incoming patients who cross the Syrian-Israeli border in the Golan Heights seeking medical aid.

Israel was also one of the first foreign nations on the scene in Kathmandu, Nepal, after the small country was struck by a magnitude 7.8 earthquake this Spring; the Israeli Defense Forces and Israeli NGOs, including IsraAID, brought the second greatest number of disaster responders and medical personnel to Nepal among all responding organizations.  (Algemeiner)

Israel’s contribution to Nepal was officially recognized by the United Nations’ Office for the Coordination of Humanitarian Affairs last month.  But that seems irrelevant to the political agendas in the region.

Two months ago, in a move similar to this, the UN Commission on Women’s Rights condemned Israel alone among all nations for being an “Abuser of Women’s Rights.”