“Truthful lips endure forever, but a lying tongue lasts only a moment.  Deceit is in the hearts of those who plot evil, but those who promote peace have joy.”  (Proverbs 12:19–20)

The 13-year-old Palestinian who stabbed a 13-year-old Jewish boy while he was riding a bicycle is healing up at a Jerusalem hospital, despite claims by Mahmoud Abbas and other Palestinians that the very-much-alive Ahmed Manasrah is a victim, murdered by Israel.

On Wednesday, Abbas accused Israel of “occupation and aggression” and of “terrorizing our people, homes, trees, holy places and [that they] execute our boys in cold blood, as they did with the boy Ahmed Manasrah and other children in Jerusalem and other places.”

Israeli police released photos and video of Manasrah, after Palestinian Authority chairman Mahmoud Abbas said Wednesday in a televised night speech that the teenager was killed by Israeli forces, which he said, are practicing the “summary execution of our children.”

On October 12, in Jerusalem, Manasrah and his 15-year-old cousin stabbed the 13-year-old bike rider and a 25-year-old Jewish man nearby. 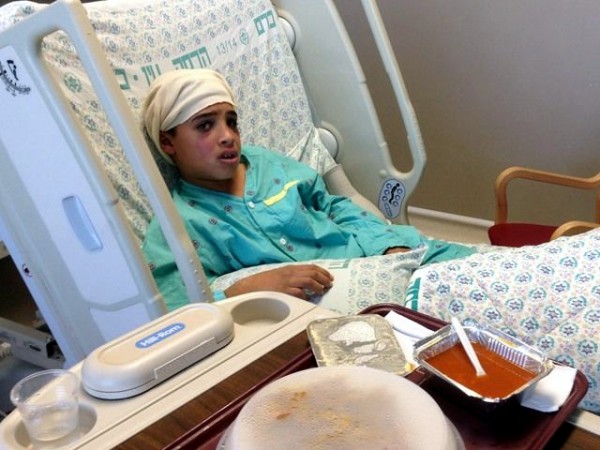 Ahmed Manasrah sits in his room at Hadassah Hospital beside an array of food, his head wrapped in a bandage.  His 13-year-old Jewish victim remains in critical condition.  (GPO photo)

“Now we have a new big lie; that new big lie is that Israel is executing Palestinians,” Netanyahu said.  “First of all, he’s [Manasrah’s] not dead; he’s alive.  Secondly, he’s not innocent; he tried to kill, murder, knife to death an innocent Israeli youngster, 13 years old, riding a bicycle.”

“This Palestinian terrorist is now being treated in Hadassah Hospital in Israel,” Netanyahu added.

“The only way that we can fight this big lie, all the other lies that are hurled at Israel and spread through the Palestinian social network to the world is to tell the truth,” Netanyahu emphasized.  “We expect all our friends and anyone concerned with the facts or the truth to look at these facts, to see the truth, and not to draw false symmetry between Israeli citizens and those who’d stab them and knife them to death.”

Abbas has said previously that the blood spilled by Palestinian terrorists in Jerusalem is pure.  Last Wednesday he stated, “We will continue our political, national and legal fight, and we will not remain tied to agreements that Israel does not respect” — another false claim referring to the Oslo Accords which require the Palestinian Authority and Israel to conduct negotiations with each other for a two-state solution.

Netanyahu has remained willing to negotiate with Abbas, but Abbas has refused time and time again — a fact that he has distorted in complaints to the United Nations and other internationals by claiming that Netanyahu has rejected peace talks.

The #AhmedMansrahExecution social-media campaign carried Abbas’ incitement to the level of second- and third-hand misinformation.  Social media also has echoed Abbas’ first “big lie,” that Israel is trying to change the Temple Mount status quo or destroy the Al-Aqsa Mosque.

Israeli officials presented to the assembled journalists what the Temple Mount status quo actually is, giving the numbers of those who visit the Mount every year: 3.5 million Muslims, 200,000 Christians, and 12,000 Jews.

Netanyahu also told journalists Thursday that any other country that saw terrorists attacking with “knives, meat cleavers, axes, trying to kill people on their streets” would respond as Israel has done.