The two groups are guilty of routine harassment of Jewish visitors to the holy site, intimidating them, and stopping them from praying or even being present there.

“The goal of the Murabitun and Murabatat is to undermine Israeli sovereignty on the Temple Mount, change the reality and the existing arrangements, and harm freedom of worship.  They are linked to—and are directed by—hostile Islamist organizations,” a statement from the Ministry’s office said. 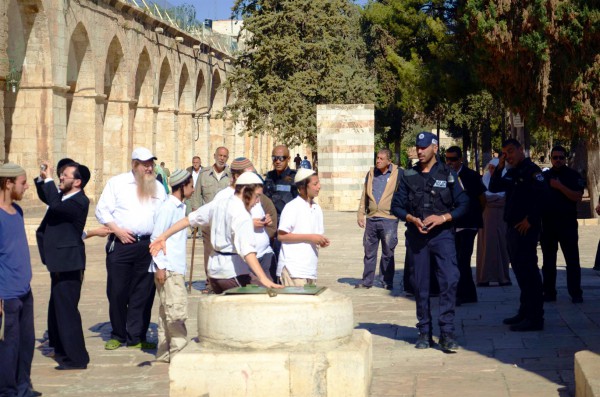 Jewish visitors to the Temple Mount must be guarded from malevolent groups that seek to harm and harass Jews on the Mount.  (Photo by Michael Jones)

The statement emphasized that the two groups, one for men and one for women, formed “a central component in the creation of tension and violence on the Temple Mount in particular, and Jerusalem in general.”  (JPost)

The Ministry describes their activities as engaging in “dangerous incitements” involving tourists, worshipers, and visitors to the Temple Mount that can lead to violence and endanger lives.

The members of the group are drawn from the more activist Arab communities in the north of the land and are being bussed to the Temple Mount daily.

Ya’alon said the ruling was necessary to protect national security and the public order.  Precedence for the law is actually drawn from a similar emergency law established during the Mandate period by the British government to confront Jewish paramilitary organizations during the years prior to state independence in 1948.

In announcing the decree, Ya’alon said that Israel “allows freedom of worship to all of its citizens and to the tourists who visit it, irrespective of religion, and it sees this as a basic, central, and important value.  But we have no intention of allowing violent elements that incite [violence] to harm public order and threaten the peace of worshipers—especially in a sensitive and holy site like the Temple Mount.”  (JPost)

Jewish activist Yehuda Glick who has been fighting for three years for the right of Jews to worship on the Mount said, “Thank God.  Better late than never.  I have appealed to the police since this whole thing began in 2012.  It took a while, but the state made the right decision.”  (Times of Israel) 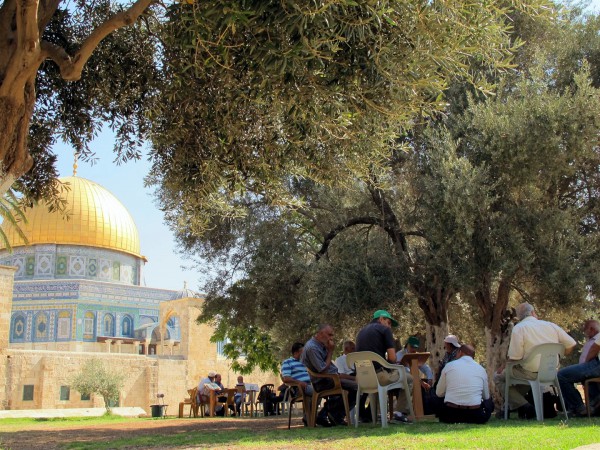 The Temple Mount is Judaism’s most holy site and the third most holy site for Muslims.  But while Muslims are free to form relaxed study groups on the Mount, Jewish visitors are not even allowed to appear as though they are praying.  They are harassed while they visit and monitored closely be the police for any sign of an action that Muslims might find offensive.

Using it as an excuse to incite more violence, he said, “This is an assault on al-Aqsa, because these women [Murabatat] defend al-Aqsa.  It shows that the Jews covet al-Aqsa mosque and want to drive all Muslims out of it.”  (Times of Israel)

Recent experiences on the Mount have been very unpleasant for non-Muslim visitors.

In a piece for The Jerusalem Post, journalist Lahav Harkov described her experience visiting Temple Mount as humiliating.  (Reporter’s Notebook: By the Temple Mount, we sat and wept)

But as humiliating as it was, she was surprised to learn that her experience was mild and that “the norm is for Israeli Jews to be treated like dangerous criminals just for wanting to walk around.”

“From the start, the sense was that the police work for the Islamic Wakf, which manages the site, and not for the citizens of Israel.  They treated us with disdain, and catered to and tried to anticipate every inane complaint by Wakf staff,” she wrote.

“‘Don’t make this a hard day for me,’ the police officer sneered at us.  ‘No praying.  No bowing.  No lying on the ground.  No singing.  No dancing.’” 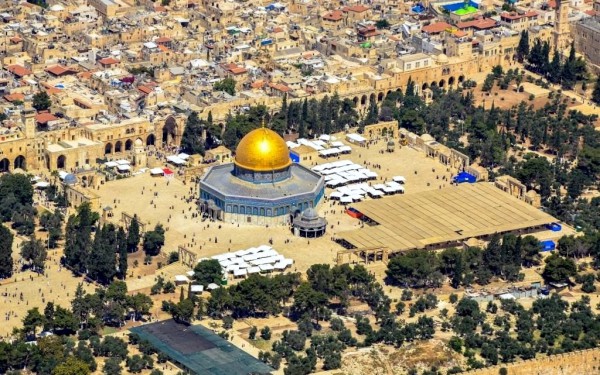 Aerial shot of the Dome of the Rock portion of the Temple Mount.  (Photo by Israeli police)

And although she dressed modestly, according to Orthodox Jewish tradition, her clothes were challenged.  Women wearing black, members of the Murabatat harassed her as well as her mother and sister, yelling “Allahu akbar (God is greater).”

Three Temple policemen and 12 Waqf bodyguards surrounded her tour group at every step.

“I was frustrated,” Harkov wrote.  “I’m not used to being treated like I’m guilty for existing.”

In another revealing incident, an Orthodox man had asked the police for permission to drink from a nearby fountain.  Instead, they gave him a bottle of water.

The police then arrested him for saying the required blessing before sipping water. 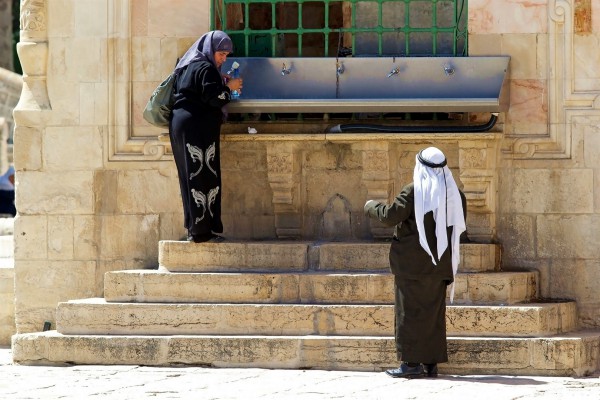 While Muslims are permitted to drink water from fountains on the Temple Mount, Jewish visitors are prevented from doing the same.

In a similar incident, a boy was arrested by the police when he went to the Temple Mount to celebrate his Bar Mitzvah and was caught saying the Shema prayer of belief in one God aloud.

Although the courts have repeatedly defended the rights of Jews to pray on the Temple Mount, the police are threatened by these Hamas-funded groups.

Wishing to avoid a violent outburst by these hired attackers, the police routinely bar Jewish visitors who even appear to be worshiping in order to keep the peace, as Harkov discovered on her tour.

As she listened to her guide and pondered the redemption that would come to the world, beginning on the Temple Mount, a policeman warned her, “You can’t close your eyes and cry.  That’s like praying.” 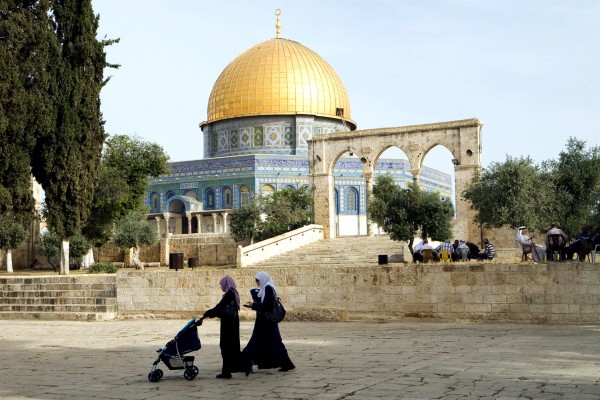 Muslim men and women enjoy free access to the Temple Mount, while Jewish visitors must be guarded from Muslim harassment.